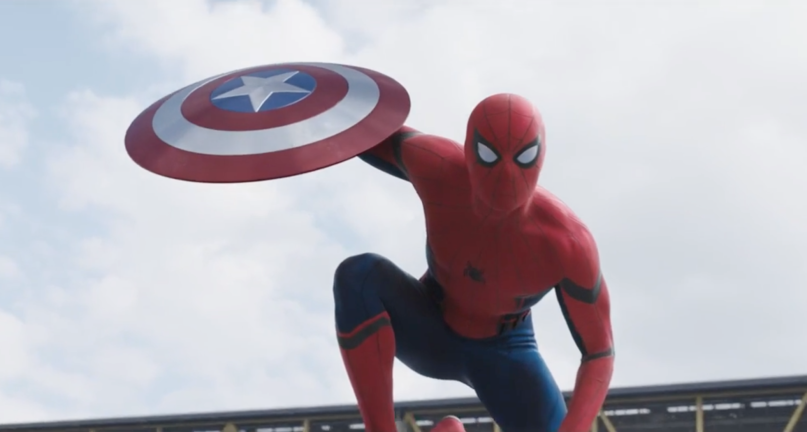 Marvel has just released a new trailer for Captain America: Civil War and oh, golly is it a good one.

The two-minute, 24-second preview gives fans plenty to salivate over. We get a lot more action from Chadwick Boseman’s Black Panther, Scarlet Witch (Elizabeth Olsen) duking it out with Vision (Paul Bettany), and the classic image of Ant-Man (Paul Rudd) catching a ride on one of Hawkeye’s (Jeremy Renner) arrows. Oh, and Spider-Man shows up.

Yes, the trailer ends with our very first look at Tom Holland’s Spider-Man, or as Robert Downey Jr.’s Iron Man calls him, “Underoos.” The costume looks a bit CGI-y and smooth, but the articulated eyes are pretty sweet, and… it’s the freakin’ Marvel Cinematic Universe Spider-Man, so squee! Plus, it looks like Spidey’s picked a side in the Civil War, so check out the trailer below to find out which one it is.

“Marvel’s Captain America: Civil War finds Steve Rogers leading the newly formed team of Avengers in their continued efforts to safeguard humanity. But after another incident involving the Avengers results in collateral damage, political pressure mounts to install a system of accountability, headed by a governing body to oversee and direct the team. The new status quo fractures the Avengers, resulting in two camps—one led by Steve Rogers and his desire for the Avengers to remain free to defend humanity without government interference, and the other following Tony Stark’s surprising decision to support government oversight and accountability.”