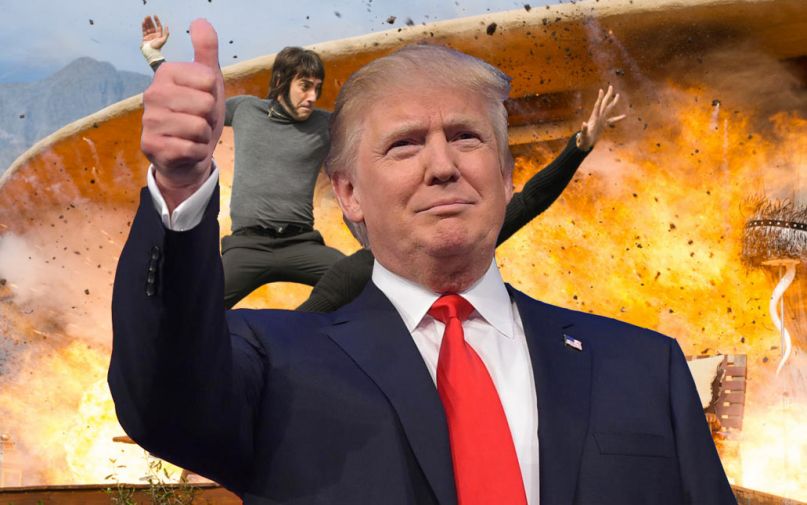 From the looks of it, Sacha Baron Cohen has made better movies than the forthcoming The Brothers Grimsby. Due March 11th, the action comedy seems to derive most of its humor from stupidity and sex. But there’s apparently one joke that sounds especially ridiculous. According to multiple reports from the film’s US premiere, the movie features a scene in which republican presidential frontrunner Donald Trump gets AIDS.

There in fact seems to be a subplot involving a fictionalized Trump getting humiliated, which ends (spoiler) when an equally fictionalized Daniel Radcliffe is shot and his HIV infected blood splashes into Trump’s mouth (end spoiler). Accounts from screenings around the globe claim that the scene in question has almost universally brought audiences to cheers and applause.

Though the movie began production in 2014 and the joke was written before the current presidential campaign made the billionaire reality show host the frontrunner, its timing couldn’t be more prescient. So much so that reports initially surfaced that Sony, fearing the notoriously litigious Trump might sue, asked Cohen to remove the scene from the film. However, a studio representative told The Hollywood Reporter that was “absolutely ridiculous.” Still, the movie does include a final disclaimer stating that neither Radcliffe nor Trump are HIV positive or were involved in making Grimsby.

The Cohen-Trump beef has been long-brewing. Trump once bragged that he was “the only person who immediately walked out of my ‘Ali G’ interview.” At the US premiere of The Brothers Grimsby, Cohen (in his Grimsby character) wore a “Make America Great Again” hat while swigging a pint, holding a gun, and eventually calling The Donald a demagogue.