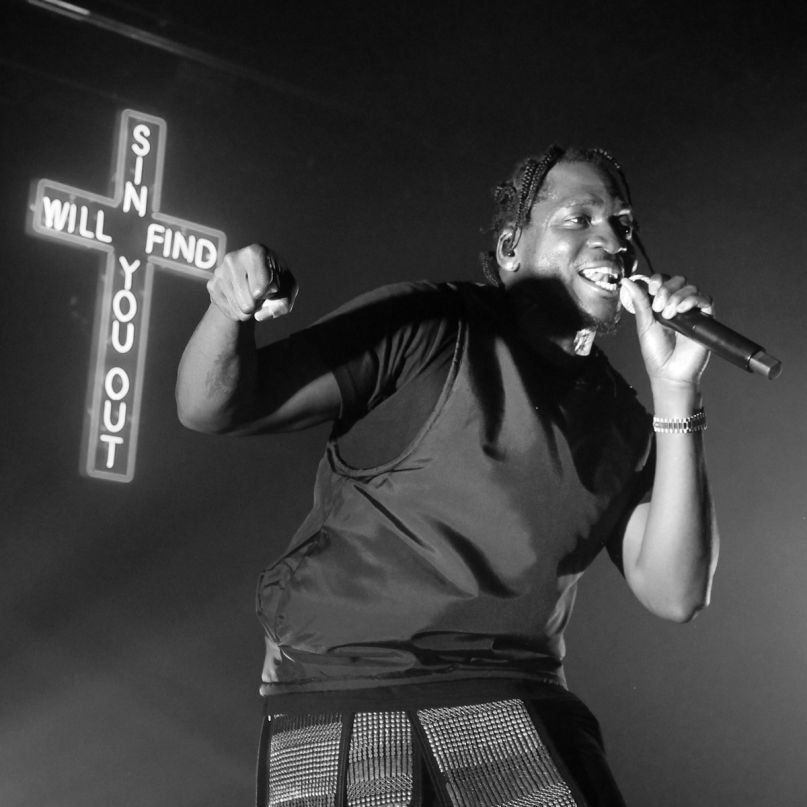 Pusha T may have risen to fame in Virginia Beach, but the Bronx-born emcee hasn’t forgotten where he came from. The G.O.O.D. Music president’s gig at New York’s PlayStation Theater was a triumphant return to a roaring, sold-out crowd.

“Gun Hill Road, Silver Towers – that’s where I used to live,” the rapper a.k.a. Terrence Thornton said. “Since I’m going back, we’re gonna take this music shit back to where we all began.”

Pusha T celebrated the past and his (second) homecoming with a Clipse throwback, “Grindin’”, which ignited the crowd with its booming drumbeat. The set also showcased the breadth of his influence as a featured artist, as he ran through Kanye West’s “Runaway” and “So Appalled”.

Of course, the show ultimately supported Pusha T’s Darkest Before Dawn: The Prelude. Performing beneath two neon-lit crosses that read “Sin Will Find You Out”, the emcee delved into his unabashedly coke-inspired set.

He performed the first few bars of “F.I.F.A.” without any instrumental backing, showcasing his verbal dexterity and flow. And the Yankees-inspired lines on “M.F.T.R.” (“No retirement plans, no Derek Jeters/ We all know I did it – Rodriguez”) earned one of the loudest callbacks of the night. Fans also eagerly took over the chorus on “M.P.A.”

As his main set ended, the emcee powered through “Crutches, Crosses, Caskets” and “Untouchable”, commanding the attention of the room as he shuffled from side to side onstage. After Pusha T exited, the DJ goaded a chant: “King Push! King Push!” The rapper returned onstage for a powerful rendition of “Sunshine” over the track’s minimalist beat.

Then he shifted to some of his most notable singles. Being able to pull from such a rich discography of popular, collaborative tracks cut both ways at the end of the set. The transition to the Cruel Summer remix of Chief Keef’s “I Don’t Like” got the crowd the most hyped. But the track lasted only through Pusha T’s opening verse and one run-through of the hook, leaving fans hungry for more.

The emcee alleviated this issue some on the following song, “Mercy”. As the earlier openers Lil Bibby, G Herbo and Bia emerged, the rappers ran through Pusha T’s verse and the hook twice. He then closed with a raucous rendition of “Move That Dope”. Pusha T clearly has the stage presence and charisma, so I’m calling it now: West-Thornton 2020.