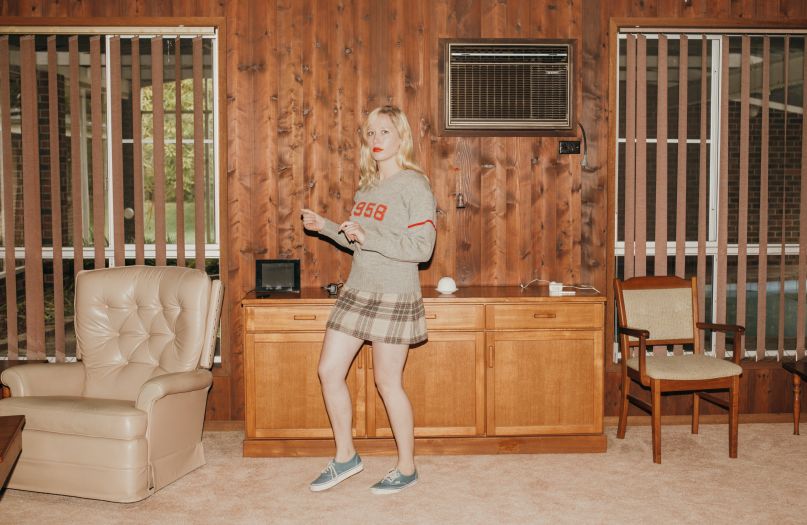 West of Sydney lies Australia’s impressive, rugged site known as the Blue Mountains. There, somewhere between the waterfalls and dusty foot trails, singer-songwriter Julia Jacklin grew up under the impression that she would become a social worker, but thankfully, a trio of musician hit her ears before she followed in her parents’ career path. The Aussie took notes on bold lyricism from Fiona Apple, vocal delivery from Angel Olsen, and the craft of intimate electric guitar from Anna Calvi. Now, with the three of those musicians sitting comfortably in her mind, Jacklin shares her debut single, “Pool Party”, and its accompanying video.

The 25-year-old musician uses turns of phrase to capture the pulls of substance abuse in “Pool Party”. The song, a detailed account of her partner’s drug use by the pool, gives a casual sigh in the alt-country vein, matching the timeless beauty of the Blue Mountains with a sunset heat haze and the rhythmic sway of eucalyptus trees. Lonely guitar strums, dance class drums, and gentle bass cushion her words as they fall: “I want to give you all of my love/ But I watch you sink as they swam above/ You are the land and I am the dove/ My heart is heavy when you’re high/ So for me why won’t you try.”

The song’s video draws out the time-stopping effect of drugs even more. In white, worn tennis shoes and an oversized sorority shirt, Jacklin dances in slow motion to a ballroom dancing contest on the room’s TV. Eventually, a man joins her in the room to exercise, doing everything he can to keep his heart rate up, circling around her as she sings. The whole thing feels a bit bizarre, like some Harmony Korine or Yorgos Lanthimos short film. Yet, there’s an earnest honesty here. Her slow-mo dance moves begin to feel like a child’s elementary school talent show performance: hesitant, basic, hypnotic.

In a press release, Jacklin recalled how her expectations for her future self have shifted over the years since deciding to be an artist. “When I was growing up I was so ambitious; I’m going to be this amazing social worker, save the world, a great musician, fit, an amazing writer,” she wrote. “Then you get to mid-20s and you realize you have to focus on one thing. Even if it doesn’t pay-off, or you feel embarrassed at family occasions because you’re the poor musician still; that’s the decision I made.”

Julia Jacklin may be poor, but there’s no need to feel embarrassed. She’s set to have a stellar 2016. Her upcoming full-length, Don’t Let The Kids Win, will be released later this year. In the meantime, catch her live at South by Southwest or back home in Australia. Those tour dates are below.