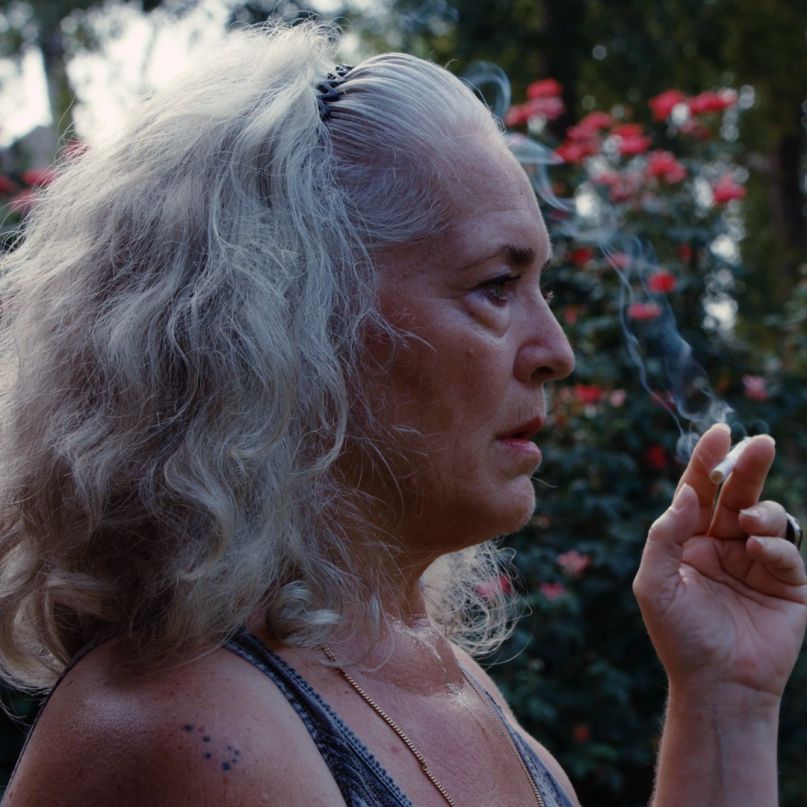 A crucial moment of Krisha unfolds with casual cruelty. The title character (Krisha Fairchild), a recovering alcoholic who is spending Thanksgiving with her family after abruptly disappearing on a quest of fulfillment nearly a decade earlier, sits with her brother-in-law. She arrives missing a finger, repeatedly dodging questions about how she lost it. It’s better to leave the past behind, she reminds everyone. He warns her that this will not be an option. “I know you were wounded, like some damn bird that just hit one too many windshields,” he says. “But I’ll tell you what, them cars are getting faster, and them wings are getting weaker.”

Krisha, directed by first-timer Trey Edward Shults, is a masterful opera of discomfort and hurt feelings. The action begins with a single tracking shot that explains everything we need to know about Krisha as a person: she sloppily drags a rolling suitcase through the grass as she struggles to find her sister’s house. Krisha isn’t sure which one it is. As she continues to ring the wrong homes, Krisha becomes increasingly frustrated with the endeavor, cursing up a storm. This is someone for whom daily life — even a seemingly small task, like opening a door — is extremely difficult. It’s not hard to see why so many have been closed on her.

Her isolation, even as she struggles to reconnect with those she lost, is broadcast in a way that feels both simple and revelatory. The atonal, often deafening soundtrack places the audience at a sustained distance from Krisha’s surroundings, and Shults’ fluid camera movements establish her interactions as both searching and lonely. While Krisha is helping to prepare dinner in the kitchen, she loses the kitchen timer and tries to locate it. On her mission, she catches sight of the son she gave up years prior, who refuses to even look at her. Krisha unconsciously starts to follow him, as if in a daze. The unflinching camera is close behind, illustrating how she’s always two feet away from the things she so badly wants.

Krisha is unbearably tense, but it draws its tension from real life — the buried heartaches and unspoken emotions that span decades. The casting is crucial to building that intimacy: Shults, who has a small supporting part in the film as Trey, Krisha’s estranged son, wrote the film as a starring vehicle for his aunt. In an inspired switch-up, he cast his mother (Robyn Fairchild) as his onscreen aunt, who adopted Trey after the fictional Krisha abandoned him.

The choice is highly reminiscent of John Cassavetes, whose films were a family affair. In 1974’s A Woman Under the Influence, the father of indie cinema cast his wife Gena Rowlands as a woman whose seemingly erratic behavior leads her spouse to commit her to an institution. The couple’s close friend, Peter Falk, played the husband. Their then-preteen children even worked behind the scenes. Krisha is deeply indebted to Cassavetes, who shared Shults’ interest in pressure-cooker family dynamics and women on the verge of self-destruction. But although Rowlands’ Mabel was a victim of the limited options available to women in the 1970s, it’s Krisha who is her own worst enemy here.

One scene illustrates that truth perfectly. After Trey confronts her for being an absentee parent, Krisha retires to her room to drink an entire bottle of wine. She opens it with a pair of scissors. Like a hooded slasher in a horror film, Krisha proceeds to slink to the kitchen and drunkenly remove the turkey from the oven. In a bravura shot, the image focuses on the slowly spilling juice as the audience awaits the inevitable. If Hitchcock once argued that films build suspense when the viewer knows that there’s a bomb underneath the table and can’t do anything to stop it, Krisha is a walking explosion just waiting to erupt.

If the inevitable confrontation between the irrepressible Krisha and her relatives feels rushed, that’s a small complaint about what ranks as one of the finest and most assured cinematic debuts in recent memory. Shults spent the last few years working at a P.A. for Terrence Malick, and it shows: like the reclusive auteur’s The Tree of Life, Krisha illustrates the grace in brokenness, offering not forgiveness but compassion for those who may have used up all their second chances. If Shults aspires to the greats, this stunning achievement shows he’s well on his way.