Film Review: Embrace of the Serpent

A surreal, transformative journey into the heart of darkness 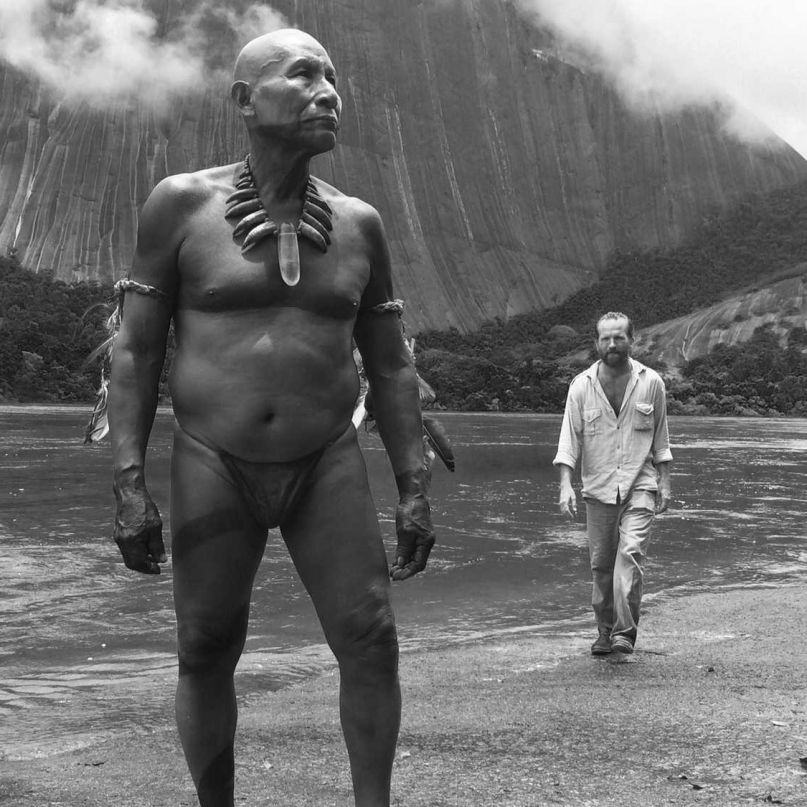 “…all I know is that when I came back, I had become another man.”
— Theodor von Martius, Amazonia 1909

Ciro Guerra’s Embrace of the Serpent ostensibly takes place in the heart of Amazonia, a region sustained both spiritually and physically by the snaking river at its heart. It is a region of unknowable borders — an “infinite jungle,” as German explorer Theodor von Martius describes it in his journals — but also one of strict divisions: life and death, natives and white invaders, this side of the river and the other side.

This is a place that seemingly defies every tenet of Western science, save for Newton’s third law of motion: every action has an equal and opposite reaction. “The jungle is fragile and if you strike her, she will strike back,” explains the Amazonian shaman Karamakate (Nilbio Torres) to a deathly ill von Martius (Jan Bijvoet), who has sought out the young native in hopes of saving his own life. In spite of his fierce distaste for white imperialists, Karamakate agrees to escort the German to a sacred healing plant called the yakruna. The plant only grows in the area where his tribe is from, and von Martius’ promise that some of them still live — that they haven’t all been slaughtered by the whites — is enough to bring him out of his self-imposed exile from the world and from the oncoming tide of history.

The jungle has long been an object of fascination and foreboding to those who approach it from the outside. This was especially true around the turn of the 20th century, when Joseph Conrad published Heart of Darkness, a novella that centers on a man driven to insanity in the heart of Africa. Later, filmmakers ranging from Francis Ford Coppola (Apocalypse Now) to Werner Herzog (Fitzcarraldo) latched onto this idea with gusto, using their visual medium to paint the jungle as a place of constricted wilderness, a sort of counterpoint to the wide-open spaces of the Wild West. The problem with even the most progressive of these films is their insistent focus on the white outsider’s version of the story. Natives tend to exist merely as part of the landscape; when they do step out from behind the foliage, it’s usually to fill the role of noble savage or cannibalistic monster.

The Colombian director Guerra does not fall into this ethnocentric trap. Karamakate is not only the film’s protagonist, but also the glue that ties its two storylines together. Forty years after his encounter with von Martius, the aged shaman meets another white explorer (Brionne Davis) in search of the yakruna plant, and he embarks on a similar journey with much different results. This time around, he is more resigned than defiant; his memory is slipping and he constantly refers to himself as a chullachaqui — a ghostlike alter ego that is “empty, hollow…he has no memories, only drifts around the world.”

As Guerra cuts back and forth between both storylines, we begin to understand how Karamakate ended up this way and how heartbroken he must have been to lose the world he had once loved. When the younger Karamakate encounters a group of native orphans at a Spanish mission, he admonishes them to “Never forget who you are and where you came from.” The fact that he has done so himself is not lost on the viewer, and the older Karamakate’s journey becomes one of self-preservation through remembrance.

Memory is a central theme in Embrace of the Serpent, as is the struggle for permanence in a world that is constantly threatening to erase one’s identity. In this context, Guerra’s decision to shoot the film entirely in black and white (excepting one impressionistic sequence at the end) takes on new meaning. There’s an abstracted quality to black-and-white film that makes an image appear more timeless, more authentic somehow. One might think the filmmaker mad for not taking advantage of the vivid colors of the jungle, but this is not a film about visuals so much as a film about the conflict between letting go of the past and holding onto it for dear life. Rendered without color, the Amazon also appears more alien to us — more entirely unknowable. This is a world that exists fully outside of our own, without even the most basic of sensory reference points to grasp onto for comfort.

All the same, Embrace of the Serpent is a clearly beautiful film, with images as poetic as its study of humanity’s destructive impact on the earth and on each other. It follows the river so far down that it ends up in a place that seems detached from the physical world, a place that extends beyond the limits of the human mind. The journey to get there is harrowing and breathtaking all at once, with images of brutal violence contrasted with moments of profound serenity.

By the film’s end, we barely know if it’s meant to be a faithful retelling of two real-life explorers’ journals or a fantastical, quasi-religious epic poem. More crucially, we barely know if the distinction matters. Like von Martius’ visit to the jungle in 1909, this is that rare film that has the power to transform, to shake one’s belief system so thoroughly that one feels like a slightly different person walking out of the theater. If there’s a better argument for a piece of art than that, I’d sure like to hear it.