The iconic filmmaker discusses his "spiritual sequel" to Dazed and Confused 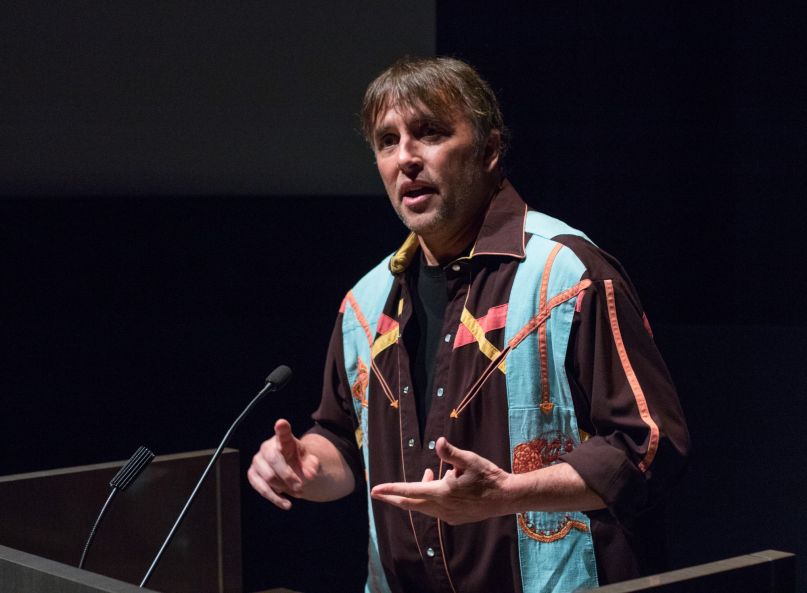 It has never been difficult to find the threads that bind Richard Linklater’s filmography.

Most prominently, there’s the trilogy that constitutes his Before series, while animated sci-fi thriller A Scanner Darkly is in many ways the nightmarish sibling to Waking Life’s philosophical dream. Boyhood, Linklater’s 2014 film chronicling 12 years of a boy’s adolescence, ends with protagonist Mason heading off to college. His latest film, Everybody Wants Some!!, more or less picks up where Boyhood left off, albeit with a time jump back to 1980 and freshman baseball pitcher Jake taking over the lead role.

Sitting in a conference room at San Francisco’s Ritz Carlton the morning after a screening of Everybody Wants Some!!, Linklater says he embraces the way in which Boyhood transitions to his latest film, though he swears it’s mainly a matter of serendipity.

“I conceived them at the same time,” he explains. “I started shooting Boyhood when I started writing, or thinking, about this. I spent a few years just taking notes, and at the same time I was thinking, ‘Well, I have this film about growing up, but I also had this college movie.’”

The critical success of Boyhood — a film that ultimately garnered six Oscar nominations and a win for Patricia Arquette as Best Supporting Actress — brought with it a rare opportunity for Linklater.

“I’m always trying to get movies made,” he says, “but it was the first time in a long time that somebody asked me, ‘What do you want to do next?’ I hadn’t been asked that in a decade.”

What Linklater wanted to do next was Everybody Wants Some!!, a film he started writing back in 2006. Previously, most studios had balked at the fact that the cast would largely be made up of college-aged actors, a demographic Linklater says doesn’t have a ton of bankable stars. That made it hard to get the film financed, but ultimately Annapurna Pictures saw what any fan of Linklater has known since the early ’90s: He knows his way around an ensemble film about young adults.

In one of the many memorable moments from 1993’s Dazed and Confused, incoming high school freshman Mitch is given the paddling of his life from a group of newly minted seniors. The scene is synced up perfectly with Alice Cooper’s “No More Mr. Guy”, a marriage of music and film that sees its nuptials renewed in Everybody Wants Some!!. Linklater’s latest film even has a hazing scene of its own, in which the new recruits on the college baseball team are duct-taped to the outfield fence for a spirited round of batting practice.

“I was always very upfront that this was sort of a sequel,” says Linklater, when asked about the parallels between Dazed and Everybody. “If you imagine Mitch’s character, played by Wiley Wiggins — you know we see him throw in a Pony League game, but if you imagine he got better and kept playing and got a scholarship, this would be where he showed up in college. It’s just a different guy, because I waited so long.”

While Dazed focuses in part on teammates of the Lee High School varsity football team, Everybody follows the new and seasoned members of a Texas college baseball squad during the long weekend of debauchery before the start of classes. Neither film is really about the sport in question, although before he ever stepped behind the camera, Linklater did spend some of his youth both on the gridiron and the diamond.

“I played football,” he recalls, noting that it’s not the ripest subject for comedy. “There’s no room for humor, because you could get killed. It’s like going off to war. If you fuck up, you’re dead.”

For Linklater, baseball is much closer to the arts than football, as it affords players more chances to relax and joke around with each other. He insists that, despite the “dumb jock” stereotype, some of the funniest guys he ever knew were his college baseball teammates.

Recreating that kind of camaraderie onscreen was pivotal, so in the downtime between casting and filming, Linklater invited the actors to a bunkhouse he owns outside of Austin. For three weeks, they spent their days rehearsing scenes, playing ball, swimming, and sleeping under one roof on bunk beds and air mattresses. At night, Linklater would screen period-appropriate films like Breaking Away, Animal House, and even No No, a documentary about the Major League pitcher Doc Ellis, who famously pitched a no-hitter in 1973 while tripping on LSD.

“I wanted them to see kind of the irreverent athlete of the ’60s and ’70s,” Linklater explains. “I was trying to get those guys into that irreverent spirit of the times.”

Those weeks Linklater spent with his cast at the bunkhouse also gave him a chance to truly solidify his film’s story. “By the time we’re shooting, we’re pretty set,” he explains. “But those three weeks when we all live together? That’s when it’s all up for grabs. That’s when I’m making the movie, when I’m discovering everything. That’s where you find the characters.”

In one of the film’s early scenes, Jake is crammed into a car with four of his teammates as they head to a bar for some afternoon drinks. The Sugar Hill Gang’s “Rapper’s Delight” comes on the radio, and the whole car takes turns spitting verses. Linklater chose the song, which he calls “the Rosetta Stone of hip-hop,” because he was tired of seeing it endlessly parodied.

“I enjoyed taking [that song] back and saying, ‘Well, here’s what it felt like at that time, to have something like that just on the airwaves.’”

In the days leading up to shooting the scene, Linklater instructed the actors to perform the song — all 13 minutes of it. The scene is an important moment for Everybody, one that establishes the tone of the film. Linklater fought hard to keep it when the studio tried to make him cut it down.

Everybody is a film clearly intended for those who enjoyed Dazed. It’s a character-driven venture that places more importance on atmosphere than story. Acknowledging the bond shared between the two films, Linklater points out Everybody’s tagline on a blowup of the poster positioned next to him (“From Writer/Director Richard Linklater Comes The Spiritual Sequel to Dazed and Confused”).

“I thought it would be a subtle thing for people who knew the films,” Linklater says, “but then the marketing people got a hold of it. It’s alright with me, because it just happens to be true.” Perhaps the biggest difference between Dazed and Everybody is actually Linklater himself. He says that, while he always knew he was “a little older” than the cast he was directing, meeting their parents at the film’s premiere was a bit of a reality check.

“Instead of being the cool older brother or uncle I was in earlier parts of my career, I’m like technically their dad. When I met the cast’s parents, I was like, ‘Oh, we’re the same age.’ When I was in college, none of them were even near being born. So the gap’s getting bigger.”

Still, as Linklater’s films so often convey, growing up isn’t all bad.

“I can’t help but think I’m a better director,” he muses. “I’m more confident. I know what I’ve done. I can suddenly see what went wrong in my other movies, in little ways. I do that in every movie, and you just carry that forward to your next opportunity to get it right. That’s how the coach would approach it.”