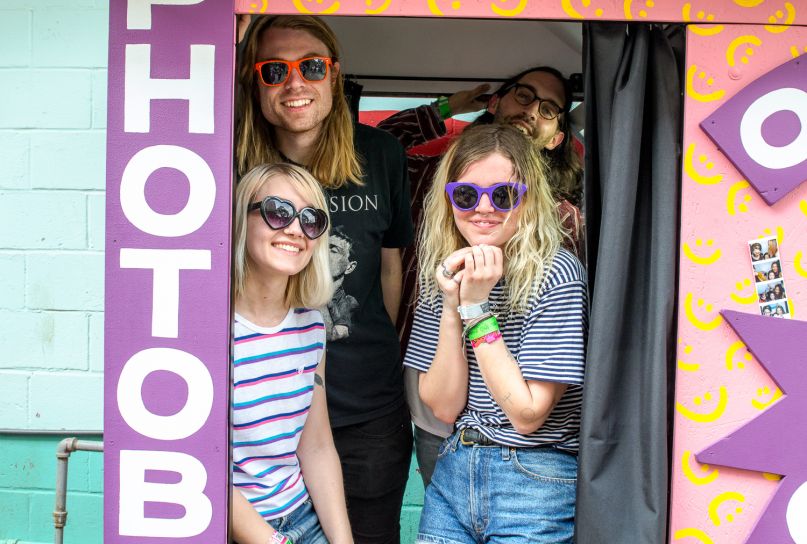 “Honestly, I was just born to do this,” Maryn Jones tells me in a hotel lobby before her band, All Dogs, plays one of their final South by Southwest shows. “This” is, of course, making music. She’s known for years, but started seriously focusing in 2007 when she was 19. Living in Boston, she desperately wanted to be in a band, but couldn’t find one that fit.

“Everyone was a lot older,” she recalls, “and there was just a lot of dudes playing in bands, and I was like, ‘I want to be in a band, but I only know one or two women that play [punk] music in Boston.'” She befriended Columbus outfit Delay when they came through and ended up visiting them in Ohio, where she discovered a completely different scene. “I think one of the first shows I went to, it was a band of all women,” she says of that fateful visit. “Everyone was just really nice and really supportive and encouraging … I feel like this was before there was a big push to make music more inclusive, and so it was really striking to me.”

She soon left Massachusetts for Ohio, eventually forming All Dogs with bassist Amanda Bartley and Delay drummer Jesse Withers. They recorded a split tape and 7-inch as a three-piece before adding Philadelphia-based guitarist Nick Harris. Where prior songs were written by Jones and handed off to the bandmates to add their parts, their debut record, Kicking Every Day, was far more collaborative. “It was more like, ‘Here’s a guitar riff. I don’t know what to do with it. You guys help me.’ Or Amanda would write a guitar riff and be like, ‘Do you guys like this?’ ‘Yeah, I’ll write a melody. Let’s bring it to Jesse.'”

As a second guitarist in a second city, Harris’ parts came together much like the earlier recordings did. However, that might not be the case for long. “I’m moving to Philly any day now,” Jones reveals. Though she found new life in Columbus years ago, the local basement scene began dying as people got older and started families — “Just doing the thing,” as Jones puts it.

Ironically, her old hometown of Boston has since shifted to become the type of place Jones would’ve thrived. “I know so many women that play in bands there, and they’re like fucking badass and hardcore bands. And you know, that’s not the most important part of it, but it’s really inspiring.” Always willing to move with the scene, she sees what’s happening in Philly now as the same vibe that drew her to Columbus years ago, and it’s something she wants to be around.

In fact, she needs to be around music in general; that’s why she also plays in Saintseneca and has her solo project, Yowler. Yowler’s debut release, The Offer, was written within a year of Kicking Every Day, but as a different type of lyrical outlet. “All Dogs’ songs are really personal and about some personal things and like mental health,” she explains. “And so are the Yowler ones, but the Yowler ones are very intense.” Where All Dogs follows a theme of love’s toils, Yowler is more free. “I was just allowing myself to write whatever came out,” she explains.

Jones needs those options, because as wonderful as All Dogs’ “poppy songs that are played really loud” are, she knows her creativity craves multiple channels. “Honestly, I don’t think that I could ever be in one project, because that’s just how my brain works.” That said, the band knows All Dogs is something special. “I feel incredibly serious about it,” she declares, “and I feel very tied to it. I think everybody likes being in the band – I hope – and I feel like this is the first time for most of us that we’ve kind of taken on a project [with the goal of making it a career].”

Although she says the other band members may be on the cusp of deciding to continue on or “get real jobs,” there’s a joy in their live show that makes you hope they never do. It’s an open sweetness that makes you feel welcomed in the rowdy, poppy world they inhabit, full of honest melodies.

As Kicking Every Day gains more and more acclaim, signs point to All Dogs being a lasting pop punk outfit. Either way, Jones has all the makings of a powerful female voice in modern music. She’s drawn comparisons to Waxahatchee, Girlpool, and Mitski, something she speculates originates from them all being “women feeling just very real.” “I feel like a lot of times women in music become this symbol or something, just like a thing. It’s more about the fact that it’s a woman playing music, when it’s like, ‘I’m actually just a human.'”

Jones may be just a human, but she and the Dogs are making some utterly endearing music.