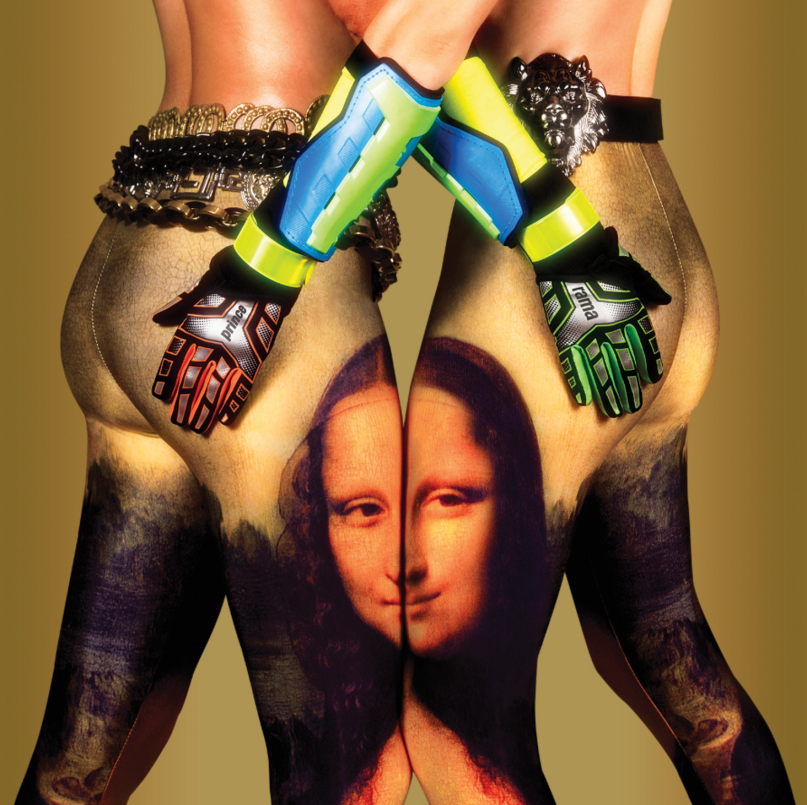 Image is essential to “Now Age” duo Prince Rama, and so is capitalism. It’s almost as if their music has followed the course of the commodification of the hippy culture over the decades. Take a look at their album covers. It starts pretty simply with Threshold Dances and Shadow Temple: geodes, skulls, trippy waves. Of course back then, the prevailing story surrounded the Larson sisters, and how Taraka and Nimai grew up on a commune and this kind of thing was in their blood. By the time you get to Top Ten Hits of the End of the World, the album cover focused explicitly on the market, a cheeky concept album in which they set themselves up as 10 fictional acts packaged as a compilation. The trouble, though, is that when you explicitly introduce the act of sale into a commodity/lifestyle driven by outsiderdom, you better have a clever, digestible message. Though fun, Prince Rama’s new album Xtreme Now finds the Larsons not yet delivering that clear note.

The cover to Xtreme Now puts a face to this corporatization of art, specifically Mona Lisa’s: The sisters wear tights depicting the famous portrait, along with neon power gloves left over from their faux-apocalyptic last album. Anyone that’s seen Prince Rama live in the last few years can vouch for the style and passion the sisters bring to the project. The facepaint is more neon than it was at the start, and there are more glowing synths in the mix, but the ritualistic polyrhythms and messages of empowerment still sit at the core.

That combination of hypermodern and classic mysticism could be fertile ground. Even if they frequently come across as delivering bland platitudes, Xtreme Now never comes off as half-assed or plain. The Larsons continue to push their image and themes forward. But one listen to opener “Bahia”, and the crux of the problem arises. The track details, apparently, a pair of cyborgs struggling with the concept of love. Or something. “Don’t ask me what the lyrics mean,” Taraka told Interview Magazine of the song. “I just watched a bunch of Go-Pro extreme sports videos on mute and tried to figure out what the score should be.” That lack of clarity in her answer comes across much more clearly than the cyborg concept, but that doesn’t mean the groove is any less funky.

Later, “Now is the Time of Emotion” works like a microwaved B-52s track, shifting between punchy punk and clap-along girl group sweetness, eventually fusing the two halves in a fist-pumping finale. That said, repeating the title won’t make you think much while you’ve got your arm raised. YACHT covers similar territory, but Claire L. Evans’ vocals always deliver the duo’s messages clearly, even to the point of hitting you over the head. Elsewhere, “Fake Till You Feel” reads like a Hallmark card version of Yeasayer. “You are calm, you are cool, 100% collected,” Taraka sings. “You are too young to be sad, too old to be cheating yourself.” These hippie platitudes might be tongue-in-cheek, but it’s not clear what the deeper meaning might be.

Maybe thinking about it is the wrong take. Look at semi-title track “Xtreme Now Energy”, a two-and-a-half minute track in which the lyrics about destruction and energy burn up in the jet fuel energy. There are echoes of Blondie, Van Halen, and more fluorescent party jams all over the album. But when you name songs “Would You Die to Be Adored” and “Shitopia”, you better clearly elucidate your message. Unfortunately, neither of those tracks do. “I try to listen but I don’t hear/ My head’s too cold, but my heart is clear,” Taraka sings on the latter. That’s a clear message, and one that sums the issue here. The Larsons have style and passion for days. They just need to nail down a poignant message to pair with al the flash.