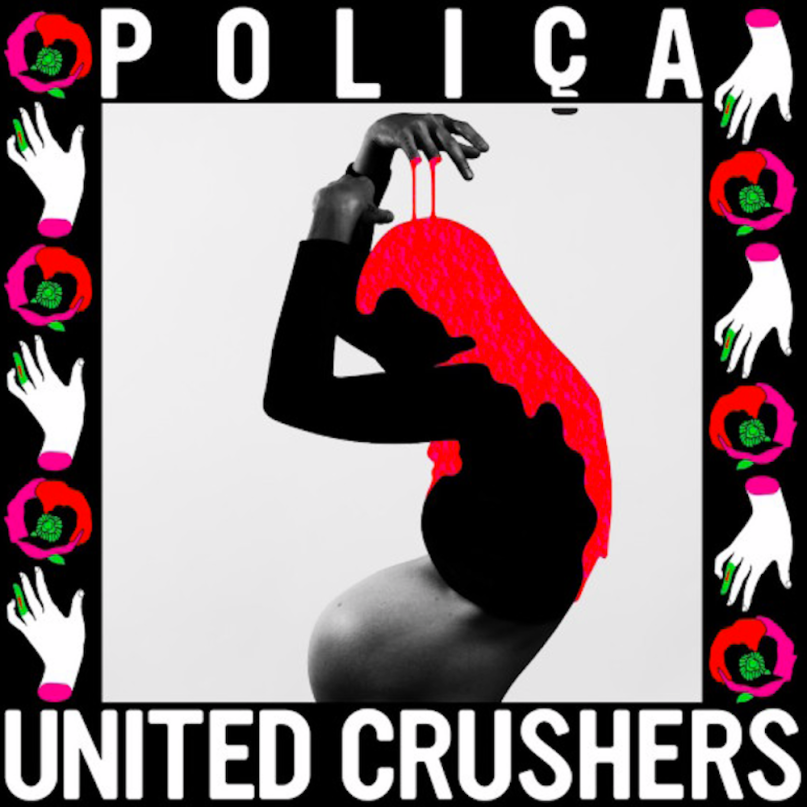 When Poliça came out from hiding to announce its third LP, United Crushers, the Minneapolis band laid out its internal map: “[It’s] heavily political and deeply personal with thick references to social injustice, self-doubt, and isolation, the rapidly increasing urban decline in gentrification, overcoming music industry machinations, and finding true and honest love in the wake of it all.” A lofty press release, for sure. Given the cover features singer Channy Leaneagh covered in tar-like lava, her pregnant belly round and protruding, it’s clearly a welding of personal and political, of a relationship bearing fruit while the world’s faults consume everything. As it turns out, it’s far more the prior than the latter — and had she decided that earlier on, the record could use that fuel to burn brighter than it does.

Politics are kept brief on United Crushers. “Every voice is like a click/ Trigger after trigger/ We don’t even know we’re sick,” Leaneagh sings on “Wedding”. As she verbally paints a scene of ash, beds of nails, bullets, and chains, we’re reminded of the nonstop police brutality that defined much of 2015 — and most of 2014, for that matter. The quartet recorded the album in El Paso, Texas. There’s no way they weren’t going to write a song about police brutality. After that, everything becomes deeply personal.

This is about shattered love. The call of gentrification and the rise of social injustice are both poetic in thought and action, but they’re mere hopes for the album. Leaneagh is digging into the shards of a broken relationship. Surface-level feelings soak in resentment. They’re there in “Lately” via the monotony of honeymooning (“Seems like we’re too comfortable in love/ Seems like this’ll be good for us”), in “Top Coat” via handholding (“‎I want my hand to be held/‎ You feel it/‎ He don’t feel me”), and in “Summer Please” via domestic abuse and childbirth (“Whatcha wanna be when you’re big enough to see it’s all shit?”). As she sings about a dissolving relationship on closer “Lose You”, with one-way wants, broken trust, and an invisible role in someone else’s life, her desperation finally hits — but only at the album’s end. United Crushers isn’t even about finding “true and honest love.” It’s about dealing with the world’s lack of that very thing.

And so as Leaneagh seeks healing, it’s never actually found. The possessive nature of titles claw at her on “Kind”, reminding her that she was the only one in the relationship who brought her secrets to the grave, for better or for worse. “All the dreams they die locked up/ Giving you less with each note,” she sings on “Baby Sucks”. She’s certainly not finding love, nor is she getting over it. She’s too hung up on revealing personal secrets and fearing the worries will consume her. As that builds, the fear of growing old without sharing those meanings hounds her. It’s all nutritious fodder for an album, but Poliça fails to shape it into meals for the listener.

Part of the blame falls on, of course, the music. Poliça don’t push themselves sonically. Their enticing debut, Give You the Ghost, had an immediacy thanks to dual drumming by Drew Christopherson and Ben Ivascu, the pair often times running wild in a fevered chase. Even their relatively flat follow-up, Shulamith, felt alive. United Crushers lets synths flop around, humming indistinctly. The drums lose their edge. Lead single “Lime Habit” creates a mild harmony worth repeating. On “Berlin”, bass finally takes the lead, reminding the listener that there is — somewhere deep in their memory, apparently — an understanding of how the rhythm section steers a song. Poliça are talented musicians. For whatever reason, they fail to flaunt that on the rest of United Crushers.

As Leaneagh sings about her descent on “Fish On The Griddle” — “I wonder about my friends, why don’t they call/ Could it be that I have none at all” — she points to the darkness surrounding them. The thing is, this isn’t their first jog around the track with storm clouds thundering overhead. These immensely talented musicians fall just short of conveying the totality of that feeling this time around. To be fair, it’s hard to find sonic resolution when you can’t find peace of mind in your own life. Yet, from front to back, it’s clear Leaneagh and the rest were too exhausted to even believe resolution, or at least its beginning steps, could be taken in a studio. For once, the darkness of Poliça’s shadows are too muddled to make the climb through them worthwhile.