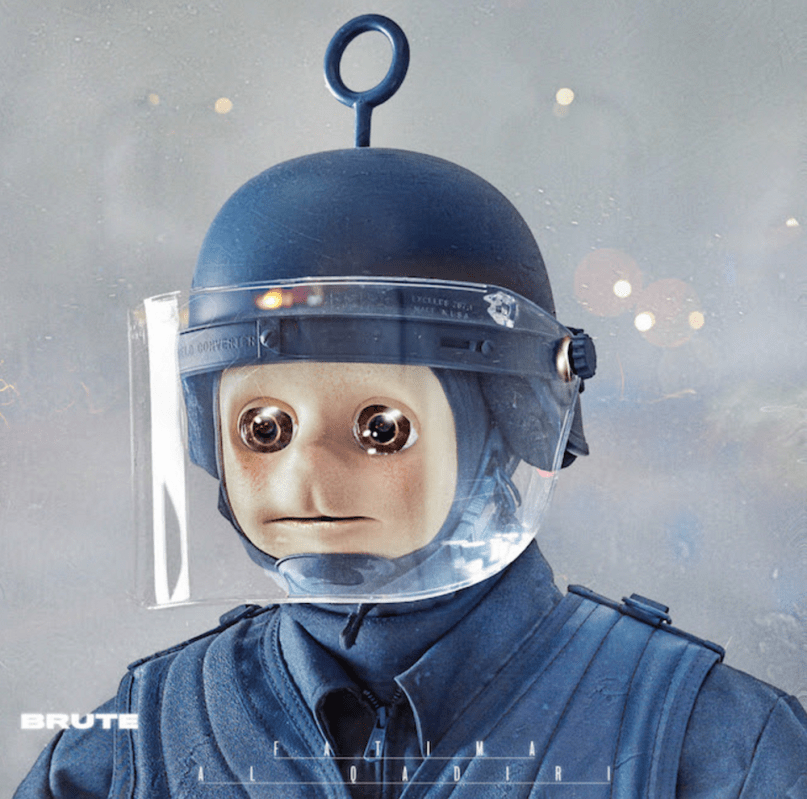 Based off the ramblings of many republican “debates,” America in 2016 seems to be sitting on the precipice of a great dystopian shift. Those from the left and right sides of the political spectrum prop up their “outsider” candidates, weary of the establishment’s continued prostitution to international corporate interests. From Washington to New York to Ferguson, power outweighs moral and public stewardship. Bloodied protestors, deleted emails, and corrupt media are all plot points in this self-fulfilling screenplay. Fatima Al Qadiri’s Brute is its forlorn score.

As noted in the sourced police-audio in lead track “Endzone”, these 11 tracks are more pointedly a statement on the over-militarization of America’s local police departments and the ongoing abuse of power. Cleverly sampling the incapacitating Long Range Acoustic Device (LRAD), the Kuwaiti-born producer offers a sonic account of the power utilized to deter political uprisings. Al Qadiri, though, uses the fragility of her signature minor chord progressions to rebut that aggression. Brute is the figurative black rose resting at the end of that still red-hot barrel.

The album is written from the perspective of the battered protesters Lawrence O’Donnell famously described during the Occupy Wall Street movement in September 2011. She borrows his audio for dramatic affect during “Blows”. Brute momentarily succumbs to that power; fear, anger, and freedom are all exhausted. “Oubliette” serves as the aural incarnation of this holding tank, the twisted echoes of a rusting wind-up music box.

A trained linguist, Al Qadiri has an acute awareness of human communication and the subtle impact of its many non-spoken factors. While the samples in “Endzone”, “Blows”, and “Power” serve to define the issues, the disc is predominately vocal-less. As such, the reach is far wider than even the corruption retired LAPD sergeant Cheryl Dorsey reveals during the aforementioned “Power”: “A lot of times I see police departments circle the wagon, not because they are really interested in protecting that officer, but they’re interested in protecting that entity.” Throughout “Battery” and “10-34”, these omnipresent forces — thanks to new surveillance tactics — are represented by an ever-lurking, low-end wake, with volatile harmonic breaks signifying the frequent outbursts of unmitigated violence.

The interplay between electronics and unintelligible moans during “Blood Moon” and “Aftermath” reinforces a sense of timelessness in the various forms of totalitarianism. Despite what history has offered us, many continue to champion a new generation of Machiavellian leader — a leader that asserts dominance through the forced dissolution of differing opinions. The downtrodden “Fragmentation” encapsulates the final days of that sort of challenge, the resonance of pure defeat. Al Qadiri understands that this isn’t the energy that will kickstart a revolution. Instead, she offers a candid glimpse of a frustrated mother whose neighborhood continues to crumble and hinder the development of its youth.

Absent from Brute is a solution. Often, it is these suggestions that further divide disenfranchised groups. As the American presidential election nears, we will hear each of the anti-establishment candidates provide widely different solutions for correcting America’s path. With both parties regularly hurling political grenades, Al Qadiri crafts a shield of disillusioned unity, a platform for a people’s resistance against these well-funded, heavily-armed, emotionally-stunted brutes before the dystopian state can take effect.