Damien Jurado – Visions of Us on the Land

Seattle songwriter concludes his psychedelic trilogy with a career highlight 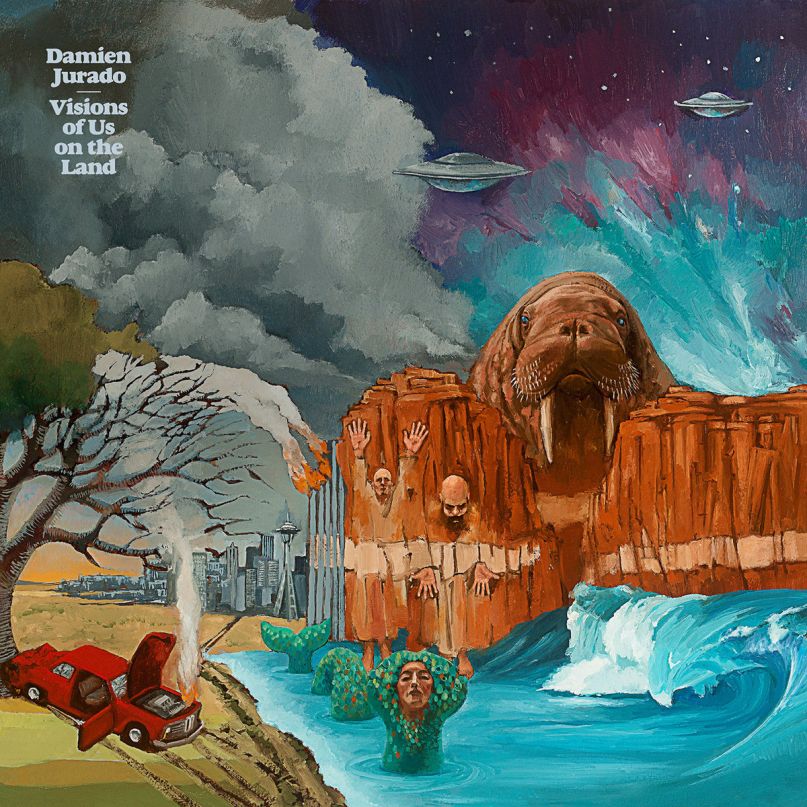 There’s a psychedelic, spiritual journey culminating on Damien Jurado’s latest album, Visions of Us on the Land, but it’s only one of two fascinating story arcs coming to fruition. There’s the journey of the character debuted in 2012’s Maraqopa, and then there’s Jurado himself. But before delving into the sprawling and inventive world Jurado has created, it’s important to zoom out and appreciate where the songwriter is coming from.

Jurado debuted in the Seattle scene in the late ’90s, serving as the singer-songwriter standout in a scene still grappling with the surge of grunge. This largely went unchanged for nearly a decade. Indie rock bands came and went, yet Jurado kept with his weepy, fragile, acoustic numbers. Not until the folk boom of the late aughts did Jurado find himself surrounded by genre peers. As such, he became something of a mentor; he began to frequent a flourishing open mic at the Conor Byrne Pub, where he’d meet members of up-and-comers The Head and the Heart and a slew of other folk upstarts. But just as folk-rock was beginning to hit the mainstream, Jurado pulled away.

Though he’d recorded as a singer-songwriter all this time, its never really been where his heart is. To hear him say it in a recent interview with Acoustic Magazine, music isn’t even really his main passion — he’d much rather spend his time painting. Within music, too, he seems to identify more with A.M. radio crooners than Woody Guthrie types. It’s when he teamed up with producer Richard Swift (Foxygen, Tennis) on 2010’s Saint Bartlett that Jurado began expanding his sonic palette, pairing his acoustic chiming with rumbling bass tones and hints of funkiness. The two forged a kinship that would push Jurado into unforeseen directions on Maraqopa.

That record introduced us to our nameless protagonist, presumably an alter ego of Jurado himself, as he finds himself in the mysterious town referenced in the album’s title. It’s a place that was a refuge for him, mentally, then actualized through music. By the end of the record, our hero gets in a car wreck which leads into the second album, Brothers and Sisters of the Eternal Son. Things get even more far out as our hero discovers a commune inhabited by people with names like Silver Timothy and Silver Donna. Now, on Visions, our hero is leaving the commune with Silver Katherine and traveling across a fictionalized version of the United States that only Jurado’s subconscious could produce. That all may sound like a lot of context to take in — and it is. But this is the payoff that Jurado has been building to over the last four years.

Visions opens up similarly to the last two records, with bombastic bass tones and flurries of strings and pianos. Lines like, “Hints of gin and your fingers in a glass” showcase Jurado’s unique ability to set the scene with just a few words. The momentum continues to build on “Mellow Blue Polka Dot”, with Jurado’s vocals echoing into maniacal laughs against the thundering drums.

Jurado subscribes to the Christian faith and, as such, there are subtle hints to it throughout his work. During the tour for Brothers and Sisters of the Eternal Son, Jurado would perform with the Silver Sisters Choir, a group of women dressed in white gowns. Jurado himself was quick to joke about the cult-like vibes, but it actually harkened back to an early age of church music filled with formality and sacredness. This helps make sense of the hymn-like quality of the songs in this trilogy.

The references are much more subtle on this record, seeking more universal truths than the God of Abraham. On “Exit 353” he howls, “Are we all not lost in song, feeding back until we’re found?” Later he cries, “You were with me all along, I let go and you held strong.” It’s basically a modern day retelling of “Amazing Grace”, albeit through a lens of self-doubt and massive theatrics.

These electrifying moments are clearly indicative of how much he’s morphed over the years. The ballads are now lifted up by the louder moments on the record. It’s a symbiotic relationship that lets a furious song like “Walrus” coexist with the delicate “On the Land Blues”. But Jurado’s always excelled at somber, and seeing him revel in the bittersweetness of a song like “And Loraine” proves his mastery of that feeling. His words seem to barely drop out of his mouth, letting themselves be carried by a gospel choir to their eventual destination. The phrase “such a long day” seems to drift in the air, crumbling out the window as Jurado’s character drives through a warm Californian twilight.

The synthesizer-tinged “A.M. A.M.” finally starts to find some peace on the record. “It was you all along,” he creaks in a real moment of realization. It’s another song about being lost in a three-album arc that’s, well, about being lost, but it’s also a love song for those who feel like they don’t know where they’re going, yet hang on to that one person that can be an anchor. It’s a cheesy sentiment when over-explained, but powerful when coming from Jurado’s weathered and wearied voice. This character’s love is an exhausted and desperate one.

“I will remember you the way you are right now,” he sings on album-closer “Kola”. It’s a line most likely sung to Silver Katherine as they part ways, but it could be a fourth wall break, Jurado addressing the listener. Even still, it could be the listener talking to Jurado. He’s done a lot of changing in the past few years, and he’d do well to savor this moment. But hopefully this isn’t where he stops. Jurado has finally left Maraqopa, the commune, the Silver Sisters, and maybe this whole world that he’s built — but there are plenty more worlds to explore. We’ve been graced with a look into his personal refuge, and it’s been beautiful. Until he designs his next world, it’s time to relish where he is — and who he is — today.