The Gaslight Anthem frontman finds himself in a familiar place, wishing he was anywhere but here 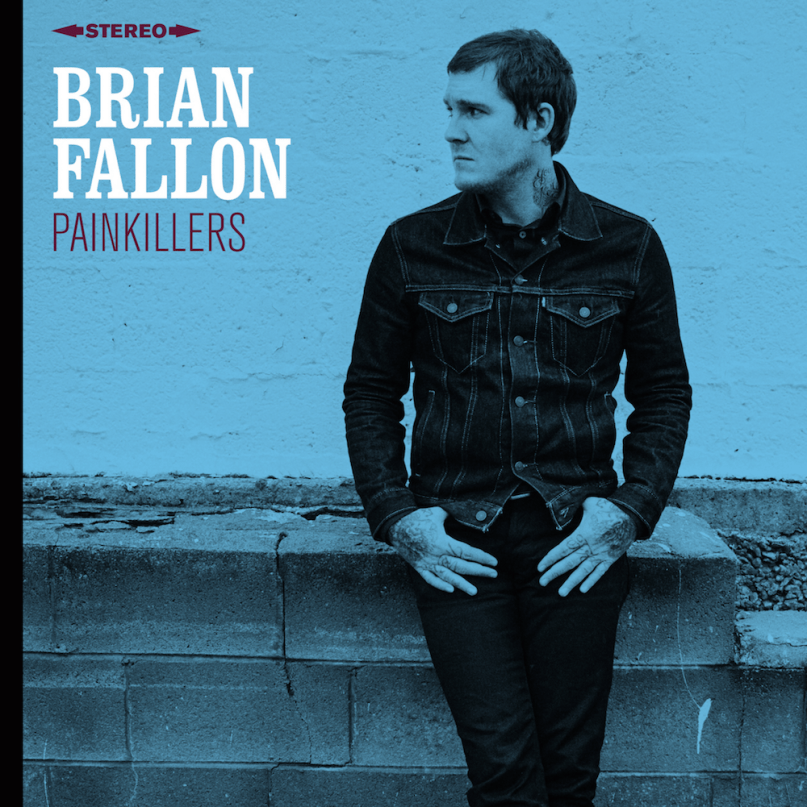 If Brian Fallon carries a talisman around in the pocket of his denim jacket, it’s probably a busted rear-view mirror torn off the windshield of the car he borrowed to joyride up and down the Jersey Coast when he was 17. No songwriter in modern rock music spends more time looking backwards. At various points on Fallon’s first proper solo album, Painkillers, he waxes poetic about being “beaten to death with regret,” drives around with old pictures plastered to his dashboard, or just sits inside a standard white apartment that reflects his present state of mind: “undecorated.” The past, on the other hand, is a mansion of thought that’s as lavishly decorated as Fallon wants it to be, its realities mixed with self-styled fictions until it’s hard to tell the two apart.

This has always been Fallon’s game, though to call it a game is to diminish how deathly serious he is about being someone else. “I always kinda sorta wished I looked like Elvis,” he sang on The Gaslight Anthem’s The ‘59 Sound, an album that found him sporting a black leather jacket on the cover and quoting Casablanca in the tracklist.

Fallon has come a long way since his band’s breakout success in 2008, but there’s a cruel, predictable irony seeping into his career narrative. The guy who sings about nostalgia for the past is having a hard time moving forward from his own successes. Fallon’s songwriting instincts began to flounder a bit after 2010’s excellent American Slang, largely because he misjudged just how many times he could mention late-night diners and girls named Maria before risking self-parody. The cracks that started to appear on 2012’s Handwritten became full-blown fissures on 2014’s Get Hurt, an album whose cover — a heart that looks kind of like a butt — is an uncannily accurate description of what’s inside. Now that Fallon has struck out, Painkillers feels like a way for him to prove that the purge was successful.

Painkillers, like any record with Fallon’s stamp on it, isn’t just obsessed with the songwriter’s own past. He fetishizes a purer, more idyllic version of America that no longer exists and probably never existed in the first place. His version of the American Dream is tied not to anything abstract or political, but to songwriters like Bruce Springsteen, Tom Petty, and Roy Orbison — men who sing about dancing in the dark, about driving all night with no particular place to go, about how even the losers get lucky sometimes.

It’s a fantasy that’s easy to get lost in for three or four minutes at a time, and in some ways Fallon’s version is even more effective than those of his forebears. On Painkillers’ title track, he sings of people who “want love like it was a drug,” but the real drug here is the intoxicating allure of a moment that’s gone and can’t be had back. In his novel Life Is Elsewhere, Czech author Milan Kundera explores an emotional disease in which the sufferer always feels on the outside of real life. This same disease spreads like a contagion across all 12 songs of Painkillers, making each feel like that photograph from Back to the Future, the contents disappearing right before your eyes.

It’s interesting, then, that the album begins with such an affirming declaration of wanting to live in the moment. “A Wonderful Life”, like much of Painkillers, owes a huge debt to Tom Petty and the Heartbreakers, but everything else about it seems angled straight ahead. “I want a life on fire,” Fallon sings between iterations of the same “Whoa-oh-oh” that punctuated so much of his Gaslight material.

The rest of the album shows that he still has a ways to go, but at least he’s playing to his strengths as a musician. The album veers between Americana-tinged roots rock, alt country, and the kind of anthemic punk Fallon cut his teeth on, and it’s a welcome return to form after the dreary, synth-heavy ballads of Get Hurt. Sure, some of the song titles sound like they were spit out of a Brian Fallon Random Name Generator — “Rosemary”, “Red Lights”, and “Long Drives” are presented in succession without a trace of irony — but he’s also willing to acknowledge his own foolishness.

One of the album’s standout tracks, “Among Other Foolish Things”, does just that in a jaunty acoustic number. “And they say such foolish things like ‘Love, love, love is all you need,’” Fallon sings in the chorus, before promptly losing himself in his own self-mythologizing poetry about throwing hearts into the sea and whatnot. But then something fun and unexpected happens: Before leaving the chorus, he catches himself sounding kind of silly. You can almost hear the ellipses as he realizes his own mistake and mutters, “Among other foolish things.”

Elsewhere, it’s hard to shake the feeling that Painkillers is the album Fallon would have penned after Handwritten if his personal life hadn’t taken such a turn. “Steve McQueen” is a vintage Gaslight song, recalling both “National Anthem” and “Here’s Lookin at You, Kid” with its fingerpicking style and the Life Is Elsewhere wistfulness of lines like, “This life is only chains/ It’s nothing like the colors in my dreams.” Every now and then he’ll throw a curveball like the bluesy stomper “Mojo Hand”, but Fallon isn’t trying to stretch himself too thin here. He knows that he’s best when he sticks to the usual influences and focuses on writing lines that young boys and girls will eventually get tattooed on their forearms, and so that’s what he does.

Painkillers doesn’t have to be the grand statement that will make Brian Fallon a household name. Like its namesake, this album feels more like a temporary solution than a permanent way forward. Fallon won’t be able to keep looking back like this and expect everybody else to care about what he’s seeing, but for now it’s sort of comforting to see him back where he belongs, wishing he was anywhere but here.

Essential Tracks: “A Wonderful Life”, “Among Other Foolish Things”, and “Steve McQueen”