To the horror of Morrissey, Morrissey stars in a new ad campaign for Supreme 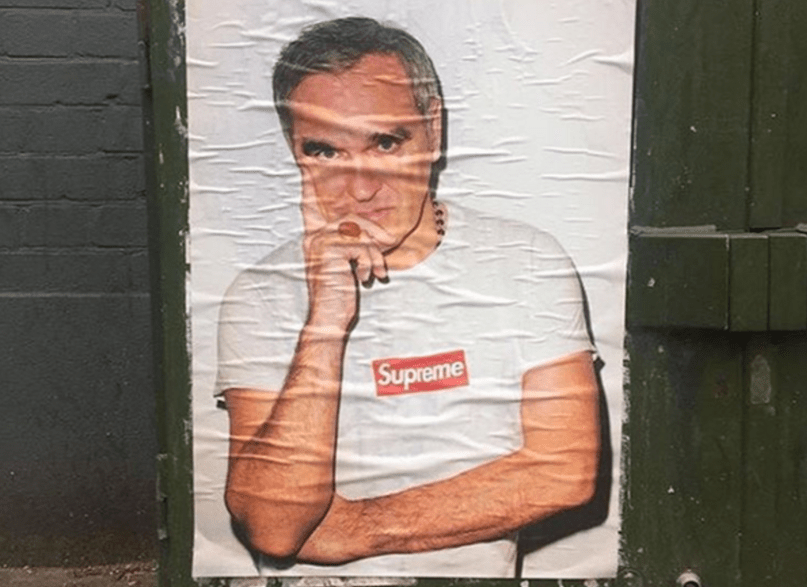 To the horror of Morrissey, Morrissey has followed the lead of veteran rockers like Neil Young and Lou Reed by appearing in a campaign for street wear company Supreme. You see, apparently Morrissey had second thoughts after the initial photoshoot and “pleaded with Supreme not to use” the photographs. Morrissey considered the photographs “fit only for a medical encyclopedia,” and also had gripes with Supreme’s relationship with “the beef sandwich pharaoh known as White Castle.” Nevertheless, Supreme’s new ad campaign, featuring Morrissey in all his medical encyclopedia glory, debuted this week.

In a statement posted to unofficial official Morrissey website True To You, Morrissey offered “excessive apologies for this association.” Morrissey also insinuated that Morrissey may take legal action against Supreme.

In response, Supreme has issued an extensive statement detailing Morrissey’s involvement in the campaign and why the company decided to go forward with the campaign sans Morrissey’s approval.

“In July of 2015 Supreme approached Morrissey to participate in one of it’s poster and T-Shirt campaigns. The scope of the project was explained in full detail to Morrissey, including the intended look, the setting, the photographer, as well as the items that would be produced: a T-Shirt and a poster. An agreement was entered which named the photographer as Terry Richardson, who has shot many of Supreme’s campaigns, and whom Morrissey has worked with before. Images of past campaigns were sent to Morrissey for reference so that the intended result was clear. Morrissey required a substantial fee for his participation in this project which Supreme paid up front and in full. The photo shoot lasted two hours and Morrissey was free to do, and pose as he wished. The agreement prohibits Morrissey from ‘unreasonably’ withholding approval of the use of photographs taken at the photo shoot.

“After offering Morrissey several options of images from the shoot, Morrissey rejected them all with no explanation. Instead, Morrissey insisted on using a photo that he had taken of himself wearing a Supreme T-shirt for the campaign. This image was later made public on Instagram by his nephew.

“Unable to use this image Supreme repeatedly offered Morrissey three very reasonable options as a remedy to the impasse: 1) To do an entire re-shoot at Supreme’s sole expense, 2) To select one of the many options from the shoot with Terry Richardson that were offered to Morrissey, 3) To return the money that was paid to Morrissey by Supreme.

“Morrissey repeatedly ignored all three options with no reason given as to why. He then proceeded to assert a sudden and ridiculous claim that because Supreme had used the White Castle logo on a group of products in the past, and because he is a known vegetarian, that the agreement was supposedly terminated.

“In light of this ploy, Supreme once again requested the return of the money it had paid to Morrissey so that both parties could walk away from the project. However, he refused.

“After many attempts to solve this problem, and left with no other viable options, Supreme proceeded to publish these images as per it’s agreement with Morrissey.”