The acclaimed directors set their comedic sights on a new Hollywood target: the stars themselves 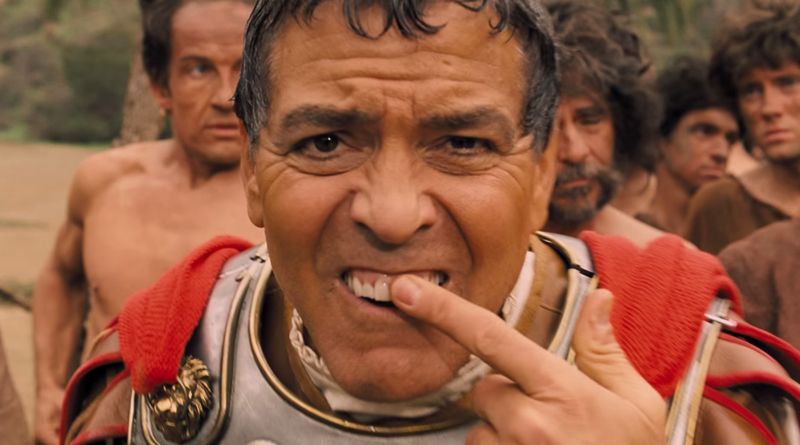 Recently, super director Christopher Nolan wrote a fond farewell to David Bowie. Keep in mind, Nolan’s accrued a reputation as a director of patient resolve, one who carefully, even clinically, finishes films on time, under budget, and without re-shoots. The man’s a machine. But that didn’t stop even him from gushing and gazing at the late, great Bowie on the set of The Prestige. Nolan wrote for EW: “Normally when you meet stars, no matter how starry they are, when you see them as people, some of that mystique goes away. But not with David Bowie … I thought that was quite magical.”

It’s funny to think even a person perceived as level-headed and to-the-line, like Nolan, will freak when he actually gets to see a star. Everyone does. Well everyone but these two guys.

Joel and Ethan Coen aren’t susceptible to smiles or pomade.

The Coens may work with Pitt and Clooney, but one gets the sense that they work regularly with megastars because the two just aren’t all that intimidated by them. They’re directors with a reputation of “just read the exact words as written,” and while stars in their own right, they’re human antidote to glitz. They got George Clooney to be a sex animal in Burn After Reading. The brothers forced William H. Macy to cry in whitey tighties in Fargo. They even got Channing Tatum to stick his face in another man’s crotch for corny comedy in the new Hail, Caesar!

With Hail, Caesar! opening nationwide, right now might be a good time to call cut and look at Hollywood inside humor, perceptions of celebrity and their craft, and what makes the Coens such ideal satirists and acidic heirs to the works of Vincente Minnelli or Francois Truffaut. Are the Coens nihilists, or a pair of people able to smirk at bad behavior? Are stars worth the perceived risible nature? The Coens seem to get the huffy nature of Hollywood and have forever distinguished themselves as smart-aleck observers of selfishness. They know what dark things lie in the hearts of man, or less grimly, they know how bratty or insecure people can be. And somebody’s gotta be willing to take aim at the US and People Magazine mantra of movie-making.

Hail, Caesar! has us thinking about Hollywood and all its holier-than-thou reverence. At least, well, in the eyes of the public, they’re saints and bank notes. Maybe this perception is not necessarily helped by the people who employ them.

Last year, ousted Sony movies head Amy Pascal was at a Women in the World conference discussing her experiences at the top of Columbia Pictures, one of the largest Hollywood studios in the world. After a very public, embarrassing, and literally career-ending email scandal, Pascal was bare-knuckle about her reminiscences. Running a movie studio and keeping product and art in peaceful coexistence sounded nightmarish. However, among the key stingers, she now infamously called actors “bottomless pits of need.”

Hell, why stop at actors?

Perhaps these suspicions boiled over while recently witnessing a million-Tweet meltdown by Kanye West, but artists aren’t just pits of need; they’re time-sucks, black holes, locusts praying on paychecks, sensitive flowers, forces to be reckoned with! Well, should the creative process be hampered in any way, shape, or form? Actors, writers, directors, and most dire of all, stars, are a beast of burden, and god help us … we love ‘em to death. Sure, Will Smith hides in a two-mile trailer and may tank while going serious with the likes of Concussion, but popular consensus is that he’s still a pretty huge deal. Bill Murray may have alienated dozens of co-workers over the years, but the myth of Murray as a sort of comic party crasher and Buzzfeed love list still outweighs any of that naughty stuff. We still quietly love the studio system, celebrity, and the Hollywood as America’s fanciest export. Yeah, yeah, gripe all you want about the unfairness of artistic commerce, but $1.5 billion and counting is a lump-sum hint that people around the world want to see Vin Diesel flex and make his American muscle cars growl. We still worship at the altar of the shiniest stars; they charm us, lower our defenses, and render us doe-eyed. Even when the star comes with some nasty, hard-to-shake glitter and gossip. Even Bill Cosby and Melvin Gibson have their super fans, lord have mercy. But it’s not like we weren’t warned.

There’s a giddy history of film about film. From Minnelli’s Bad & the Beautiful to Truffaut’s Day for Night to Mamet’s State & Main to even Tropic Thunder, there are common themes within the system being depicted. Ego. Secrets. The cost of glamour. The victory of teamwork. The often lost attempt to achieve actual “art.” Movies about the Hollywood caste system and stars being on top in public and executives on top in private often depict the give-and-take in trying to make movies. Stars are often perceived as head cases, kids with guns (the guns being clout and cash), while writers or execs or directors have to make heads or tails of a production. Perhaps it’s wish fulfillment on the part of filmmakers to make themselves look heroic and organized, or these movies really all make stars look dopey because maybe they really are. Hail, Caesar! is the latest addition to the behind-the-scenes column, and it’s a doozy.

Hail, Caesar! is a punchy farce on ‘50s cinemania, complete with star troubles and studio games with deep tides of Christianity and communism flowing over it. It’s a film structured around star troubles, in a time when those troubles were kept secret at great pains and expense. The Coens, while snarky, make their observations with a sort of easy-to-misunderstand love and affection.

They weren’t dissing Minnesotans in Fargo, per se, but capitalizing on their texture as a reinvention of crime archetypes. The Big Lebowski isn’t solely a mystery or a riff on drugs, but something blazingly in between. And Barton Fink laughs at and pities its main character for his often failed attempts to create, even if he is a blowhard. They write what they know and how they feel, and Caesar seems like the product of their ‘50s births and filmic upbringing.

To understand the Coen mischievousness and misanthropy towards “Hollywood-types,” there’s no better case study than Barton Fink. An owl-eyed, frizzy-haired John Turturro played the titular scribe. He was a Jewish, left-wing New York playwright with a passion for purity in his prose. He was the model self-serious artist. Fink is wiry, intense, extremely antisocial and really just socially awkward. Fink constantly pitches his work as something serious and meaningful and moving for “the common man.” His repeated cry becomes a running gag as Fink’s constant whine becomes disingenuous, until eventually becoming true again. The Coens pitch a fit at the creative process and all the gusto that can bruise and bury the efforts and conciliations made in making a release date or a studio’s need for certain kinds of product. Yet, they feel for Fink.

It’s with a grim irony that Fink professes to make words for the proletariat, while his Hollywood rising is surrounded by loud, cantankerous producers, a sullen and drunken writer of once-enviable talents, and most cravenly of all, a madman with a shotgun sleeping next door to Barton. Yes, this is black comedy of an unbelievable order, one that sets the system aflame and prays the seeds of Fink’s wrestling picture script and his failures will be the seed for something new and wonderful (although it’s not very likely given the nature of Barton’s beasts). Of course, the Coens thought Hollywood was an eight-armed monster back then, and they do now. But this time, the system is looked at with a fresh limb to lop off: the stars themselves.

The Coens have entered new comical territory for star ethos in Hail, Caesar! Light, jittery, and always ready to share a problem, the film luxuriates in the business affairs of making a movie. Josh Brolin is Eddie Mannix, a studio hotshot manager who screams at his lead after a big screwup to go out and “be a star!” Spoken like a true boss, Mannix and his manic stable of stars show up the delicious ironies of stardom. Channing Tatum, a star in his own right, makes Gene Kelly musicals about sailors and being All-American. Yet secretly, Tatum’s character is a fancy boy communist sympathizer. Scarlett Johansson is a bathing beauty with skin-tight suits, who also has the mouth of a Jersey trucker and serious gas issues. We won’t even begin to pick away at the likely true rumors about handsome super star Baird Whitlock (George Clooney) and how easy he is to goad into bad choices behind the camera.

That is to say, Hail, Caesar! is the latest chapter in studio funnies and star dummies, made with a reflective and postmodern twist. It mediates restlessly the balance between what the people want and what the people on the lot did. A daring bouillabaisse. It also stares at the long-lost American mythos of faith and politics through popular films of that era in a way that dictates character actions. And the Coens, as filmmakers within indie and mainstream hemispheres, know every facet of folly within. Lord knows stars shine bright, but the Coens are even better at shining a light on them. Comically and critically.

Who else could get “Pretty Boy Pitt” to take a bullet to the head?