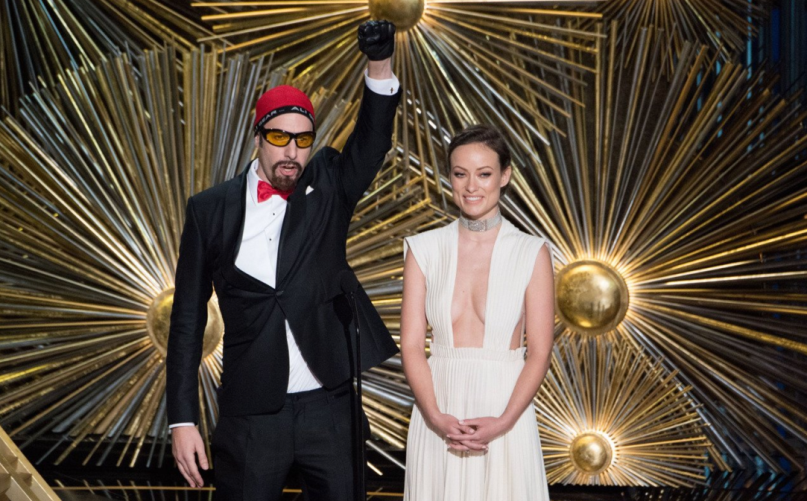 There were lots of memorable moments at last night’s Oscars ceremony (and more than a few odd and boring ones). In an already racially-charged evening, however, one thing that stood out for its humor and poignancy was the unexpected return of Sacha Baron Cohen’s Ali G character. As it turns out, fans weren’t the only ones surprised by the risqué persona’s appearance — so were the Academy Awards producers.

“The truth is we actually had to sneak it in because the Oscars sat me down before and said they didn’t want me to do anything out of order,” Cohen revealed to ITV’s This Morning (via The Daily Mail). “They wanted me to actually present it as myself. But luckily my wife [Isla Fisher] put on the Ali G beard in the disabled toilets so we managed to get away with it.”

Cohen was there to introduce the Best Picture nominee Room, but instead used his stage time to put on the famous skull cap and beard and offer his support for actors like Will Smith and Idris Elbow. “And of course that amazing black bloke from Star Wars … Darth Vader.” As Ali G, he also backed “all peoples of all colors” asking, “‘Ow come there’s no Oscers for dem very hard-working little yellow people with tiny dongs? You know, de Minions.”

The actor said he was unsure about some of the jokes he had planned, but got some encouragement from worthy host Chris Rock right before he went on. “I mean there were a few moments I was a bit worried how they’d react to the first gag, but I bumped into Chris Rock actually on the way on and pitched him the gag and he gave me the thumbs up so I went for it.”

Went for it he did. Revisit the unannounced gag below.