Noisey’s Back and Forth: A conversation between Alice Cooper and Andrew W.K. 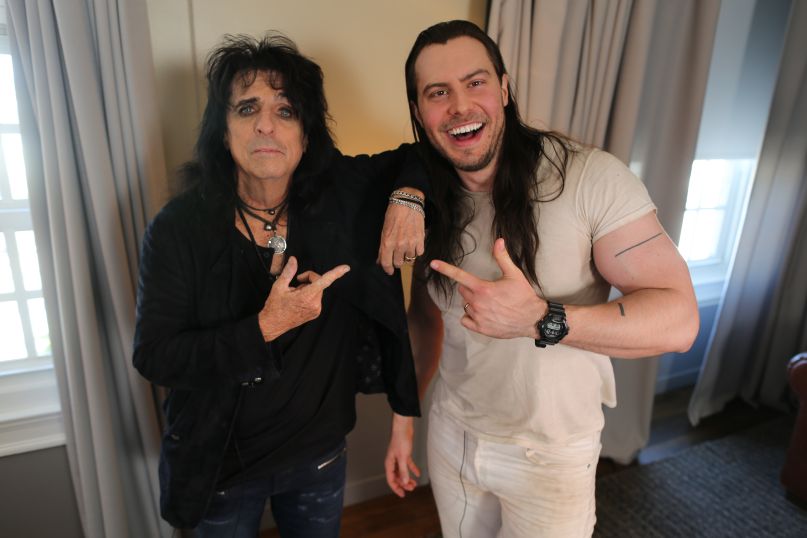 Talking shop isn’t often a spectator sport, but when the commentators in question are musicians like heavy metal pioneer Alice Cooper and party prince Andrew W.K., you know you’re in for something special. This is the premise of Noisey’s longstanding Back and Forth series, in which two artists come together for an unfiltered conversation. In this episode — one of two presented by HBO’s new show, Vinyl — W.K. gets the chance to speak with Cooper, one of his major musical influences and a fellow Michigan native.

The Great Lakes State serves as a fertile topic of conversation, with Cooper noting the abundance of rock acts who ascended into stardom in the late ‘60s and early ‘70s, including MC5, The Stooges, Ted Nugent, The Amboy Dukers, and Bob Seger.

“There were a bunch of bands that came out of Ann Arbor,” Cooper tells W.K. “That was the best rock scene, I think, in the world.”

Of course, one of the acts to emerge from Michigan at that time was Cooper himself. The original Alice Cooper band hit the mainstream in 1971 behind their single “I’m Eighteen”. The essential summer anthem “School’s Out” would come the following year, marking the beginning of a five-decade career for Cooper that still has no end in sight. The shock rock components of Cooper’s live show, including electric chair “executions,” fake blood, boa constrictors, and other macabre ephemera, clearly left an impression on W.K., whose own live performances are fiercely energetic and wild affairs.

Referring to the ‘70s as “a more innocent time,” Cooper confides in W.K. that being the best live band possible was more important than the records he put out. With full respect to both artists, this sentiment seems fitting. Both Cooper and W.K. have made their name in concert, although the deep pool of choice tracks that the two have to draw from certainly doesn’t hurt. While Cooper’s shows play up the idea of black humor and morbid imagery, W.K. embraces the other extreme, making each of his shows an attempt to throw the greatest party the world has ever seen.

While Cooper is hardly anyone’s definition of a reserved artist, the Back and Forth format provides the ideal platform for him to discuss one of the darker moments in the long course of his life as a rock star.

“Did you ever get to a point where you thought being alive wasn’t good?” asks W.K.

“I’ve never had a suicidal thought,” Cooper responds, “but I got to point where it was me, a big rock of cocaine, a pipe, and a gun. I was all by myself in a big Hollywood mansion, and everybody had left my life.”

Lucky for Cooper and his legion of fans, he made the unquestionably difficult choice to flush his drugs down the toilet, sleep for four days, and start over. As outsiders looking in, it can be hard to garner sympathy for the all-too-common stories of rock stars driven to excess, sometimes with lethal consequences. Hearing Cooper discuss his story with W.K., someone who knows firsthand the toll a rock-and-roll lifestyle can take, puts the matter into fresh perspective.

What W.K. and Cooper bond over most is of course heavy metal, the genre that unites them as musicians. In fact, it was Detroit-based CREEM magazine that coined the phrase “heavy metal” in a 1971 review of the band Sir Lord Baltimore. Cooper explains to W.K. that his band was “too weird for Los Angeles,” referring to the group as a “vaudeville freak show.” The comparison to vaudeville is prescient, because unlike most concert experiences, Cooper really does offer his fans a show when they see him live. It’s all part of what he sees as the ultimate purpose of heavy metal: to provide an acceptable outlet for youth to vent their frustrations with the world.

“Heavy metal is where you get to go and get angry and feel good about it afterward,” Cooper tells W.K.

The discourse between Cooper and W.K. is an important one, as discussion of the evolution of music from generation to generation only serves to benefit the medium. Tracing the roots of an act like Alice Cooper, who himself has cited The Yardbirds in several instances as his favorite band of all time, is a blueprint for future artists looking to make their own way in the fickle music industry. During a 2007 episode of his Nights with Alice Cooper radio show, Cooper said that many modern bands were inferior songwriters perhaps in part because they had “forgotten to listen to The Beatles.”

While Noisey’s Back and Forth series most likely doesn’t have the clearance to play any Beatles songs, they definitely have the power to bring insightful voices like Alice Cooper and Andrew W.K. together and give fans an extraordinary glimpse into what makes musicians tick.