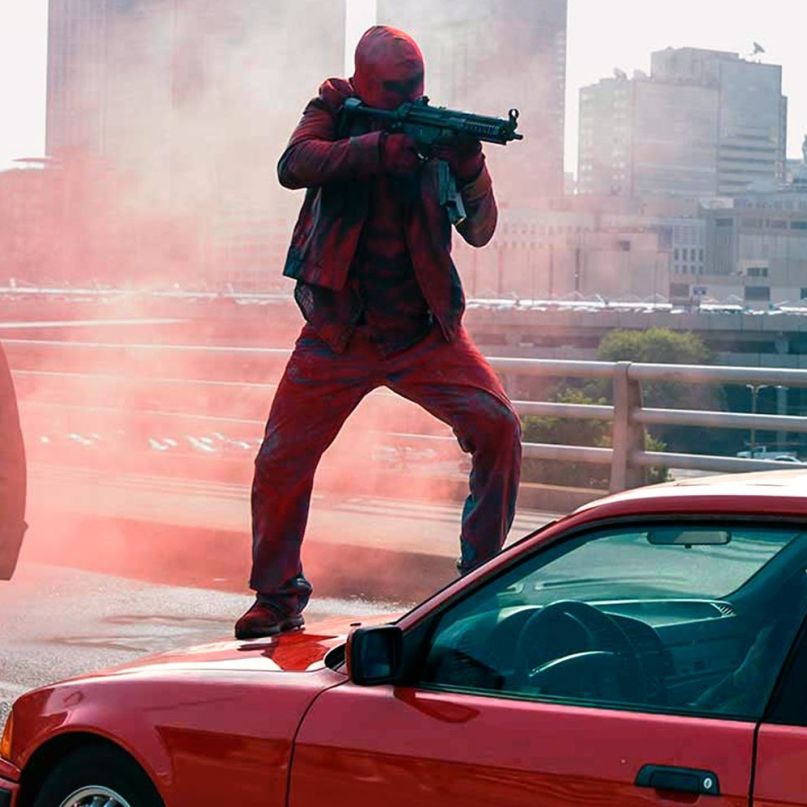 In a just a few short months, one will be able to go to YouTube and search “Woody Harrelson dog-faced saints,” or “Kate Winslet stupid sister,” or “total waste of Michael K. Williams.” When that day comes, it’ll be a great one. Nothing will be more beneficial for Triple 9 than the ability to not have to watch it all at once.

Sadly, that’s not yet possible, and those seeking a taut, expertly constructed crime thriller won’t find it in Triple 9. That’s not to say that John Hillcoat’s latest isn’t sometimes wildly entertaining. It’s a raucous ensemble-driven affair that, come to think of it, probably shouldn’t have the word ‘driven’ associated with it at all. Driving implies a sense that someone’s holding the wheel, whereas the magnificent cast—and they really are terrific—seems to be barreling down crowded streets with no interest at all in steering, like a drunk cop racing down an expressway or a thief whose getaway car is suddenly filled with a cloud of red paint. Triple 9 has plenty of things going for it, but it’s utterly devoid of control.

That’s a fitting complaint for a movie that centers on how quickly the best laid plans of mice and really dastardly men can go awry. The men in question, led by Michael Atwood (the always terrific Chiwetel Ejiofor), carry out a dazzlingly efficient bank robbery in the film’s earliest scenes. There’s the brilliant getaway driver/surveillance man (Norman Reedus), the menacing tough guy (Anthony Mackie and his cheekbones), another, more menacing tough guy (Clifton Collins Jr.), and the driver’s sweet-eyed, strung-out brother (Aaron Paul, basically playing Jesse Pinkman—not a complaint). It’s a hell of a heist, and a compelling opener in which the details do most of the work: puddles of urine appear beneath prone customers, they all speak Spanish or don’t speak at all, one of the men makes a woman with red lipstick kiss a bandana and then pockets it.

Of course, it doesn’t go off without a hitch, and the tension of that moment propels a significant part of the action moving forward. Collins and Mackie’s characters, both also cops, head off to work, where Mackie’s saddled unexpectedly with a new partner, “good cop” Chris Allen (a wooden Casey Affleck), who also happens to be the nephew of the detective investigating that first robbery (Woody Harrelson, having so much fun it’s almost indecent). As the cops go back to work, Atwood reports to his boss, Russian mafiosa Irina Vlaslov (Kate Winslet, perilously close to Bullwinkle territory), who tells him that one more job’s required before he gets his payment: he and his crew need to rob a Homeland Security facility for reasons having to do with her husband that remain, like a lot of the film, frustratingly unclear.

And that, at long last, is where we reach the titular numbers. In order to pull this off—and completion is not optional, as is made clear in one stunningly violent sequence—the men have to get as much cop-free time at the center as possible, and the best way to do that is to pull a “triple 9,” the code that signifies that an officer’s down. This, unfortunately, is where the predictable collides with the nonsensical in spectacularly disappointing fashion. Every twist is telegraphed so far in advance that the only elements of suspense are when, exactly, the “good cops” will figure shit out, and which person’s going to spout blood into the air next. Yet somehow, it’s still hard to follow. The passage of time seems unclear, but not in a way that feels deliberate; the film suggests that the relationships matter, but spends no time in developing them, so loyalties feel insignificant and betrayals don’t sting. And don’t even start to look for depth in the female characters—aside from Irina, to call them sketches would be far too generous.

So yes, there’s top-notch talent on hand, but the film is somehow even emptier than your average paint-by-numbers thriller. Hell, Speed had more characters worth caring about, and Speed’s anchored by Keanu Reeves, not a pack of actors whose collective Oscars, Emmys, Golden Globes, and critical acclaim could fill many a bank vault. Worse still, neither the film nor the actors seem to be able to decide what kind of movie they’re doing. Paul, Mackie, and Ejiofor are making a solid, gritty thriller, turning in nuanced performances that rise above the material. Winslet’s doing high Russian drag—seriously, the closest comparison to be made is to Ru Paul’s Drag Race alumna Katya Zamolodchikova, only Katya’s a bit more nuanced, and yes, that’s shade. Harrelson’s performance is both the most out there and the most entertaining, as he sends Detective Allen careening like a runaway stilt-walker from scene to scene. They are all good, all of them, but they’re not in the same movie. They’re barely on the same planet.

That’s the film’s problem, but also its saving grace—all those planets are awfully entertaining. Each has its share of visual and auditory delights, in which the details really dazzle, like those in that first robbery. But each is fleeting, like the hot pink dog that runs up to a completely misused Michael K. Williams (a trans role that could have been played by, say, an actual trans woman), or the terrifying moment in which both a character and the film go partially deaf. It’s great when a film leaves you wanting more, but not when you weren’t given much to begin with. At the end of the day, Triple 9 won’t bore you, that’s for sure. But neither will two hours of browsing YouTube. Perhaps it’s best to think of it like one long highlight reel, and just sit back and enjoy the muddled, messy ride.