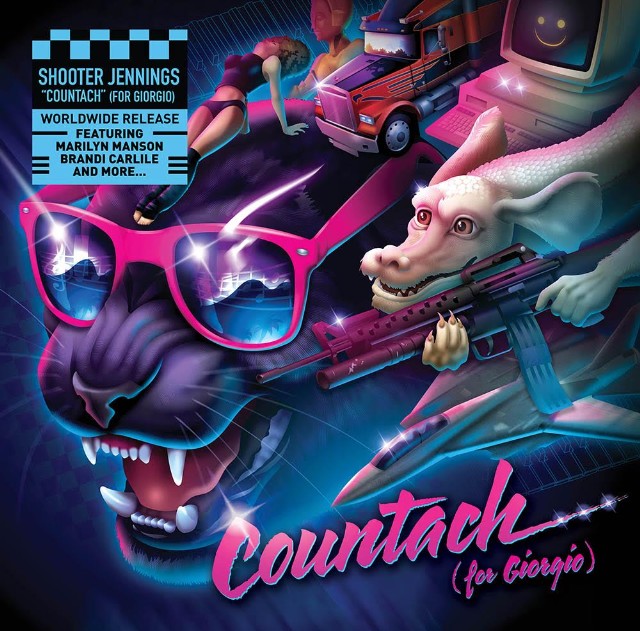 In the 1970s, the term “outlaw country” had a very specific definition, referring to country artists who ditched their clean-cut image in favor of a shaggier appearance, lyrics that flipped the bird at authority, and arrangements more influenced by the rawness of rock music than the lush arrangements of Nashville. But much like punk, the genre has become harder to define over the years. Lots of country singers have beards, a rebellious streak, and a rock sensibility. Does that mean they’re outlaw country? Not necessarily.

So what does outlaw country even mean anymore? If we’re adopting the vague, umbrella scope of modern punk, it could easily be defined as being true to yourself. And if we’re applying that criteria to Shooter Jennings, his seventh album, Countach (For Giorgio), is very much outlaw country — despite musically sounding nothing like the forefathers of the genre, or even the past work of Jennings himself.

As you can tell by the parenthetical of the title and the nostalgic album art, Countach is Jennings’ tribute to Girogio Moroder, the Italian producer who not only influenced the disco movement with his glitzy solo work, but defined an entire cinematic era with his contributions to Flashdance, Top Gun, The NeverEnding Story, and loads of other ’80s films. There’s a reason why Jennifer Beals, an F-14 Tomcat, Falkor the Luckdragon (with a machine gun!), and other celluloid imagery from the Reagan era all grace the cover. That’s a far cry from the Americana throwbacks seen on the fronts of Jennings’ earlier work like Electric Rodeo and his debut, Put the “O” Back In Country.

To further buck his more traditional influences, he opens the record by nodding to his late father, Waylon, whose song “Ladies Love Outlaws” became one of the core outlaw country jams back in 1972. Here, it’s his later hit, “Don’t You Think This Outlaw Bit’s Done Got Out of Hand”, that starts things off on “Loading”. For a while, everything seems normal: The older Jennings plucks away and sings in his lived-in twang as a blues scale builds around him. Then, about a minute or so in, the suicide doors of the title track open up to release a haze of Shooter’s synths, not in interruption, but in conjunction with “This Outlaw Bit”. It’s not a case of son rebelling against father — it’s a case of them working together, with Waylon’s song laying down the pacing and root chords before Shooter douses them in fragments from a shattered disco ball.

And that’s the general aesthetic of Countach. As Jennings explores Moroder’s catalog in a single radio broadcast (broken up by lines from films and trailer narration), fiddle plays alongside street-strutting guitars and four-on-the-floor percussion. Like Neil Young’s Trans, this contrast results in a more metallic, futuristic version of country, or — to flip the script — a more humanistic version of electronica. Where Moroder filtered his voice through cyborgian modulators on “From Here to Eternity” and “I’m Left You’re Right She’s Gone”, Jennings sings them in his natural tenor. Roots and robots rub up against each other again on “Born to Die” when septuagenrian country icon Steve Young (“Seven Bridges Road”) makes a guest appearance, then nearly gets overtaken by apocalyptic tunnel-wind. All of this could easily get messy, but because the album’s collage-style approach gets established early on, it all feels part of one singularly distant transmission.

Countach‘s two weak spots are actually songs that don’t depart far enough from the source material. All of the aforementioned tracks feel adventurous because Jennings makes the mechanized organic, but on his covers of “The NeverEnding Story” and “Cat People”, he keeps the human decidedly human, hiring vocalists who don’t do anything to separate themselves from the original singers. Brandi Carlile mimics Limahl and Beth Anderson by keeping things light and airy, and Marilyn Manson resigns himself to doing his best Bowie impression. The instrumentation stays more or less identical as well, favoring what sounds like a karaoke track over the weird metal-machine-country hybrid that Jenning develops elsewhere. While certainly not unlistenable or even unenjoyable, they’re also the only times Countach feels like a tribute instead of true innovation, the only times it doesn’t feel like outlaw country.