Plus, it turns out Kevin Smith and the fish from American Dad! had some lines, too 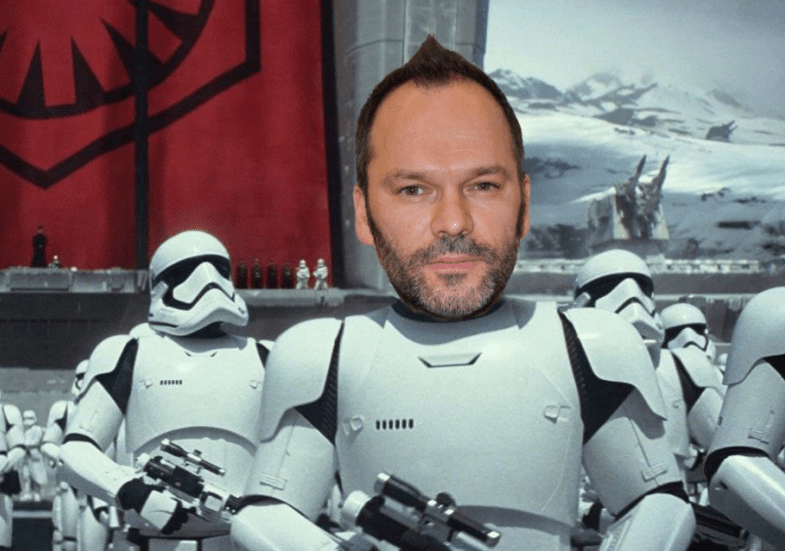 The credits of Star Wars: The Force Awakens revealed a lot of interesting cameos in the film. Bill Hader is credited as BB-8’s Voice Consultant, for instance, and even English producer Nigel Godrich has a role as Stormtrooper FN-9330. As it turns out, you not only see the unofficial sixth Radiohead member in the movie, but hear him too.

In a post on the official Star Wars website, supervising sound editor Matthew Wood revealed a complete list of who gave voice to all the movie’s anonymous background characters. According to Wood, Godrich in fact delivers one, powerful line: “Hey!” Spoiler: When Han Solo, Finn, and Chewbacca are entering Starkiller Base to rescue Rey, there’s a scene where an elevator door opens to show Chewie standing there. A Stormtrooper yells out in surprise, and that yell comes courtesy of Godrich himself.

In addition to divulging that voice actors like Fred Tatasciore (most of Marvel’s recent animated Hulk appearances, the latest Rocksteady from Teenage Mutant Ninja Turtles games and shows) and Dee Bradley Baker (Klaus the goldfish in American Dad!) also provide some lines, Woods said that famous geek writer/actor/director Kevin Smith has a speaking role in The Force Awakens. During a battle scene, a Stormtrooper sees some Resistance fighters flying in and yells, “We have incoming at 28.6! Move!” Well, that’d be Smith.

Back in December, it was revealed that James Bond actor Daniel Craig also plays a Stormtrooper, but his is a far more pivotal soldier. Craig is the Stormtrooper charged with guarding Rey while she’s held captive on Starkiller, a scene in which her force strength begins to show itself.