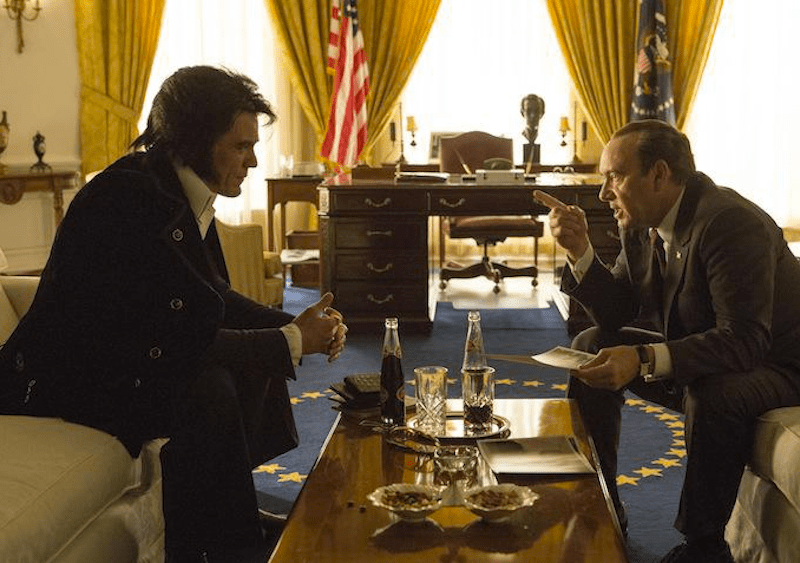 One day in the winter of 1970, Elvis Presley walked up to the gates of the White House and asked to meet President Richard Nixon with the hope of becoming a secret agent in the Bureau of Narcotics and Dangerous Drugs. True story. A photo of the two together has since gone on to become the single most requested image in the National Archives.

Now, the strange odyssey of that famous image is being told in Liza Johnson’s new film Elvis & Nixon. Starring Kevin Spacey as Nixon and Michael Shannon as Presley, the film is a humorous account of how the gun-loving, karate-kicking entertainment icon talked his way into the Oval Office and actually got his NDD badge. The movie also stars Sky Ferreira as the girlfriend of Elvis’ righthand man Jerry Schilling (Alex Pettyfer), along with Colin Hanks as chief Nixon aide Egil Koch, and Evan Peters as Deputy Chief of Staff Dwight Chapin.

For a sense of just how surreal this whole thing was, check out the first trailer for the film below.

Amazon Studios and Bleecker Street Pictures will release Elvis & Nixon in theaters this April. Read the official synopsis below.

“On the morning of December 21st 1970 the world’s biggest star, Elvis Presley (Michael Shannon) arrived on the White House lawn to request a meeting with the most powerful man in the world, President Richard Nixon (Kevin Spacey). Elvis & Nixon tells the astounding true story of this meeting between two men at the height of their powers.”