How The Revenant Became the Next Great Revenge Film 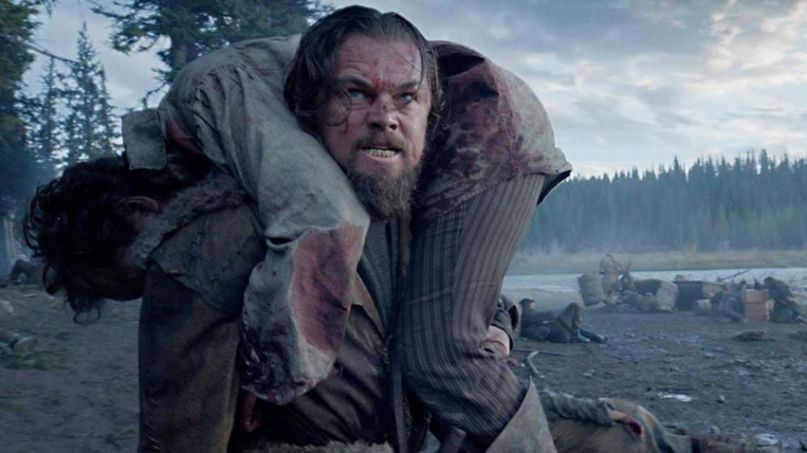 Page to Screen is a monthly column in which Matt Melis explores how either a classic or contemporary work of literature made the sometimes triumphant, often disastrous leap from prose to film. This time, he packs his moccasins and bear mace and sets out on a trail of early 19th century revenge.

Survival films and revenge films aren’t that different. Each genre sends protagonists off on soul-crushing, setback-laden journeys pitting them against seemingly insurmountable odds. Cinema also reminds us that the human drive to simply endure sits on par as motivation with the desire to see grave personal injustices avenged. It’s why, for example, we’re just as anxious to see Ridley Scott’s Mark Watney (The Martian) return home safely from Mars as we are to turn our thumbs downward as Scott’s Maximus (Gladiator) plunges a blade into the chest of the illegitimate emperor who ordered his wife and son’s murders. The real difference between genres, then, occurs right before the protagonist’s journey and at its conclusion. In the revenge genre, an act of treachery, rather than random misfortune, acts as the catalyst, and the quest concludes with a chilled dish rather than merely crossing a finish line intact. While these distinctions may be incredibly obvious, they are also the elements director Alejandro G. Iñárritu and screenwriter Mark L. Smith focused on to adapt a troublesome piece of historical fiction into the next great revenge film.

Michael Punke’s The Revenant features the unfortunate subtitle “A Novel of Revenge.” His fictionalized account of American fur trapper Hugh Glass’ encounter with a grizzly and subsequent pursuit of the two men who abandoned him in the wilderness begins to unravel when a half-scalped, broken-bodied Glass reaches trading outpost Fort Brazeau. At this point, the reader has followed Glass across hundreds of miles of merciless frontier, much of it traversed by crawling. Through unfathomable pain and suffering and with practically no supplies, he’s endured the elements, fended off beasts, and miraculously evaded hostile Indians. It’s one of American history’s most improbable survival stories. However, Glass has his sights set on a different finish line than the reader. While we’re relieved and satisfied that he’s made it to safety, he’s already got his eyes set on payback – a desire we never fully understand, and that’s a major problem in a revenge story.

No matter how many times Punke relates Glass’ thoughts of vengeance against John Fitzgerald and Jim Bridger — the men who were paid to remain with him until he died and give him a proper burial – the reader struggles to understand the precise nature of Glass’ rage given the perilous world the trappers inhabit. Glass himself pardons their desertion given the discovery of an Arikara war party near their camp. In the moment, he even questions whether or not he’d abandon them if their circumstances were reversed. What ultimately seems to feed his entire thirst for revenge is that Fitzgerald and Bridger take his prized Anstadt rifle and knife — Glass’ sole means of defense, even though the weapons would be useless should he face the entire Indian party. On the other hand, we can fully understand the terrifying position of the scumbag Fitzgerald and the boyish Bridger. Glass has been unconscious or delirious for days and unable to stand or speak. In their minds, they can either flee with whatever supplies they can salvage and possibly rendezvous with their trapping party, or they can remain with Glass, all but a corpse, and place their fates in the hands of mutilating savages. Punke has created a world in which self-preservation requires quick, calculated, and even, at times, ignoble decisions. While we may not admire Fitzgerald and Bridger’s flight, we can at least comprehend it.

In fairness to Punke, his novel takes what is historically agreed upon about Glass and admirably attempts to fill in the odd-shaped gaps between events and speculate about the mauled trapper’s motivations. The restraints he placed on himself when fictionalizing Glass’ story were far more restrictive than Smith’s, who describes his adaptation process as, “I kept the bear attack and names and just kind of winged it.” However, his “winging it” included crafting a story that would make audiences acknowledge that Glass has no alternative but to hunt down his betrayers. And that’s where Iñárritu and Smith’s version of the Hugh Glass legend succeeds over Punke’s. Never does the film’s pursuit of revenge seem anticlimactic — as it does in Punke’s novel — following Glass’ remarkable survival tale. In the film, Glass’ desire for revenge acts as an understandable, even relatable, driving force that justifies all he endures.

Punke’s Glass reads as a loner who feels drawn to the frontier. Yes, he’s lost both his parents and betrothed to illness while he’s been away — the earlier portion of that time involuntarily indentured in the service of famed pirate Jean Lafitte and the latter living among the Pawnee Indians; however, these deaths aren’t personal blows that drive Glass to the edges of the map as a fur trapper. As Punke writes, “Glass did not consider himself as someone with nothing to lose.” This marks a significant distinction from Iñárritu’s Glass (Leonardo DiCaprio). When discussing The Revenant, Iñárritu prefers to qualify his film as a love story rather than a tale of revenge. He means that his Glass is driven by the suffering of having lost all that he loves in this world. He can endure so much only because he has loved and lost to the utmost degree. When Glass’ superior, Captain Henry, asks him how he knows he’ll be able to find and punish Fitzgerald (Tom Hardy), DiCaprio’s laconic character responds, “Because he has everything to lose.” The implication, of course, is that Glass possesses the advantage of having nothing left to lose.

What exactly has Glass lost, though? After a pause, he tells the captain: “All I had was that boy … and he took him from me.” Yes, the film’s Glass, unlike the novel’s, has a son, the trapper’s only child with his long-ago murdered Pawnee wife. It’s a complete break from both Punke’s novel and historical fact, but it also makes Glass’ struggle and desire for revenge readily comprehensible to any audience. Similar to the aforementioned Gladiator, the words and images of Glass’ wife and son, Hawk, provide succor in his most dire moments — perhaps even guidance during his final act of retribution. Unlike Punke’s novel, with its revenge plot that hinges on frontiersman ethics in a life-threatening situation, we can fully understand the motivation behind a father avenging the murder of his son — the last remaining connection to his dead wife.

The comeuppance in a revenge film will never satisfy if the initial offense doesn’t enrage or unnerve the audience. Punke reveals Glass’ primary nemesis, Fitzgerald, to be a murderer, thief, liar, deadbeat, and deserter — and a man who contemplates snuffing out Glass at his weakest when Bridger isn’t around as a witness. However, his only offense in Glass’ eyes remains taking his rifle when he left him. Smith’s Fitzgerald commits a far more unforgivable act against a helpless Glass. Alone together, Fitzgerald urges Glass (body broken and strapped to a stretcher) to let him put him out of his misery. When Hawk finds Fitzgerald trying to murder his father and threatens to report him, the trapper buries a knife deep into the boy’s stomach. Glass, unable to move or speak, wails in agony and foams through clenched teeth as he watches his son stabbed a few feet from him and dragged off into the woods to his death. It’s difficult to imagine a more cruel offense — Glass forced to watch his son murdered, powerless to help him, and tortured further by not even being able to tell Bridger what happened afterward. And it achieves exactly what Iñárritu and Smith need it to: It leaves Glass no alternative but to hunt down Fitzgerald. Once he sets Hawk to rest, he immediately begins crawling after his prey.

Revenge stories need to end face to face. Maximus meets Commodus in the Colosseum, The Bride meets Bill with Samurai swords on his back patio (Kill Bill Vol. 2), and Punke’s Glass rather anticlimactically meets Fitzgerald in a courtroom on the charges of stolen property. Fitzgerald lies on the stand, Glass fires a shot into his shoulder, and the trapper listens to sage advice not to throw away his life seeking revenge. So ends Punke’s version. As a moviegoer, there’s no way around it: Fitzgerald should die. He’s attempted to kill Glass, murdered Hawk, deceived Bridger into leaving Glass for dead, robbed the fort, and killed and scalped Captain Henry. Tom Hardy has made us thoroughly hate Fitzgerald by the time DiCaprio meets him on a snowy river bank — and yet, part of us understands we’re not looking into the eyes of pure evil when we see Fitzgerald. He’s a hard, ignorant man, but he’s also a product of his environment, a survivor in a place where few survive — his scars from a partial scalping worn as proof. There are no courtrooms on Iñárritu’s frontier, and justice is determined by the last man clutching a knife.

That last man is Hugh Glass, and he faces a decision: to take his revenge or not. It’s a decision he’s earned, and we should know. Iñárritu has had us emotionally invested in Glass’ journey ever since he first crawled out of an open grave hundreds of miles ago. Now, as we watch Glass hold a blade to Fitzgerald’s throat and pause, we start to wonder just how much we really know about revenge films.