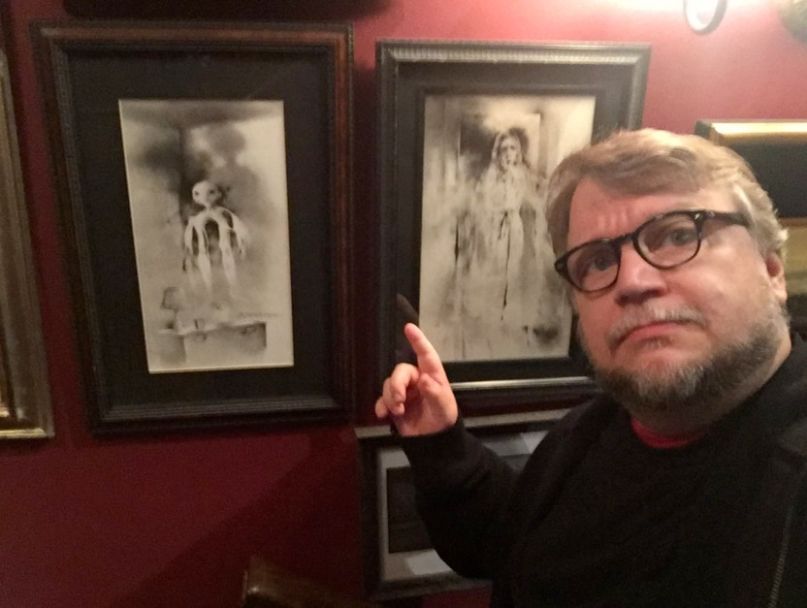 You might remember Scary Stories to Tell in the Dark from your childhood nightmares, in which case we have some good and bad news: Alvin Schwartz’s macabre children’s book anthology will soon be returning to haunt you as a feature film developed by Guillermo del Toro. The renowned director of Crimson Peak and Pan’s Labyrinth recently announced via Twitter that he will be working on the film adaptation of the book, which CBS Films purchased the rights to in 2013.

For del Toro, who is known as much for his surrealistic costumes and character designs as for his skills behind the camera, the main attraction appears to be Stephen Gammell’s horrific illustrations. Gammell’s original artwork is as essential to Scary Stories as the prose itself, and del Toro rightly describes it as “scary as fuck.”

I start development on a film based on a favorite book of youth: Scary Stories to Tell in the Dark! pic.twitter.com/yu31FkCz4K

Though it was replaced with slightly tamer art by Brett Helquist for the special 30th anniversary edition of the books, Gammell’s artwork will factor heavily into the upcoming film’s aesthetic. Screenwriter John August (Big Fish, Charlie and the Chocolate Factory) penned the current draft, and he told Crave in November that “the illustrations are an incredibly crucial part of the book, and they are an incredibly crucial part of the movie. The difference between those original illustrations and the second set of illustrations are an important aspect of the movie experience.”

Though it hasn’t yet been confirmed that he will direct, del Toro will at least be a producer for Scary Stories to Tell in the Dark. He’ll be joined in that role by Sean Daniel and Jason Brown of Sean Daniel Company and Elizabeth Grave of 1212 Entertainment.

Update – Thursday, February 25th at 1:45 p.m. CT: Dan and Kevin Hageman (The LEGO Movie) have been hired to polish the film’s script, according to Variety.