A redemptive effort from the latest iteration of Dave Mustaine's band 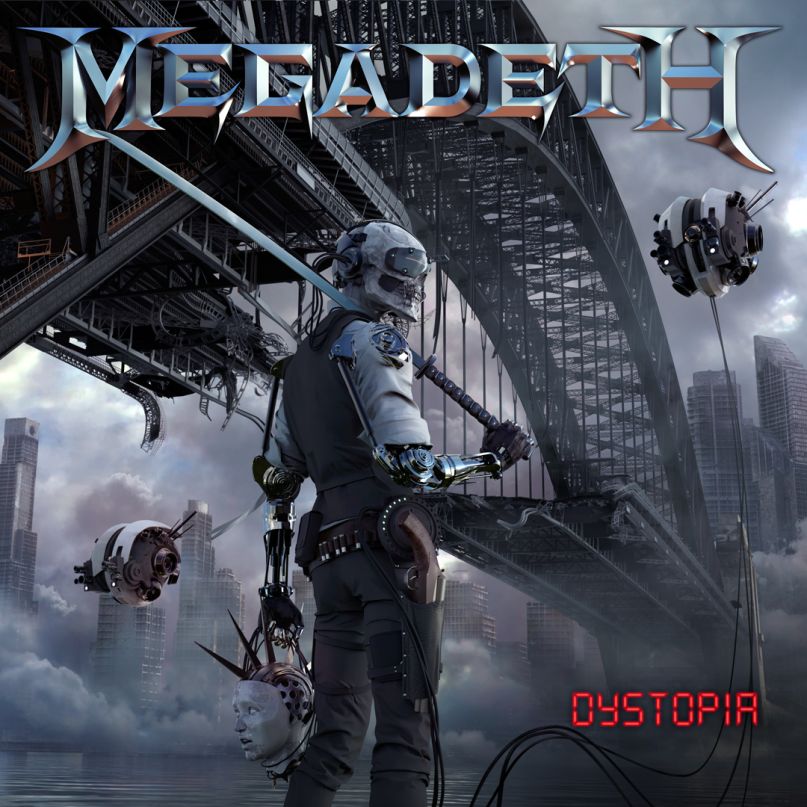 Megadeth is Dave Mustaine, and Dave Mustaine is Megadeth. He’s a one-man thrash metal force, and Megadeth has always been dominated by his all-consuming ego. It’s that same ego that got him kicked out of Metallica in ’83 and has made it impossible for him to hold down a steady lineup in Megadeth. With each album, Mustaine seemingly goes through a new drummer and lead guitarist — his off-and-on collaborative relationship with bassist Dave Ellefson being the only consistency over 30-plus years and 15 albums. Band chemistry has never been a priority, and the upheaval has made for a patchy string of releases, with 1994’s Youthanasia being the last top-to-bottom consistent release in the Megadeth discography and 2013’s lifeless Super Collider among the worst.

Fortunate, then, that Mustaine decided to dispel the Super Collider lineup — like the GM of a sports franchise swapping personnel — adding Lamb of God’s Chris Adler on drums and Angra virtuoso Kiko Loureiro on lead guitar for Dystopia. It’s a noticeably heavier, more aggressive recording, with Adler’s ferocious kick-drum assaults matching Mustaine’s riffs (no easy task), which are as manic and frenzied as anything he’s written since Countdown to Extinction. Opener “The Threat Is Real” fires off with the punkish tempo and violent tonalities of vintage Megadeth, immediately quelling any fears of this being another Super Collider. The production (handled entirely by Mustaine) and mastering are rich without being overly compressed, a rarity for modern, mainstream metal albums. Mustaine also experiments with arrangements more than he has in recent years. The prog changeups of “Poisonous Shadows”, hardcore asides (“Foreign Policy”), and occasional acoustic interludes are the splashes of color that his music has been missing. Megadeth haven’t sounded this good in years.

Vocally, Mustaine has settled into a comfortable, husky growl, growing into his aging voice instead of trying to impersonate the nasally screams of his youth. As usual, his lyrics form a loose concept album of post-capitalist suspicions, X-Files conspiracies, and pseudo-Libertarian rhetoric. Mustaine has never shied away from sharing his questionable politics in the media, and the idea he might use a politically themed album like Dystopia as a soapbox was frightening. Instead, he leaves his phrases just metaphoric and cryptic enough as to not let too much of his personal beliefs seep directly into the lyrics, and we’re left with the simple rhymes and objectively playful anti-establishment lyrics that have defined thrash metal and Megadeth for decades. “See the burnished images of a crestfallen agency/ Violent conditioning caused the nature of the enemy,” he snarls on “Threat”.

Dystopia is not without its duds, however. “Bullet to the Brain”, “Lying in State”, and “The Emperor” fall into static riff-verse-chorus-solo territory and lack memorable hooks; though not necessarily off-putting, they pass in a thrashy blur. Loureiro’s solos also leave much to be desired. Although highly gifted and technically pristine, his perfect ascending-descending scale work and fancy flourishes come off as robotic. With the ripping instrumental “Conquer or Die!” as an exception, his guitar work is cold, calculated, and emotionless — Dystopia’s biggest drawback. Unlike Marty Friedman, whose spotless classical style also verged on vapid, Loureiro doesn’t have the compositions (on Dystopia, at least) to compensate for the synthetic cleanliness of his playing. Mustaine’s always passed off lead duties, but he’s a gifted soloist in his own right, and it’d be interesting to hear these solos as interpreted through his more erratic style.

While it’s not on the same tier as the band’s classic material, Dystopia feels like a Megadeth album and is worthy of bearing the name — something that can’t be said for Super Collider and TH1RT3EN. It’s political without being overt, the production is strikingly heavy, and the good tracks outweigh the bad. At this point in his career, it’s as strong an album as anyone can expect from Mustaine and his revolving door of performers and should pull Megadeth out of has-been status.

Essential Tracks: “The Threat Is Real”