Reunion of the Year: Sleater-Kinney

Sleater-Kinney is that rare band that comes back stronger 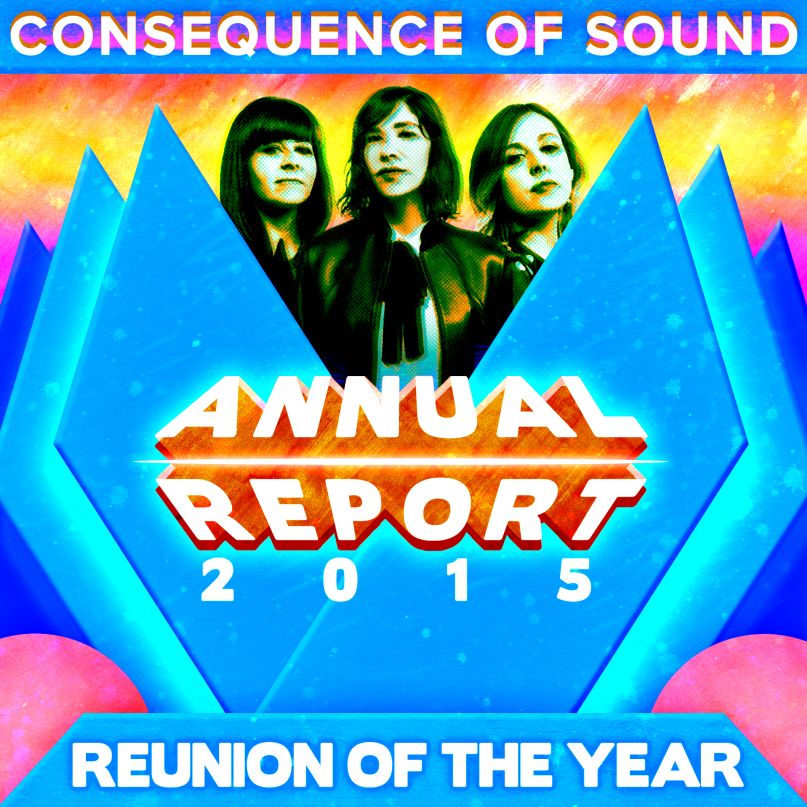 When Corin Tucker, Carrie Brownstein, and Janet Weiss got back together a year ago, they weren’t just reuniting with each other. They were reuniting with everyone who had ever looked to Sleater-Kinney as a reprieve from rock music’s status quo.

Announced via a surprise 7-inch of “Bury Our Friends” slipped into the band’s vinyl box set, Sleater-Kinney’s eighth album, No Cities to Love, marked both a return to and a revision of form. Brownstein and Tucker’s twin guitars snaked around each other as wiry as always, and their vocal lines were more concerned with cutting sharp corners than tracing perfect circles, but suddenly they were 20 years removed from the fighting spirit they’d sparked up in the ‘90s. Suddenly everyone in Sleater-Kinney had whole adult lives to reckon with.

“Honestly, we didn’t really know what was going to happen,” says Tucker, speaking on the phone from Portland where she’s enjoying some time off between tours. “There wasn’t a test-case scenario for a band that hasn’t been a band for 10 years and puts out a new record. We just had to take a leap of faith that what we were doing would matter to our fans and translate to people. We took the time to write a record that brought us into the present and reinvented the band. I think we invested ourselves wholly in that experience. We just trusted that what was meant to happen would happen.”

What happened was a year of live shows around the world, including a headlining set at Chicago’s Pitchfork Music Festival and a chain of sold-out dates across North America in the first few months of 2015. Sleater-Kinney, whose harrowing early tours are detailed in Brownstein’s new memoir, Hunger Makes Me a Modern Girl, played under gleaming professional lights to eager crowds of thousands.

“It’s just been so fun,” says Tucker. “Each show has been a total party of reuniting with some of our old friends and fans and then also making new fans and friends. It’s been so much more rewarding and more fun than I even dared to hope for.”

No Cities to Love touches on the experience of holding onto your rebellious spirit as you leave your 20s behind — of finding new ways of striking out once you’ve realized that your songs alone can’t save the world. Its songs gather sentiments of togetherness in spite of mounting alienation and ennui; some, like “Surface Envy”, detail anxieties about getting the band back together in the first place. Tucker wrote out her doubts, and the resulting music put them to rest. She got to lay her worries bare in front of thousands of people who could find solace in them. “People bring their own struggles and their own anxieties and their own things that they’re dealing with to that song,” she says of “Surface Envy”. “To be able to translate that and have other people find strength from that song, it does change the meaning of it. It makes it a deeper, a bigger, a wider song.”

Tucker marks headlining Pitchfork as a high point of her year, a moment where Sleater-Kinney’s songs reached one of their biggest audiences to date, but she was mostly eager to see what the next generation of musicians was up to. “I felt like these were my people,” she says. “It was the perfect festival.” She name-checks Courtney Barnett and Shamir as two new favorites; she also points out that the music world Sleater-Kinney was calling for in the ‘90s is starting to be realized in the 21st century. “There were lots of women playing the festival. It was like, fuck yeah! This is always what I’ve wanted from the music community. It’s what we were complaining about in our music in the ’90s. To be able to come back 20 years later and to have it be more diverse and more progressive and more thoughtful — I was like, this is so awesome.”

Though Tucker and her bandmates have grown as people and musicians since they first started carving out their corner of the underground, she credits their longevity to an inexhaustible rapport among the three of them. “Some of it is just pure, raw chemistry between Janet and Carrie and I. That really is the basis of the band, and we wouldn’t be the band we are without that,” she says. “That, to me, is the core of what we do. But I think that being able to come back to the band after not having done it, we’re more grateful. We’re not burned out on it. We’re not in our 20s and living in a van together. It’s actually more fun, in a way, because we get to come back to doing it and really appreciate that collaboration.”

You don’t often see reunions that work at more than lip service to a band’s glory days, but Sleater-Kinney might be one of those rare bands that comes back stronger after spending time apart. Speaking to Tucker, you get the sense that no one in the band would circle back to it unless it meant as much to them as it did the first time around. It has to be alive, it has to be present, or the band falls apart.

Though the band has picked up plenty of new fans with 2015’s album and tour, some of Tucker’s most moving stories center on the fans that have stuck with Sleater-Kinney through the dips and turns of their own lives. “The stories I could tell you, you wouldn’t even believe,” she says. “There was a young mother who was pregnant when we put out All Hands on the Bad One. We signed her 7-inch to her baby, who was called Peanut at the time. She brought her daughter to our record signing in LA. She brought Peanut. We got to meet a person who’s now 15 years old and grew up listening to Sleater-Kinney.

“It’s so incredibly emotional that people have such a connection to this band,” Tucker continues. “They want to see us and they want to tell us their story and connect with us, and they feel a part of our music and our stories. It’s a deeply passionate journey that we’ve been on. I’m just so happy to be able to reunite with people.”