Reel Estate: The Year the Mortgage Crisis Went to the Movies 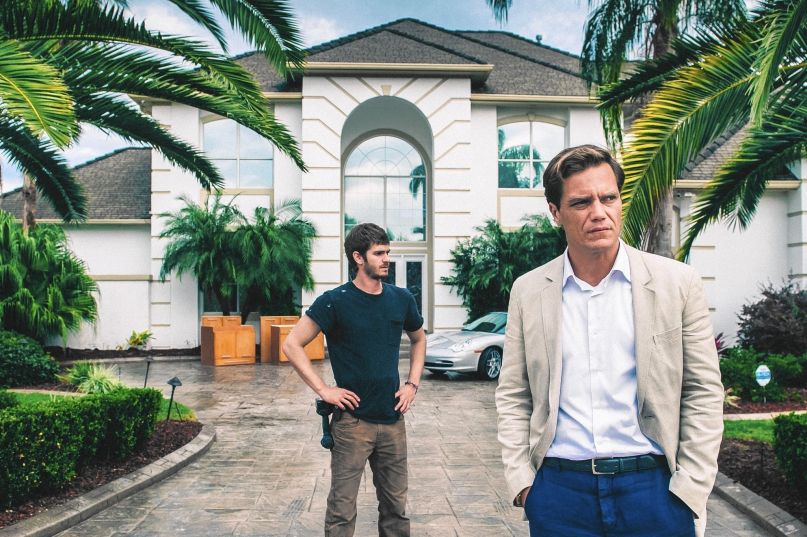 The real estate film. Never really heard that label, right? Maybe you’ve seen films with stories of homes, but outside of like, Wall Street films, house comedies, or documentaries about the modern recession? 99 Homes and The Big Short are defining films in 2015: works of distinct qualities and a feverish concern for the American people by way of the housing market.

We now have two accessible films practically begging audiences to give a damn about real estate. Films that need to be studied for their formal and textual content. Films with humane, economical interests that dug deep into the mid-2000s and produced art concerned with the latest, most serious aspect of everyday life. Think of the social-political films of the ‘60s that were responses to the changing weather of politics around the world, or maybe the revisionist Westerns of the ’50s in a post-war America. The real estate film is just that: real, and for the mid-aughts.

This year partied like it was 2009, as 99 Homes and the soon-to-open The Big Short stepped up to the podium. Both have a lot of valuable things to say, and each came with its own language and characteristics. These two films are concerned with real estate, finance, economics, anger, realism, and mortgages, but best of all, they aren’t a headache.

However, were we so blindsided by the mortgage crisis that we’re only making movies about it now?

It’s easy to distract oneself from the subprime mortgage crisis of the late aughts. It’s all so convoluted. “Well, the economy, and that recession goin’ on, um, bailouts…” someone like me (a person with embarrassingly low grades in high school economics) might say, trailing off praying for a change of subject. Adjustable rate mortgages? MLS listing systems? CDOs? MBS? The banks did what? How much is a hot tub addition?

The fact is it was all too much. The financial crisis, the recession, the subprime mortgage crisis, they’re all connected and yet not the same. But once the real estate bubble burst, the mess was overwhelming, and it feels like the national strategy was to move forward quickly instead of learning from mistakes. Sure, the economy is seemingly okay, but did you know that banks are still providing packages eerily similar to the CDOs (collateralized debt obligations; Google them), those things that partially led us into the mess in the first place, through newly designed instruments and names?

The bubble caused a snowball effect that affected everybody, as bank money propped up against bad loans and wasteful development work dried up. If one can’t get paid, one can’t work, and one then can’t afford to stay in their home. This was a mass occurrence. As for learning about that struggle, well, how have movies depicted and delineated the business of real estate? How many real estate movies are there?

We’ve got years of swinging-dick morality plays (albeit outstanding ones like Glengarry Glen Ross, The Wolf of Wall Street, and, heh, Wall Street) and stories about the perils of home and garden (The Money Pit, Life as a House, House of Sand and Fog, and Step Brothers curiously enough). The housing market has never received direct dramatization onscreen.

Real estate cinema has mostly been a series of half-thoughts on big business, comic woes about flimsy shacks, or just symbolic metaphors based on home ownership. Life as a House was less about the home maintenance than it was about a dying man. The Money Pit’s all about sight gags in Tom Hanks and Shelley Long’s ramshackle abode. Glengarry Glen Ross? Fragile ego. And that’s Jim Dandy. Who in their right mind wants a two-hour film about a house closing and sweaty signatures in real-time? Keeping that in mind, real estate has its own set of characteristics in popular films.

There’s never been a lack of cartoonish villains in such films. Fat cats. Wall Street schmucks. Lousy landlords. Unscrupulous agents. Or scam artists trying to get rid of dud properties. These are the people trying to sell you a home with the intention of screwing you over. You’d need 10 hands to count the number of shady real estate deal plotlines you’ve probably unwittingly seen in comedies and lesser dramas; It’s a Wonderful Life, The Cocoanuts, Beetlejuice, and You Don’t Mess with the Zohan come to mind quickly.

Also, real estate is often tenuously related to films about general finance and the stock market. At one point in The Big Short, Ryan Gosling’s Jared Vennett, a trader with Deutsche Bank, mocks the audience for having stock buzzword commentary on big issues when pressed with actual discussion about them. Where do you go to be tricked into an econ lesson by handsome stars?

There have been a few attempts so far to cinematically address the real estate crisis. A few years ago, J.C. Chandor’s Margin Call addressed the financial crisis of the late 2000s with cold, clinical accuracy. While it garnered a deserved Oscar nomination for the original screenplay, Margin Call was admittedly a little too uptight to catch on with audiences. Alex Gibney’s Enron: The Smartest Guys in the Room and Charles Ferguson’s Inside Job look at the big picture of the crisis, but real estate is secondary.

Now the real estate film, proper, has arrived. 99 Homes and The Big Short manage to take the ego, confusion, and money of matters and divide the bubble and crisis into compelling stories, with their own clichés and consistencies.

These films are sympathetic to their core despite their blanket outrage. They are about disbelief and bewilderment, about the American public getting ripped off in a big way without truly knowing how or why. Bankers are the newest Snidely Whiplashes. They have a thing for reflective, self-aware harangues about “winners” and the value of a man being measurable by pay and amenities. They are rooted in varying degrees of realism by directly using real estate as history, narrative, and meditative angst.

The housing market is a battlefield — full of metaphors for loss and exploitation. And the heroes are those willing to take the time to read the fine print and realize that things have a way of getting incredibly fishy in the world of real estate when the paperwork’s “adjustable.” The US is full of people either trying to get by or live beyond their means, enabled by desperate systems. All these features and more are the characteristics of The Big Short and 99 Homes’ real estate genre works. But each film operates in unique ways.

The Big Short is the how and why — a reflective rant on the days before and during the bubble and crisis. It’s a livid lecture, with Seth MacFarlane-esque comic asides and fourth-wall breaking hawing about the different mortgages that were long considered the bedrock of the American economy and how they eventually rippled into a global nightmare. The film’s a gamble, but director Adam McKay (Anchorman) provides blood-pressure-raising diatribes from main characters about greed, fraud, and the large-scale unwillingness to blame, let alone understand who to blame, in that situation. Multiple loans and payments and enticing offers from banks created means for investors to maintain a bottom line on paper that no human could ever keep on the up and up.

Meanwhile, Ramin Bahrani took a more documentarian approach to the mortgage crisis in 99 Homes. The film looks closely at the people affected and forced to leave their homes. The movie’s a painful situation, dramatized in plain terms. We see Andrew Garfield’s Dennis Nash, a hungry, single dad, become an eviction man as he diminishes people at their lowest, and more importantly, we actually see how people were legally demeaned and left homeless by the crisis. Families, old couples on fixed incomes, people of every class and income, it doesn’t matter. In 99 Homes, nobody is safe from the chop of bank-enforced eviction.

The real estate film, like the post-9/11 films of the early to mid-2000s, is the new social crisis film in American cinema. 99 Homes and The Big Short should be considered benchmarks — beginnings of a genre. And it’s not just about movies with deserted subdivisions in Dade County. These are real estate and housing market films, predicated on a very recent and now more easily understandable bit of watershed. Keep an eye out for that small text, never sign until you’re absolutely certain, and be ready to navigate the maze of trying to own a little bit of land in a nation of adjustable rate mortgages. It’s not unfathomable that we’ll see movies about unscrupulous, Machiavellian bankers in the near future played like new bacchanal.

The real estate film might bring us hard, scary movies about the surprise terror of losing a home even when everything seems rock solid, on paper at least. We might see stars like George Clooney testify in congress against white-collar bank heads in a big-budget Oscar-bait movie, or young filmmakers look at the micro-economics of struggling to find a place to stay when the economy was on such rocky ground. 99 Homes and The Big Short are the exemplars, and now that the writing’s on the wall, it’s only a matter of speculation and betting for how the genre will develop.