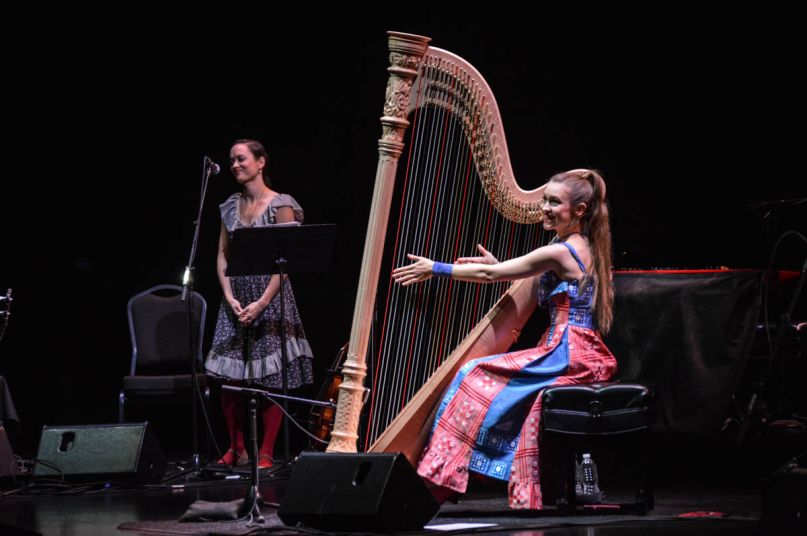 Joanna Newsom presents one of the only circumstances in which hearing a dude cry “fuck yeah!” during a harp solo doesn’t feel wildly out of place. As such, perhaps the biggest takeaway from watching her play last night was the complete physicality and total bad-assery that the 33-year-old brings to sitting at a giant, antiquated instrument (which she’s now been doing for audiences for more than a decade). A friend of mine described how squeaky his chair became as he “head-banged” to the musician’s harp solo during “Peach, Plum, Pear”, and I told him how I couldn’t keep still during Divers’ most rock ‘n’ roll track, “Leaving the City”. What this woman was doing with a harp blew me away more than anything I’ve seen a man do with a guitar lately.

The last time Newsom played Chicago, it was 2013 in the heavy heat of Pitchfork Music Festival at the onset of dusk. To say her expectedly incredible performance held the audience’s attention would be a vast understatement, as there has perhaps never been a more attentive festival crowd, but something about her ornate golden harp juxtaposed against a flapping black tarp at a festival felt ill-matched. To see her last night at the Chicago Theatre — an astounding French Baroque structure built in 1921 with an exterior that recalls the likes of the Arc de Triumph and an interior echoing Versailles — made for an incredible marriage of aesthetics and acoustics.

This beautiful synthesis for the eyes and ears overshadowed the fact that, though I can’t speak for the balcony, empty swaths of seats on the floor led me to wonder if the show would’ve swiftly sold out the 2,500-person Riviera Theatre on the north side of town instead (the Chicago Theatre holds about 3,800). But what the audience lacked in size, it made up for in total adoration and complete concentration (save, perhaps, for one attendee who felt compelled to ring what Newsom called a “very judicious” bicycle bell between songs).

Even the most sagacious music critics and listeners have trouble unpacking the meticulous layers in Newsom’s music. In concert, the broad instrumental palette behind Divers came to life, though in a reasonably pared-down manner, with opener and frequent collaborator Ryan Francesconi handling guitars and a myriad of other instruments, Mirabai Peart on strings and singing backup, and Newsom’s brother Pete behind the drum kit. Francesconi also opened the show with Alela Diane, offering up such a warm and soaring performance that I, a Fleet Foxes-obsessive, temporarily forgot that Robin Pecknold is set to slide into that role next year.

Newsom’s catalog is sprawling, idiosyncratic, and critically acclaimed, but nothing quite proves just quite how avant-garde and wholly unique she is than watching her perform live. Her ability to transcend genres came to life last night as she bounced between the harp, grand piano, and keys. Call it indie rock, jazz, folk, baroque pop, or some type of amalgamation of these labels — you still can’t pinpoint exactly what’s happening, but you know it’s unlike anything else out there right now. With every song, album, and performance, Newsom quiets those who reduce her to characterizations like “woodland nymph” or “elfin princess” and encourages observers to throw around a more fitting label: genius.