Learning to Fly Again with Eagles of Death Metal

In the wake of tragedy, a rock band showed us how to carry on 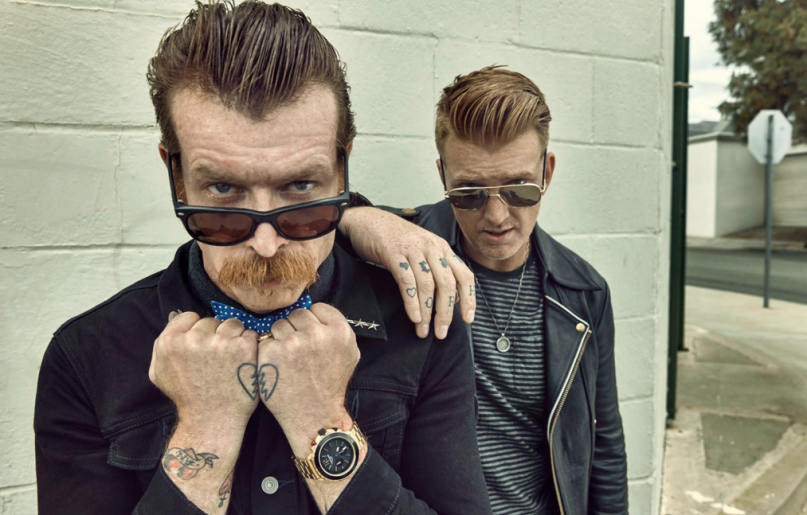 Music, Movies & Moods is a monthly free-form column in which Matt Melis explores the cracks between where art and daily life meet.

These dwindling days of December are imbued with a certain crystalline stillness – a reflective pause between waning celebrations and impending resolutions. As I sit in an empty, rose-brick colonial just north of Pittsburgh, rain spats against tall gliding-door windows, and a gentle wind coaxes the chimes outside. It’s almost too serene a setting to attempt to put a button on a frenetic 2015. Initially, I sat down to recap a year that witnessed women kicking ass across mediums: Sleater-Kinney returning in all their fury and bluster; Charlize Theron leading a full-throttle escape across a post-apocalyptic wasteland; and Daisy Ridley piloting the Millennium Falcon through a galaxy far, far away. But that’ll have to wait for another column. Sadly, what stands out most about 2015 was how real-life violence, tragedy, and fear overshadowed so much of this year’s action onstage and onscreen.

It may sound hyperbolic to suggest that 2015 was the year that fear became a regular presence at concert venues and movie theaters, but the threat or nightmarish reality of a normal outing turning perilous has been an undeniable narrative. At this time last year, cyber terrorists — confirmed to be sponsored by Pyongyang — used threats of violence on par with 9/11 to effectively cancel the premiere and theatrical release of the Kim Jong-un-lampooning comedy The Interview. Our journalist comrades at the French satirical weekly Charlie Hebdo endured a terrorist attack shortly after the new year rang in. As victims’ friends and families awaited the court-levied fate of Aurora, Colorado, theater shooter James Holmes this summer, additional theater attacks took place in Louisiana and Tennessee, prompting further scrutiny over security at the movies. And as recently as Christmas night, four teens were shot just outside a theater in Mobile, Alabama.

And then there was Paris.

Coverage of the wave of terrorism that struck the French capital on the evening of November 13th — a coordinated series of suicide bombings and mass shootings that murdered 130 civilians — quickly became all-consuming. Not since 9/11 do I remember losing an entire night’s sleep to a breaking news story, as onsite reports, maps of Paris, and grim speculation acted as placeholders while the tragedy played out in real time. The attacks unexpectedly fell under Consequence of Sound’s scope when it was reported that shootings had occurred and hostages had been taken at an Eagles of Death Metal (EODM) concert at the Bataclan theatre. Never do heinous acts like the ones that took the lives of 89 at the show that night (including the band’s merchandise manager, Nick Alexander) not resonate, but this tragedy struck a particularly frightening and near-to-heart chord. We’ve interviewed members of the band a number of times, and those concertgoers — maybe even occasional readers of our site — were simply out on a Friday night doing what any of us music lovers might be when, as EODM drummer Julian Dorio described it, “absolute and unnecessary evil turned our world on its head.”

A little more than a week after the attacks, members of EODM and crew sat down for an interview with Vice founder Shane Smith. It’s one of the most difficult-to-watch band interviews you’ll ever see. Each member — clearly still trying to process the experience — calmly details the unspeakable chaos and carnage that engulfed them that night. Their descriptions sound nothing like a concert but rather like a shooter video game from the perspective of those without guns. The room is still, the air heavy. Co-founder and frontman Jesse Hughes’ head hangs low as he listens, his trademark suspenders, along with the arms of his bandmates, seem to be holding the man himself together. “It’s okay that there aren’t words,” comments co-founder Josh Homme, who wasn’t drumming for the band that night. “Maybe there shouldn’t be.”

If that’s all Smith’s interview captured — a chance for the band to speak, for their story to be told, for the story of those no longer alive to be told, even in part — that would be understandable and more than enough. But the entire band, especially Hughes, had another urgent message to get across. “I cannot wait to get back to Paris,” erupts Hughes, no longer fumbling for words. “I cannot wait to play. I want to come back. I want to be the first band to play the Bataclan when it opens back up.” It’s a mission that probably runs counterintuitive for many of us: stepping back into the setting where our worst nightmares came to life. But seeing Hughes break down when talking about the heroism that arose that night — of people, including Alexander, refusing to leave friends and shielding each other — makes his eagerness to return understandable, almost feeling obligatory. “Our friends went there to see rock and roll and died,” Hughes asserts. “I’m gonna go back there and live.”

Nothing Hughes or the band said in that interview has been mere lip service. They have returned to Paris to join U2 onstage and visited the memorial outside the Bataclan. Hughes’ promise to finish the band’s set will be kept in February when EODM play Paris as part of their rescheduled European tour. And maybe most movingly of all, the band have encouraged other artists to cover their song “I Love You All the Time”, with all the publishing royalties being donated to help the families of the victims. So far, acts including My Morning Jacket, Savages, The Dean Ween Group, Florence and the Machine, Kings of Leon, and Jimmy Eat World have contributed to this Play It Forward campaign. It’s a credit to Parisians, the band, their fans, and the global rock and roll community that a story beginning in pointless tragedy can, if nothing else, encourage people across the world to unite under a banner of human solidarity and maybe even raise the devil horns together.

Events like the Paris attacks and theater shootings linger in the back of the mind. A couple weeks ago while attending a sold-out Force Awakens premiere with friends, part of me was praying that nothing terrible would occur at our viewing or at any of the other countless mobbed screenings across the country. Fear and disgust can almost be enough to keep us at home, but the Eagles of Death Metal reminded us in 2015 why it’s so crucial that we keeping going out and doing the things we love. It’s not that seeing a movie or moshing at a concert is more important than life — it’s that these acts are an inextricable part of our lives. “We don’t really have a choice,” Josh Homme explained. “This is our way of life — it’s the human condition.”

I like to think that a night where darkness overtook the City of Light also stoked something inextinguishable in all of us.