How Parenthetical Girls Took Back Christmas 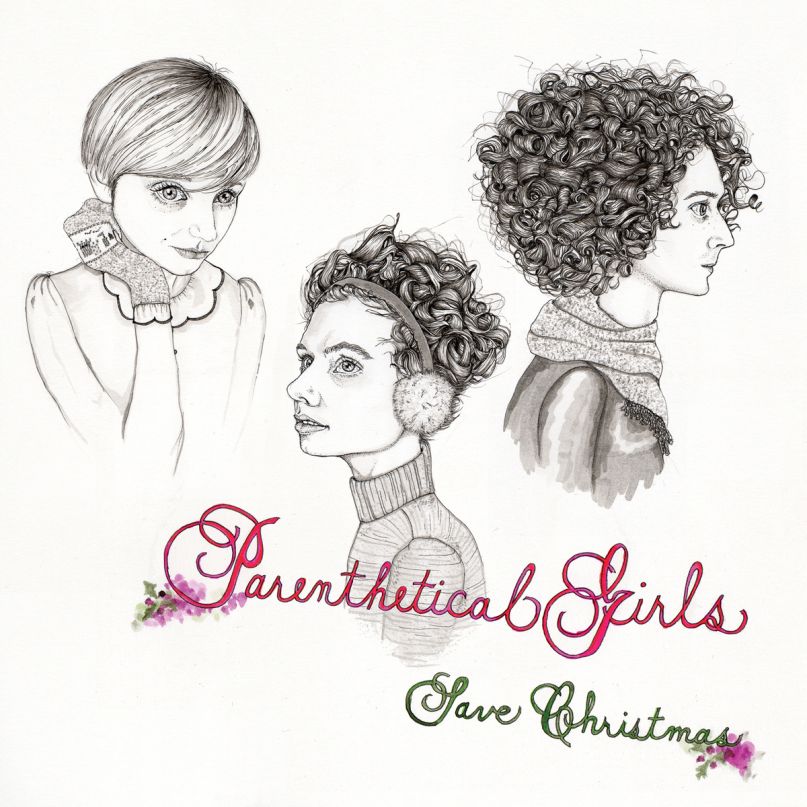 There’s something magical about the music of Parenthetical Girls. I use “magical” here to mean transportive, evocative of another world, be that a hazy memory or an imagined warmth. The experimental pop band’s music, from their earliest lo-fi recordings to their sumptuous 2013 swan song, Privilege, is emotive, openhearted melodrama that, despite taboo lyrical subjects and a dash of malevolence, frequently comes bundled in a shroud of soul-warming melodies you’ll know without knowing you know them. Van Dyke Parks, Phil Spector, and The Ronettes are as much influences on Parenthetical Girls as Xiu Xiu and Morrissey, so it almost feels like a foregone conclusion that, in this jaded modern age, the band should have a deep back catalog of original Christmas songs.

“All of our Christmas songs make me cringe a bit,” Zac Pennington, the band’s Alpha and Omega, tells me over email. I’m not shocked. Anyone who saw the band live, especially during their last few tours, had a solid chance of glimpsing Pennington’s penchant for gentle self-deprecation. But Christmas is a tender subject for him, too. And, on these two-dozen or so songs, Pennington both reveres and resents the season in ways that are exceedingly vulnerable.

“I find Christmas super confusing as an adult human. [It’s] really the only place in my life I let nostalgia creep into,” he says. “I’ve had nostalgia pangs for the holiday season since I was pretty young. I was a pretty melancholy kid.” It was in the small Pacific Northwest city of Everett where a pint-sized Pennington once waited for Santa. Against the “heroic alcoholism” of his extended family, he and his clan would enjoy group readings of The Night Before Christmas, a tradition he’s since replaced with annual viewings of It’s a Wonderful Life. “It’s my favorite movie,” he says. “It’s like the ‘Born in the USA’ of Christmas movies: the story of a good man’s slow, tempered descent into suicidal despair that’s pretty much universally interpreted as a saccharine Christmas miracle.”

It’s a dichotomy that’s familiar to his Christmas music, which often explores loneliness and existential angst against twinkling sleigh bells and spritely strings. His first release under the short-lived name Swastika Girls (a reference to Brian Eno and Robert Fripp’s 1973 ambient release No Pussyfooting) was entitled Christmas with Swastika Girls and included covers of both Wham!’s “Last Christmas” and “Somewhere in My Memory”, the wistful, heartrending theme from Home Alone.

“[It] came out of my early obsession with holiday music,” he says of the EP, citing a particular fascination with the UK’s litany of chart-topping Christmas singles, such as T. Rex’s “Christmas Bop” and Queen’s “Thank God It’s Christmas”. When asked whether any transcend the “cash-in” vibe of most Christmas singles, he replies, “I think every secular Christmas recording is a little commercially cynical. With the notable exception of Owen Ashworth [of Casiotone for the Painfully Alone and Advance Base], I don’t think anyone’s made a truly sincere Christmas song since Mariah.”

Such a statement discounts his own songs, however, which, like Ashworth’s, are nothing if not sincere. “Wait Another Year”, off the band’s first Christmas EP as Parenthetical Girls, takes the form of a traditional carol (“Christmas comes but once a year,” it begins sweetly), but goes on to chronicle the endless cycle of anticipation and disappointment that accompanies the holidays. “Merry hearts find ways to sing Glory, Hark, and Joy, Our King,” he sings, his detached, melancholy delivery conveying just how meaningless those latter words become as we age out of innocence. In these early releases, it’s not cynicism Pennington exudes, but disappointment. He wants to recapture the magic of Christmas, but ennui can’t help but eclipse the innate sweetness of the carol’s signature twinkle.

Not every song serves to prick the balloon that is our holiday anticipation, however. On “Do You Fear What I Fear”, a song released on 2006’s A Parenthetical Girls Family Christmas EP, Pennington acknowledges the specter of cynicism, but aims to sidestep it by “taking Christmas back this year.” “We’ll wake unafraid,” he sings, “and evade the obligations we’ve made.” This optimism extends to the rest of the EP, as the band follows “Do You Fear What I Fear?” with glimmering, playful orchestrations, a choral chant (“Carol of the Seasons” should be sung by children’s choirs the world over), and lyrics that preach positivity: “So find the time to make time, and greet each Christmas as though it were your last.”

“I like the idea of a reminder that the holidays are what you make them,” Pennington says. He won’t delude himself, however: “I don’t think I’ve ever heeded this advice.” Musically, at least, he’s right. A Parenthetical Girls Family Christmas is, by and large, the band’s most positive batch of Christmas songs. The EPs that follow, 2011’s Parenthetical Girls Save Christmas and 2012’s Good Christian Men Rejoice, It’s Parenthetical Girls, feel less about Christmas than they do about the passage of time. In songs like “Christmas Past” and “The Salvation Army Bell”, the holidays exist to remind their respective narrators of moments and bodies that, with every passing year, fade further from mind. Here, past relationships haunt like the Ghost of Christmas Past, with Pennington attempting to reconcile the rapture of what was with the longing and resentment that’s since emerged.

The best of this batch, and probably of the whole shebang, is “Christmas Mourning”, the soft, swooning opening to Good Christian Men Rejoice. It’s one of Pennington’s most fully realized Christmas songs, a throwback that wouldn’t feel out of place beside “Silver and Gold” in a Rankin-Bass special. Mournful horns, spastic woodwinds, plinking piano, and what I perceive to be the hint of a winter gust complement the wistful, romantic croon of Pennington, who sings sentimentally about barely recognizing “faces and places from whence we came.” It’s well-trodden territory for the songwriter, but presented in a way that feels entirely divorced from the quiet menace of his early work. Burl Ives could’ve sung this song.

I think of “Christmas Mourning” specifically as Pennington discusses It’s a Wonderful Life. “It’s got the redemptive socialist ending, and Zuzu’s petals, and ‘every time a bell rings’ and all that,” he says. “But before that it’s all about the death of dreams, adult resignation, and George Bailey knuckling under the pressure of a life half lived.” It’s that last phrase that registers, especially when recalling the song’s lyrics: “Those were golden days, and though my heart just breaks, they’re half a life away.”

The holidays are both an ending and a beginning, both in a religious sense and a horological one, a time to take stock of the preceding year and the promise of a new one. But how often do our years feel incomplete? How often do we feel we haven’t done enough, felt enough, or loved enough? In “Christmas Mourning”, Pennington mourns an innocence he can no longer comprehend. As a whole, these songs posit the loss of that innocence, that magic or rapture, with the sense of unfulfillment that so often accompanies the holidays. What’s so lovely about Parenthetical Girls’ Christmas tunes is that, even while exploring this depression, the band’s festive instrumentation and wide-eyed enthusiasm seeks to rediscover whatever it is we’ve lost. Whether we ever can, however, is up to you.

“You can dub sleigh bells on any ol’ thing and call it a Christmas song,” Pennington tells me. I disagree. These songs are much more than novelty. They’re honest, heartfelt, and meticulously arranged by one of this country’s most innovative musical minds. More importantly, though, they’re magical, a squall of snowflakes that, even while indulging the holiday’s melancholy, never cease to breed anticipation for it. Sing them around your fireplace. Shout them at the house of your local Scrooge. Or just hum them to yourself as your family bickers around the dinner table. If anything, they’ll make you feel less alone on the loneliest day of the year.