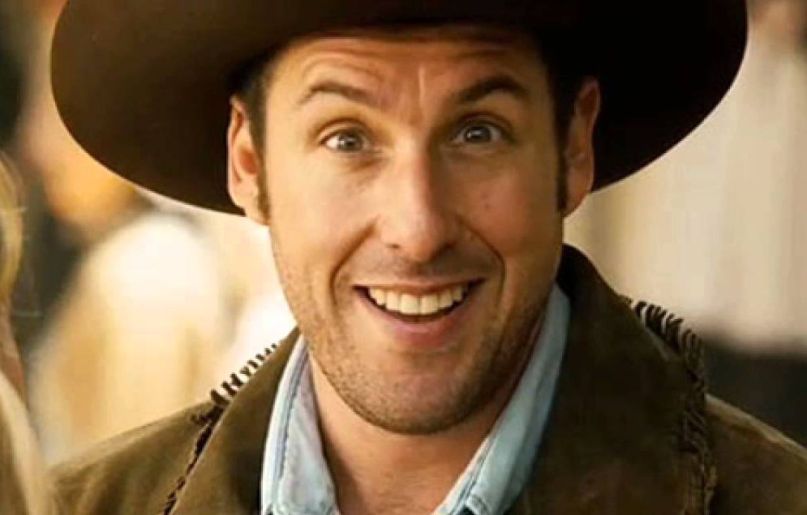 Even before it hit screens, The Ridiculous 6, Adam Sandler’s first film in his four-movie deal with Netflix came under considerable controversy as many of the Native American actors cast in the film walked off the set, objecting to the film’s outdated stereotypes and offensive jokes at the expense of their people. Now that The Ridiculous 6 has hit screens (most of them small), it’s clear that the treatment of its native characters is the least of its problems: it’s still an Adam Sandler movie.

Ostensibly a spin on Western films of all stripes, the most obvious being The Magnificent Seven, Ridiculous 6 follows Tommy Stockburn (Sandler), a white man raised among Apaches as the warrior White Knife, as he goes on a mission to rescue his newly-discovered biological father Frank (Nick Nolte, his voice sounding more like passing air through a gravel truck with each passing year) who’s been captured by stock baddie Cicero (Danny Trejo). Along the way, he runs across five of Frank’s other illegitimate sons, all by different mothers – the dopey Li’l Pete (Taylor Lautner), the Mexican gaucho Ramon (Rob Schneider), the slick gunman Danny (Luke Wilson), the mute brute Herm (Jorge Garcia), and muscular dandy Chico (Terry Crews). Together, they form a roving band of outlaws to steal the money to pay their dad’s ransom, and gallivant across a twisted, scatological version of the Wild West in the process.

My first warning to you, dear reader, is that the film is two hours long. Two hours. Sandler and crew’s desire to mock the Western epic is earnest, to be sure, but they have enough trouble filling 80 minutes with jokes, much less 120. Most of it is the typical Happy Madison tripe: Hey, that mountain looks like a dick! Terry Crews can play the piano with his dick! That donkey is sucking Taylor Lautner’s dick! (Are you sensing a pattern here?) The aforementioned Indian gags are equally execrable, as native women are given names like “Smoking Fox” and “Never Wears Bra,” among other things. The film takes a little too much glee in these jabs to support Sandler and co.’s post-walkout assertion that those jokes are just at the expense of its ignorant white characters.

However, perhaps there’s a method to their Happy Mad-ness: After about an hour, once the Six have finally assembled and they’ve finished singing a stomach-turning bonding song over a campfire, a kind of Stockholm syndrome sets in where you start leaning into the jokes. I genuinely perked up at a couple of genuinely inspired gags in hour two. For instance, the gang runs into Abner Doubleday (John Turturro), the inventor of baseball – a game he preliminarily calls “Stickie McSchnickens” – and play a test game with him. This leads to an extended bit where Doubleday makes up more and more baseball rules whole cloth to cover for his ineptitude at the game (“Strike two, you’re out.” “Strike two? No, I said three times.”). A flashback into Luke Wilson’s tragic backstory as Abe Lincoln’s short-sighted bodyguard at Ford’s Theater elicited a few laughs as well, as do some weirdly effective cameos from Vanilla Ice’s Mark Twain and Blake Shelton’s Wyatt Earp. I honestly have trouble figuring out whether or not they actually saved their decent stuff for the 70, 80-minute mark, or whether the endless string of donkey farts and nipple jokes had finally worn me down, but it happened. If you’re throwing everything you can at the wall for two straight hours, I guess something’s bound to stick.

To the film’s credit, it looks a lot better than many Happy Madison productions, which too often look like YouTube insurance commercials you just can’t skip. Director Frank Coraci and cinematographer Dean Semler make an admirable effort to replicate the size and scope of the John Ford Western, with some impressive compositions here and there to evoke that sense of bigness endemic to the genre. That being said, the end result gives The Ridiculous 6 a production quality marginally higher than a Funny or Die video, as the typically stunning Western landscapes are interrupted by shoddy sets and some truly awful CGI gags. The action scenes themselves are decent enough to avoid any scathing criticism (I’ll admit to enjoying White Knife’s Assassin’s Creed-level agility, which itself becomes one of the better jokes), but at this point, the bar is so low for Happy Madison films that to reach for it is to risk touching mantle.

Whatever you think about Adam Sandler right now, The Ridiculous 6 won’t change your mind. If you love him, you’ll love this; if you hate him, you’ll get plenty of ammo here. I so want to be fair to this movie: it’s a little less lazy than his usual stuff, at least. Sandler himself is comparatively inoffensive, smartly stepping back into the straight-man role as the supporting cast do the heavy lifting. There’s even something about the illegitimate-son angle to the gang’s creation that lends the gang-as-family trope a unique little spin. Unfortunately, it’s all buried in the same stale, adolescent humor that plagues the rest of Happy Madison’s oeuvre. Catch the good bits on YouTube if you feel like it; otherwise, just move along, little dogie.