Plus, Vasquez answers questions about Solicitor Returns in an exclusive Q&A 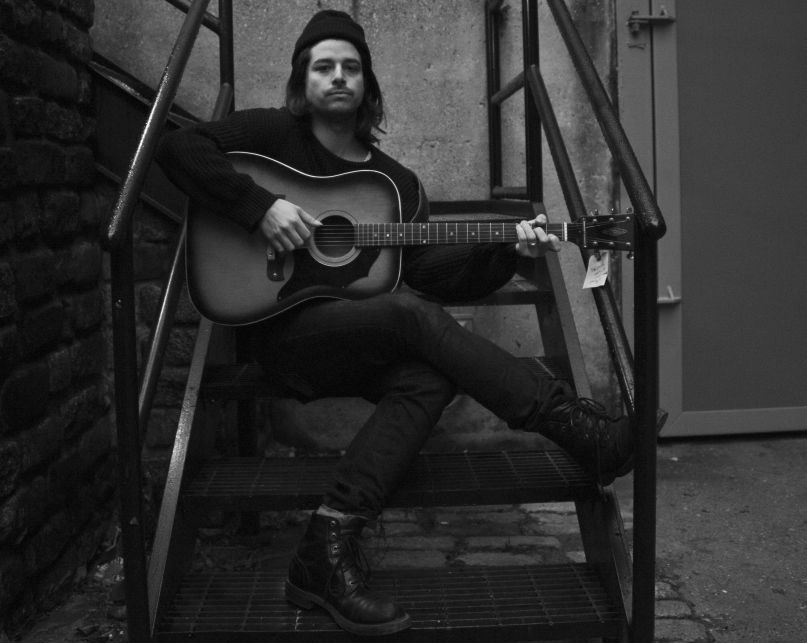 Matthew Logan Vasquez is known to fans of folk and rock as the untamed frontman of Delta Spirit and one-third of the supergroup Middle Brother. When his mainstay outfit took a break after intensively touring behind their latest record, Into the Wide, he saw a chance to introduce listeners to yet another side of himself. He’d always had more music inside of him than two bands could handle anyway, so he finally took the opportunity to go solo. Step one was the Austin EP he released back in November, and now he’s taking step two with his debut solo full-length, Solicitor Returns, out February 9th.

In addition to giving Vasquez the chance to put his stockpile of songs to good use, the album allowed him to get back to the down-and-dirty style of rock and roll recording he loves. Every instrument on the album save for two drum tracks and one guitar track is played by his own hands. As a first sample of what a truly Matthew Logan Vasquez album that makes Solicitor Returns, he’s shared the lead single “Maria”.

Right away, you can hear the variety of sounds and styles the journeyman brings to his music. A lonely acoustic guitar strums away under an electric one bending out the reverberations of ’70s rock, both cutting lines in the dirty dirge of the drums. Vasquez’s voice crackles cleanly as he sings out lyrics he first wrote on an airplane cocktail napkin: “I can’t find mother Maria/ Am I lost in Santaria?/ I will do anything as long as I can see her.” All together, the result is a woody folk song baked out on classic rock rays that burns lonely and bright like neglected ambers.

To go along with the song premiere, Vasquez answered a few questions for Consequence of Sound about the new record. He discussed recording solo, how “Maria” came to be, and what listeners can expect from Solicitor Returns. Plus, he hints at the return of Delta Spirit, so read on to learn more.

You released your solo debut EP just this November, and now less than half a year later, you’re dropping your debut full-length. Was the plan always to have it move this quickly, or if not, what spurred on the musical output? Is anything on the EP also present on the LP?

I had to release these quickly back to back because I have a limited time to work this project. Delta Spirit is already gearing up for its next record, Kelly [Winrich of Delta Spirit] and I have been scoring a film called Brave New Jersey staring Tony Hale, and I also have a growing family in Austin I need to get back to.

As far as what spurred all this on? I need more of an outlet than 11 songs every 3 years. I wrote 45 songs for the last Delta Spirit record. Some songs I thought might end up on a Middle Brother record, but that project never came back around. Robert Ellis took a song off my hands for his next album. There is one repeat track and that’s “Everything I Do Is Out”, I love that song. It’s sounds so sweaty.

What can fans who’ve followed you through Delta Spirit and Middle Brother expect from Matthew Logan Vasquez solo? Will we be able to pick up on past threads or is this a completely new journey?

The main difference between this and Delta Spirit would be, my solo music is far less thought out. It’s more shot from the hip, and done in 3 takes type of music. In that way I’d say it’s more like Middle Brother. Hopefully you hear how much fun I was having when I made it!

How has writing as a solo artist differed from your work as a member of a band? Do you find it more freeing or more challenging? How long have these solo releases been in the works, both internally and as actual projects?

Songwriting is mostly a solitary adventure. So in that way not much has changed. The DS band dynamic starts after the songs are written. That’s when all the fights start about what chord and why, this groove and that pocket. 10 years of brotherhood is something we’re really proud of. Every DS record has to be a reinvention of itself or it’s not worth doing. It’s a lot of pressure to put on yourself. Just imagine. The livelihood of your 4 best friends are intermingled with what you decide to create together. Oh yeah and now you’re starting to have kids!

I needed a season of pushing all that pressure away and stepping into something more simple. When you’re the only person in the room it’s a lot easier to get things done.  I had some friends popping in once and awhile. Their company and positive feedback was nice to have. But mostly I enjoyed the solitude. I don’t write music for a specific project or even a reason. I just love to do it. Certain things fit with certain things, and now everything else fits with this.

Talk about “Maria” a little bit. What’s going on in the song and why did you deem this to be the best track to lead the album with? How does it fit into or exemplify the LP as a whole?

I wrote Maria on a flight from LaGuardia to LAX. The melody hit me. I wrote the lyrics on those little cocktail napkins they give you. For two days the song was stuck in my head, until I got back to Brooklyn and recorded it. I can remember grinning ear to ear while recording every element of Maria. There’s something in her that fills me with joy. Joy is what I felt making most of the record. Alone in my Brooklyn cave playing really loud! Happy as a pig in shit!

Where does the album get its title, Solicitor Returns, from, and what’s its significance?

Solicitor was a fantasy project of mine that I started after DS’s self-titled LP was recorded. When we got back home to LBC my mind was in such a creative lane. I recorded this strange record with strange songs. Friends would come over and suggest ideas and help me. It was one of the most fun times I’ve had making music. It was mixed and mastered, but when the time came I was talked out of releasing it for fear of hurting the band. To be fair the record was pretty damn weird.

Fast forward 3 years and we (Delta Spirit) had just finished recording Into the Wide. I had way too many songs and clear memory of what went wrong last time. So now this is my insanity made more palatable.