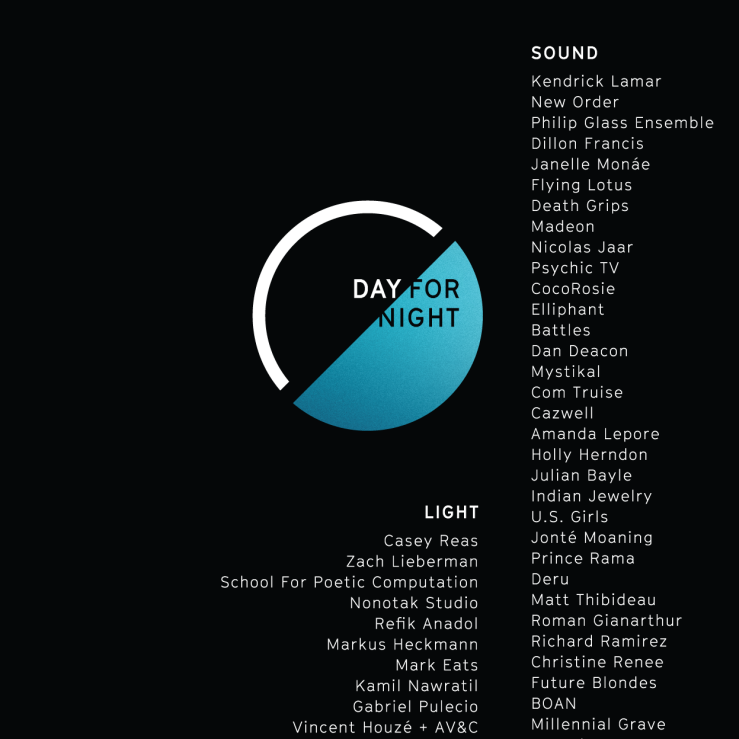 With the proliferation of music festivals today, it’s hard to get excited about an event simply because it is new. Harder still is trusting promotional claims that a new festival will offer a “unique experience.” The plentiful mediocrity of lineups and festival designs often blurs together. For Houston’s inaugural Day for Night Festival, however, mystery piqued our interest, and their ambition delivered in spades. Describing Day for Night was a struggle even for those closest to the festival; videos called it a “music festival inside an art installation,” but with six acres filled with visual artists and musicians, it was hard to conceptualize just what that would mean. Even after speaking with one of the head event promoters, my brain was still spinning for a reference point as we approached the entrance early Saturday afternoon.

Walking through the gates was a whirlwind — box office confusion and lax security were par for the course, as far as first-year logistics. After some short waiting and heavy radio chatter, everyone seemed to find their rhythm. Even once on-site, it took a while to wrap your arms around exactly where we were: It was a sea of concrete, warehouses, and makeshift carpet fields. As my bearings cemented, Day for Night’s layout revealed itself to be surprisingly cohesive. Three stages supported the musical acts: Red for the biggest names, Green for the electronic or atmospheric acts, and Blue for the homegrown or excessively weird performers. Speckled between these stages were two different warehouse-encased installations and a separate gallery showcasing exhibitions from renowned digital and multimedia artists. Day for Night’s confluence of art and music seemed to be best exemplified by the Green stage and adjacent art gallery. One moment patrons could be listening to Nicolas Jaar or Dan Deacon within a massive rectangular warehouse, the next they could step through an opening in the white brick side-wall into a world of projections like that of Casey Reyes, whose piece played both on abrasive musical ambiance and multilayered digital images that confounded normal visual processes.

This fusion raised another question: Who was Day for Night aimed at? It’s a question that can’t really be answered demographically. At its simplest, Day for Night was a festival for the fringe, for the weirdos and the obsessively hip alike. But for those not in either category, there was no air of pretension or inaccessibility. Whether you wanted to investigate the intention behind the light and sound around you, or just take some drugs, giggle, and observe, Day for Night created an atmosphere that left the choice to its audience.

A drawback of this wide-ranging appeal is that things may have been spread too thin for a first-year festival. Although headlining shows garnered sizable crowds and select daytime acts fared well, even prominent events seemed to draw only a few thousand people. This did, however, lead to an ease of mobility and an intimacy with the artists — one could easily spot the likes of Shamir and members of HEALTH strolling the grounds. Also notable was the lack of gaudy corporate sponsors. The  sparse attendance and lack of corporate involvement does bring into question the fest’s sustainability, though; the current festival scene isn’t always kind to those who ignore the powers that be. With year one under their belt, hopefully the strength of fan appreciation will allow DFN to grow while holding onto its individuality.

By Sunday evening, several unforgettable performances had been delivered, with New Order and Kendrick Lamar providing a one-two punch on par with any major festival this year. Rarities like Philip Glass added a depth and variety that made for a positively singular experience. The timing of the festival gives it few direct competitors, and Day for Night has undoubtedly taken great risks in creating a framework that effectively sets it apart. It will be interesting to see just how far this festival can go. –Kevin McMahon

Click through to see our top 15 moments from the inaugural year.