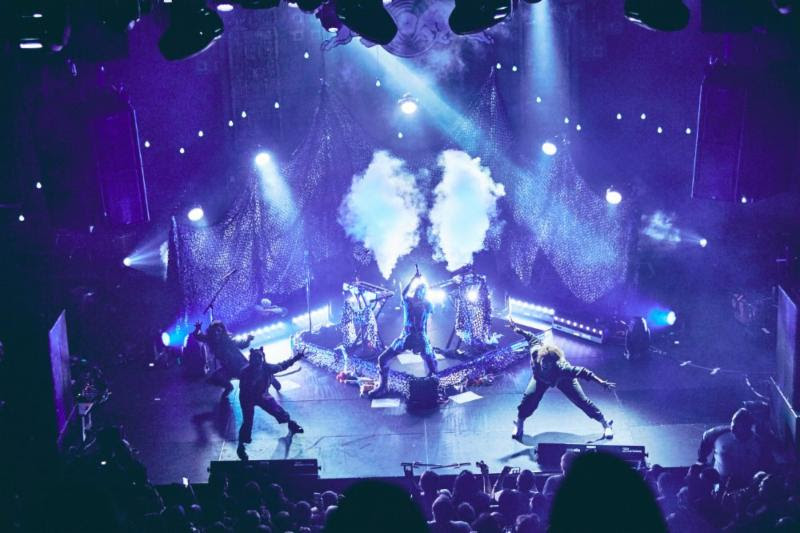 It’s a special week for Team Grimes. For the Canadian songwriter and producer herself, it’s release week, as her long-awaited Art Angels is set to be unveiled on Friday. For the event organizer behind Claire Boucher’s performance at the Mayan on Monday night, Red Bull Sound Select, it was the first proper concert in a month-long residency, 30 Days in LA, that will feature different acts at local venues for all of November.

On Red Bull’s part, the event series has clearly worked out the kinks after a successful run last year, curating a bill that paired Grimes with her coop signee Nicole Dollanganger, and presenting it in a tastefully branded setting. It’s still hard to understand why they aren’t giving away Red Bulls by the handful at these things, but the free tacos, free Kit Kats, and affordable concerts are more than enough to make up for a few of the brand’s logos sprinkled around the venue.

Opening the show, Dollanganger proved her Natural Born Losers LP to be a bit of a red herring with regards to her live presentation. Gone were the intimate vocals and delicate arrangements, replaced by heavy guitars and percussion that was played in part by her guitarist hitting a cymbal with the end of his instrument. Any metal vibes were solidified when she announced she would be playing a Type O Negative cover, finishing her declaration with a playful giggle that summed up the intriguing juxtaposition of her music. Dollanganger has been in our consciousness for just a few months, but with her album and now her live show, she’s proving as difficult to pin down as the night’s headliner.

Over the past few years, fans have witnessed Grimes grow leaps and bounds as a performer. When Visions was first released, the concerts would feature her planted behind her instruments, focused on reinterpreting the complex tunes for the live setting. But slowly, Grimes began incorporating periods where she’d wander to the front of the stage. Then she started adding choreographed dancers into the routine. Now that Art Angels is launching a whole new touring cycle, Grimes has continued her progression into an exuberant live force.

These days, her dancers are a fixture of nearly every song, while the addition of a backing vocalist allows the singer a little more freedom to dance and interact with the fans. Still, Grimes’ tendency to be overcome by moments makes the overall performance perilous at times. Early numbers like the new song “laughing and not being normal” and “Genesis” found her high-fiving her fans, only to leap back to her station at the last minute to trigger another sample. During “Venus Fly”, one of the best of the new songs with its pre-recorded assistance from Janelle Monáe, the complexity of the presentation got the better of her, and the song came to a halt right in the middle.

The audience didn’t care about the mistake as much as Grimes did, cheering wildly while Boucher looked embarrassed. Still, she managed to pick the song’s energy right back up, proving the audience to be particularly game with regards to the new material. Perhaps the best thing that can be said of the new Grimes songs is that they don’t lack for her personality. “Scream” and “Kill V. Maim” both attempt to overwhelm the audience with their grandeur and attitude. Nothing about the songs finds Grimes playing it safe. They show a willingness to let the music match the amount of fun she appears to be having while playing it. Whenever she would pause to address the crowd, taking a moment to catch her breath, the breaks felt deserved. They felt necessary to her complete artistic commitment.