Film Review: The Night Before 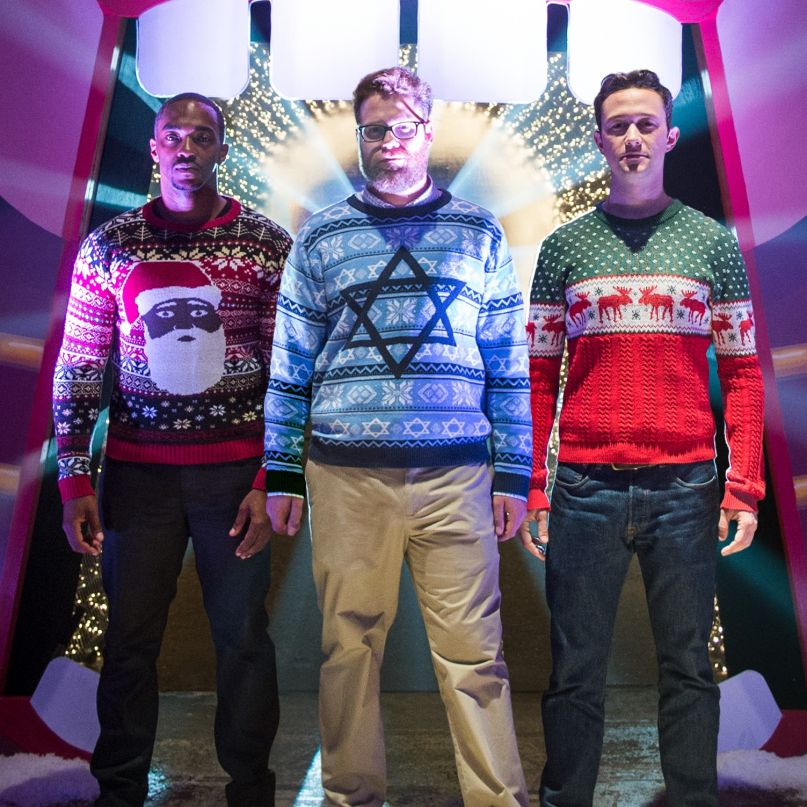 Imagine you have a fuck-up son, and he’s presented you with a holiday playlist featuring classical versions of “Ode To Joy” mixed uncreatively, noisily really, with “Christmas in Hollis”, and even tunes from The Grinch and Die Hard. The Home Alone score’s in there for some flavor. There’s maybe even a little Miley Cyrus or Tony Bennett. All this and more will be blasted for guests and family with a knowing smirk. The son will demand everyone’s attention, too, asking for help to set up music. “Where’s the Aux?!” he’ll bleat. “Crazy Cristmas Mixx” might be Sharpied on this mix if it’s still a CD. The music’s everything, and yet nothing but a nostalgic record scratch of holiday familiarity with little to no purpose outside of kitsch appeal and drinking-tune familiarity. Putting this baby on is a guaranteed holiday headache, while the quarter-lifer that made the mix is spilling champagne and cranberry sauce all over the place.

That’s what The Night Before feels like. From a holiday perspective, it’s a bad mix of overwrought Christmas minutiae amounting to nothing substantial. Coal may seem merrier. At least there’s a thesis to it.

Jonathan Levine’s The Night Before has to be one of the coarsest, most grating, and most insincere attempts at alternative holiday commercial follies since Richard Donner’s odorous Scrooged. Here, it’s a new odor: murderous amounts of shrooms and liquor hazing attempts to modernize Christmas. This is not the Scrooge-y ranting of a grump chastising libations and imbibing around the most stressful time of year, no. The Night Before just layers on its excesses so thick that it’s like 20 layers of Christmas wrapping masking a cheap gift.

Joseph Gordon-Levitt mugs it up as Ethan. He’s just your typical 33-year-old New York party boy with no money and an outrageous loft (not to mention dreams of being an acoustic-wielding singer-songwriter sensation, hoo boy). Ethan lost his parents in a tragic accident in 2001, and since then, he’s clung on to ironic Christmas celebrations (he has a Wu-Tang ugly sweater, people) with his dudes, Isaac (Seth Rogen, never more undisciplined) and Chris (Anthony Mackie, working the right kind of charm in the wrong kind of character). The three have traditionalized their holiday boozefest for years, and this year’s the big one. This time, they manage to make it into a double-secret holiday party called the Nutcracka Ball, something Ethan’s dreamt of attending for years. This is the final hurrah before Isaac becomes a dad. Chris’ career in pro football is making him more and more unreachable. And Ethan, well, needs to grow up. But one big, final warehouse rave blended with copious amphetamines and loose allusions to Dickens and every popular Christmas film from the last 25 years are in order.

Rogen devolves into a drugged caricature so quickly that’s there no rhyme or reason to anything he does; Pineapple Express was about as high as he should ever get onscreen. As for Gordon-Levitt, well, his smiles only get him so far before he’s literally gets punched in the face for being so obsessed with the spirit of Christmas. (“Santa’s not real, ya pricky infant!” JGL’s assailant has to remind him.) And as for Mackie, well, the guy takes a jock stereotype with an inflated ego and at least gives his character real charisma, but perhaps the hits to the head are why he’s so obtuse about his own vanity and wrong-doing. It’s just not all that incisive or sharp-witted to watch three guys work themselves into a flop sweat and truth-bomb each other. Here’s a film marked by its crammed referential humor, its aberrant, stiff monologues about love and the season, and its braggingly naughty mood. Actually, in the simplest terms, The Night Before sees to the bro-ification of Christmas.

Now, not all is lost on this Christmas caper. Desperate dongus humor, the occasional unexpected outburst of coke-induced paranoia, and the reliably odd Michael Shannon doing his best impression of Stephen Wright makes Levine’s film worthy of laughs. At times. There are even a few cameos that’ll play well, but still, what is it with main characters in modern movies constantly reminding the audience of the cameo by uttering said celebrity’s name in full, over and over?

Levine directs this, and he also made the deftly comic, invigorating 50/50 with Rogen and Gordon-Levitt in 2011, and comparing this film to that one is like apples to apple-bowls. Whereas the former film was a crystal-clear distillation of the powers of male bonding, The Night Before opts for rambunctious bad-boy behavior free of real consequence.

To say The Night Before is over-written is like saying the Hindenburg was a little loud. Levine gets a story credit, then through the miracle of truncation (and likely, the forced aggressive expansion once stars and studio locked onto his script), the finished product has four credited writers. Did Levine give up on a simpler story and allow multiple people to run roughshod over his once-little Christmas fable? Was one of them tasked with giving Mackie dialogue about the brand new Sony Xperia phone.

This holiday season, give yourself the gift of time, and money, by skipping The Night Before.