Tom Hardy turns in two great performances, but the film offers little else 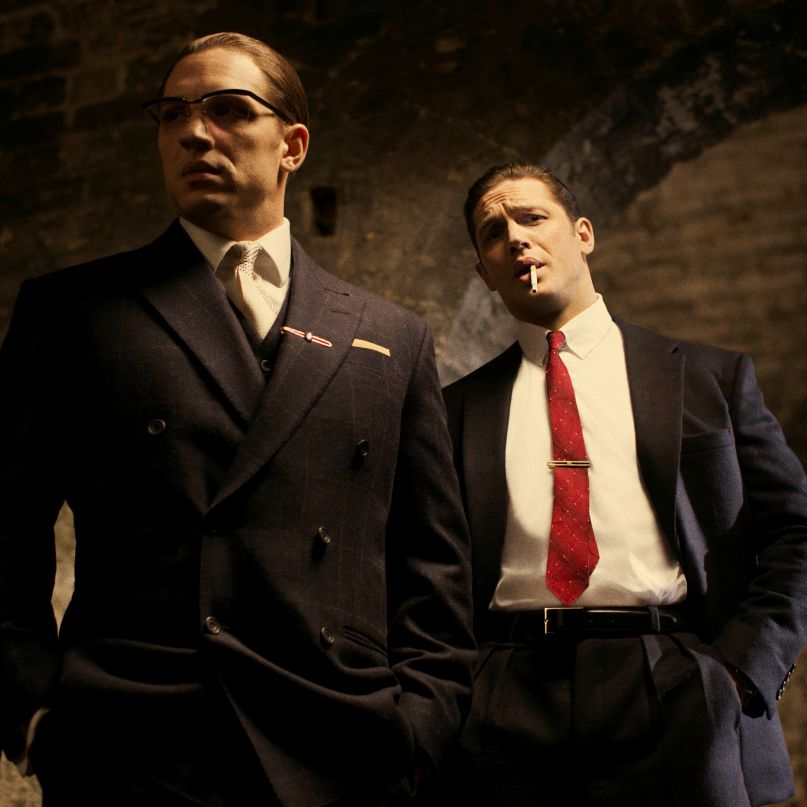 In interviews, Tom Hardy has often acknowledged and even joked about the disconnect between his relatively posh upbringing and the tough-guy roles on which he’s made his name, so it’s then fitting that in Legend he’s allowed to split the difference by playing both modes, simultaneously, as two different characters. The story of the infamous Kray brothers, twin ‘60s gangsters in London’s East End who reigned supreme through a mixture of intimidation, real estate acquisition, and fits of brutal violence when deemed necessary, Legend offers Hardy the sort of role that an actor can really sink their teeth into. And if the film itself doesn’t ever really match the level of effort on hand, it’s not for any lack of effort on the endlessly versatile actor’s part.

Legend races through the Krays’ ascent to power so that writer-director Brian Helgeland can indulge what’s clearly his foremost preoccupation with the material: the insane lengths to which the twin brothers went to maintain their empire, and the madness of them being able to carry on as they did, for as long as they did, more or less unabated. The more natural (and less aggressively showy) of the two performances is Hardy’s as Reggie, the smoother operator of the brothers. The consummate snake charmer, Reggie quickly established himself as the sort of neighborhood-ruling figure that makes one police officer comment early on about how “[the locals] won’t talk to a policeman, but they’ll kiss a gangster.” Reggie is the face of the operation, the casino owner with aspirations of moving his empire to the more respectable and less working-class west end.

Then there’s Ron, as strange a creation as Hardy’s delivered to date. With a perpetually ajar mouth betraying a mild underbite and a gaze that’s always too intensely set on its targets, Legend establishes Ron from his first moments as the sort of chaotic figure capable of destroying anything he touches. Hardy piles on the tics and flourishes, as does Helgeland: Ron was an open and (for the time) surprisingly voracious homosexual, in addition to serving as the muscular, more sadistic half of the Kray empire. Where Reggie’s aim is to build a criminal enterprise so wide-ranging that he could adopt the vestiges of legitimacy, Ron gets off on the power and violence of the nitty-gritty business that keeps any gang humming.

Ron ends up the more engaging creation of the two throughout Legend, but this is chiefly owed to how Helgeland approaches the material. The film plays better (if with a touch more nihilism) when it surrenders itself to the pulpy thrills of lives lived wildly and without the slightest intentions of repentance. Eventually Legend capitulates to the Krays’ ideals of noble violence and nobler self-preservation, and becomes a nastier film for it, but up to a point Ron’s overindulgences feel substantially more honest than the moments in which Reggie must contemplate the inevitable futility of the life he’s chosen, or in particular, the points at which said contemplation is spurred on by Frances (Emily Browning), whose narration breaks down her tortured love affair with Reggie over endless years.

Because Legend spells out early that trouble will eventually find the Krays, suggested by everything from Frances’ musings on the fleeting early days of her time with Reggie to Ron’s open contempt for the “synthetic opulence” of a more well-masked underground empire, the film starts to wear out the goodwill of Hardy’s all-in performance before long. Hardy does a remarkable job of playing each performance off the other, exposing the schisms in the brothers’ relationships and in Ron’s self-admitted fragility, and his scenes with Browning are effective if reminiscent of so many other stories of molls and the violent men they come to love, but when so much of Legend is interested solely in the Krays’ wild exploits, there’s only so much anarchy the film can carry on with conviction and the occasional snap of a well-placed one-liner before it’s clear that nothing much will really happen until it’s time for the going to get tough.

Legend ultimately avails itself as a celebration of a time when corruption wore a more glamorous skin, with little to no interest in any manner of critique of or commentary on the Krays’ general viciousness. Helgeland only intermittently finds the consistent tone of dark irreverence for which the film at large attempts to find, which becomes a increasingly huge problem in the film’s less decadent and celebratory final third. Because the Krays are treated in so many respects as renegade models of old-world decadence, even in the moments when Helgeland fills the spaces between banter with bracingly graphic violence, Legend is left in the unenviable position of attempting to make its many disparate parts fit into a whole that never really feels complete.