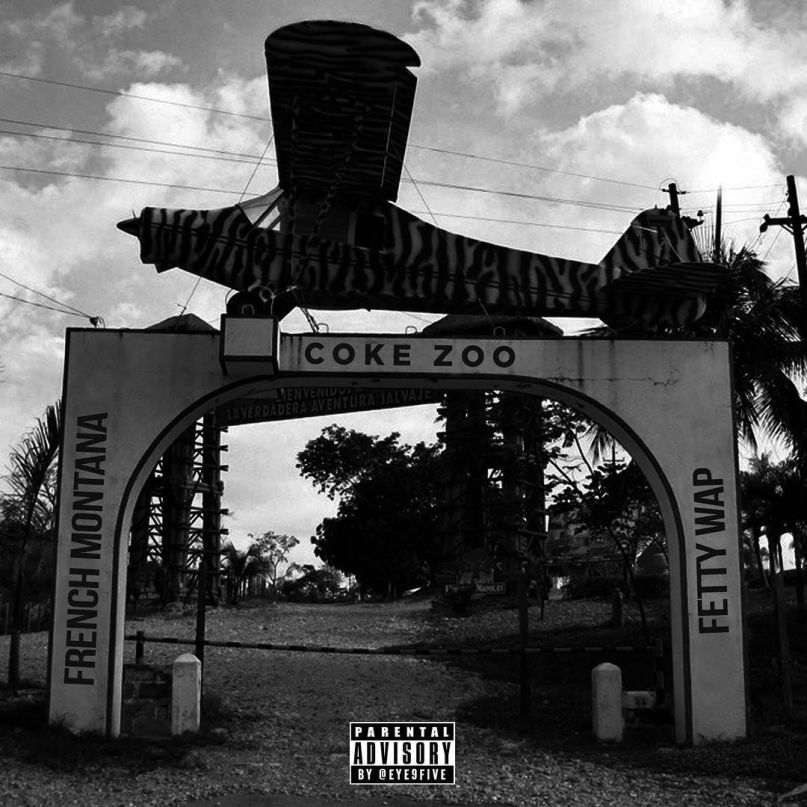 No matter what you think of each individual example — and opinions vary pretty drastically for things like Future and Drake, or even Kanye and Jay Z — this new wave of high-profile rappers teaming up for projects is a thrilling prospect. I can think of a dozen collaborative projects of the sort from decades past that would redefine the landscape and a dozen more that may not have made that large of a wave but still have been a ton of fun. The new mixtape from French Montana and Fetty Wap would solidly fall into the latter half of that equation, if not for the fact that it’s not all that fun either. Coke Zoo is a fine tape lacking in iconic moments, memorable beats, or powerful hooks, rolling by without making much of an impression.

Neither Montana nor Fetty are the type of rapper to wow hip-hop heads with their inventive rhyme schemes or complex wordplay. These are guys that win you over with personality and style, and the tape is branded under their joint heading — a point at which two exciting personalities could weave and flow together. As such, it’s a detriment that Fetty Wap only appears on seven of the 13 tracks. In fact, there are only five beats on which the two actually share space. Instead, the tape plays like a selection of decent-to-good leftovers from each artist’s catalog punctuated by a few attempts to fuse their styles.

Fetty Wap makes up for missed time on his tracks, though, filling them with an almost uncountable quantity of “yeeeeah baby” ad libs — not that Montana was holding back on his trademark vocalizations either. “Power”, the first track to include both artists, stitches together a Fetty-sung warbling hook and some slick boasts from French. “I chase the money not the fame, baby/ I flex, finesse and do my thang, baby,” Wap drops, leading his counterpart to some generic but entertaining lines about booze, ladies, cash, and gold. Fetty’s sing-song flow on the verse and seriously falsetto backing vocals power the chilled, sultry “Angel”, giving space for Montana to pick and pop at his spots.

The less successful tracks fail to feed both artists’ strengths, particularly when relegating Fetty Wap to the background. That “yeah baby” ad lib gets used on just about every bar on the exhausting “Freaky”, to the point that you’d think the beat was crafted in party by a Fetty soundboard. On “Whip It”, he’s relegated to a sort of secondary hook, which itself doubles as a hook to a track with PnB Rock called “Jealous”. The wobbling singing and synth organ stabs on “Sometimes” could come from any number of tracks released in the last six months, the two rappers’ star power blunted by their generic surroundings.

The solo tracks similarly run the gamut from paint-by-numbers blandness to flashes of their creators’ genius. “Last of the Real Ones” relies on a glitchy hook from Zack Kharbouch, leaving his brother French to AutoTune his heartfelt lines in the icy, smoke-filled space. Lil Durk and some old-school sax samples bring some real snap and intensity to a Fetty-less Montana track. On the other hand, hearing Chris Brown sing about “The Gangsta Way” while French drops some AutoTuned speak-singing only goes to show exactly how close pop rap and pop country have gotten these days. The two Fetty tracks — the toy piano knock-about “Damn Chainz” and the busier, more exciting “My Squad” — are fine, but certainly nothing to write home about considering the massive hooks for which Fetty got his name in the public consciousness not long ago.

Coke Zoo would’ve made a lot more sense as a five-track EP, with the remaining solo songs saved for other projects or dropped on Soundcloud on their own. As it stands, the 13 songs come together as an inconsistent, jumbled package. The only reason to complain about two high-profile rappers working together is when they’re not really working together, and too often on Coke Zoo, Fetty Wap and French Montana sound entirely disconnected.