The Director’s Chair: A Chat with Neon Indian’s Alan Palomo 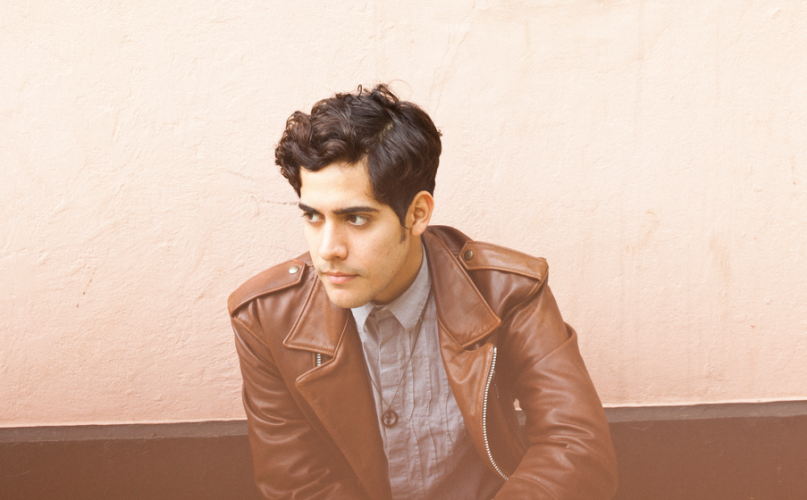 Alan Palomo sips his coffee as he walks about the Mind Melt stage at III Points Festival with his tour manager Hanford Pittman. They are talking about the layout of the stage and finishing soundcheck. How can a man drink piping hot coffee in this Miami heat? It’s 95 degrees outside, and we’re standing on a black and nearly barren stage, not a cloud in the sky. Still, when you have an album, Vega Intl. Night School, due out in less than eight days, I can only assume you take whatever keeps you going.

This is Palomo’s first LP as Neon Indian in nearly four years. While it’s been a long turnaround for a third entry — the album’s release was delayed earlier this year — the rollout of singles over the last three months has been more than charming enough to make up for it. With “Annie”, we get a glossy ’80s yesteryear with a nod to Genesis. With “The Glitzy Hive”, we’re offered a more innocent Prince persona. Where Prince would serve up intricate analogies of provocative sexual behavior, Palomo just wants to let you know that you look beautiful and there’s dancing to be done. Simple enough.

As Palomo and I prepare for our interview, III Points Festival materializes around us. Forklifts fly by, sweat pours down our faces. I can’t help but notice the calmness in Palomo’s pose, regardless of the chaos that surrounds our interview. What follows isn’t so much an interview as it is a conversation about overcoming the largest challenges of any production, art, or music piece — the process of getting it to your audience and what the digestion process looks and feels like.

You have an album coming out within the next few days. I wanted to take this opportunity and talk about not only the focus of the album but the momentum leading up to it over the last four years. How do you feel about the work thus far?

The [singles] rollouts have been pretty surreal. It’s like having gone from this position where I hadn’t toured in almost three years and realizing that I’m a little long in the tooth, as they say. I’m just getting my feet wet all over again and learning how to be a functional human being. The first tour is always gonna be like the first hundred pages of Hammer of the Gods, the Zeppelin bio, you know?

We were a bunch of kids in our early 20s who had no idea how to carry ourselves. You’re essentially handed scenarios where you’re performing music live and getting to travel the world, but on a long enough timeline, you definitely start feeling the vocational weight of it. There’s this thing that my dad used to always say: “This is a honeymoon period right now, but you’re going to realize at some point that this is a vocation like any other. It requires a lot of self-discipline.” In the past three days, I’ve gotten to finally direct my own music video. It’s been a heavy couple of days. I’m at the eye of the storm. The record comes out in less than a week, and I feel like fuckin’ George Clooney in The Perfect Storm.

At least your dad slapped you prematurely with the reality of your work, right?

How do you overcome those uncomfortable boundaries for yourself?

I mean, I should be so lucky that I’m able to facilitate some life in the arts.

Three albums deep, too. That is not an easy feat.

Thank you. Ultimately, I feel great about it because there’s that certain transition into adulthood where there’s some accountability for what you’re doing and there’s something to show for it. I would imagine that in most permutations of being self-employed, it’s difficult to explain that, not only to friends and family, but just to strangers. Like, “What do you do?” “Oh, I’m a musician.” There’s this assumption that I’m playing a fiddle in a subway somewhere, like, “Please help me, I’m studying at Berklee.”

There are some growing pains. The irony of being a musician by trade is how little music you actually get to make. But I am absolutely in love with this record and feel like I made a good amalgam of all these ideas that I wanted to get across since I started making music. This album is definitely a mission statement communicating all of that.

Do you ever have moments where you just go, “Fuck this message. I want to do a different message right now”?

Once again, it goes back to the vocational attitude about it. I could potentially already be in that place where I’m like, “Yeah, the record’s done. I already turned that in.” My expectations were fulfilled when I turned it in. Anything that happens as a corollary result of that, I’ll be happy to have it, but it’s an afterthought, essentially.

I think the newness comes from the context in which you’re performing it. You’re in front of a new set of people in a different city, and that’s when you start internalizing the fact that there are people that enjoy your music and are willing to come out and see it. That’s the fulfilling component of touring, because touring is mostly logistical. It’s just problem solving. You have to get creative in a different sense.

The work was already put in a couple months ago when we learned how to play the songs, and now we do it every night. So I think the freshness is going to come from the feedback. We have our traveling circus, and we have our stops in every town. It’s an ongoing thing, but then again, I’m already thinking about what else I want to be doing. At the very least, I think the tour can be very meditative when you’re just sitting in a van, looking out the window, and dreaming about what’s next.

Do you personify the album or imagine it in a certain way?

When we were mixing the record, we were watching After Hours with the sound off, and I thought, “Oh man, I made After Hours meets Airplane.” It’s like a screwball comedy about nighttime New York. New York is a city that gets mythologized by a lot of filmmakers, so you have [Martin] Scorsese making his more obscure movies, like King of Comedy or After Hours, and you’ve got Abel Ferrera making Fear City and Ms. 45. Everybody has their own distorted lens through which they attempt to perceive New York. In the mixing process, I wanted to have my own grotesque, cartoonish reimagining of what I would imagine my life in New York to have been over the past few years. And if I couldn’t do it in film, then I would do it in music. That was the intent with this record.

So film impacted your craft?

I mean, I think it always has. When I started making music, there was no formalized skill set by which I was studying. And I would say this because my brother and my dad, they’ve been musicians their whole lives — they’re men of their instruments. My brother’s been playing the bass since he was six, and my dad’s been singing and playing guitar since he was a kid as well. I was always more interested in movies, and that’s what I studied in college, so when I started making music, the only real framework by which I could perceive it was thinking about it in terms of movies. When I’m working on music, I always imagine, in the context of the record, what scene in the film would this be?

The album artwork for Vega is so different from what you’ve put out in the past. Is this all a new aesthetic and theme for us to involve ourselves with?

Well, to some extent. I think initially, when I started writing the record, I thought it was going to be a Vega record. I’d been wanting to come back to dance music since I had written the Well Known Pleasures EP. I felt like I had sort of short-sighted that project a little bit and chipped at the narrative to Neon Indian. And to some extent, I don’t think I had the skill set to work in dance production back then. I realized that certain production components from Neon Indian were spilling into these demos and vice versa and that it just didn’t really warrant splitting hairs anymore. It made a lot more sense just to merge these two lanes aesthetically into one thing, because that was essentially where Neon Indian was going anyway.

Neon Indian was always informed by Italo Disco and then eventually Belgium new beat stuff and Balearic beat. I was essentially being fed by my interests as a DJ; it only made sense that if this wasn’t going to be a Vega record, that at the very least I could celebrate the merger of this much larger aesthetic consortium by including the nod to Vega in the title. I was actually going to change the name to Vega International because I like the idea that it sounds like a consortium, like a sort of weird company that essentially gives me carte blanche to keep elaborating on it.

Night School was just kind of this thematic idea. There’s this common thread throughout the record of acknowledging that most of what I’ve learned about human nature in my 20s has happened after dark. I don’t like to be overly romantic when I say that, because it also comes from my work life. I live across the street from a stone factory, so I wake up to jackhammers every morning, and it just kind of stays that way until the late afternoon. The only time I really start finding Zen is at night.

What a terrible thing for anyone to wake up to.

I mean, it is what it is. That’s the nature of New York, right? Some guy’s just outside banging on a trash can. It’s like living next to a production of Stomp. That’s literally what life in New York is like. So yeah, finding Zen is always a bit of a feat that doesn’t happen until after dark. And I’ve always been more of a night person. I would love to be the kind of person that can wake up in the morning, do child’s pose, sun salute, have my little yoga morning and go jogging, but it’s never been characteristic. I remember one of my friends had told me he had read somewhere that Prince’s most productive work hours are between nine and four in the morning, and it’s definitely consolation. I remember thinking, “If it’s good enough for Prince, I should only hope that it’s good enough for me.”

That’s a fine template to live by.

Definitely. It made me feel a little better about having this completely flipped schedule. But at the same time, it creates a certain friction between your social life and your work life. New York is a great place to be your own boss, but not necessarily your own employee.