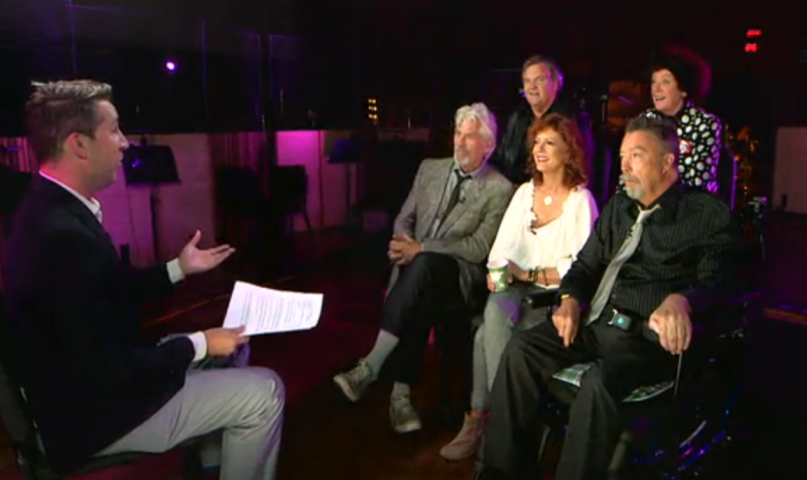 The Rocky Horror Picture Show, perhaps the first true cult classic and the longest-running theatrical release in the history of cinema, celebrates its 40th anniversary this year. To mark the occasion, Entertainment Weekly brought some of the cast together for the first time in 25 yeas. Though the gathering was primarily for the magazine’s upcoming reunion issue, Today Show was on hand to interview the cult legends.

Barry Bostwick (Brad), Susan Sarandon (his on-screen fiancé Janet), Meat Loaf (the undead Eddie), Patricia Quinn (Magenta), and Dr. Frank-N-Furter himself Tim Curry sat down with NBC’s Joe Fryer for the chat. With a hint of chagrin in her voice, Sarandon recounted how being involved in the “Time Warp” has affected her life. “Absolutely,” she replied when Bostwick asked if she ever actually learned the dance. “I’ve had to do it on numerous occasions. So often it rears its head.”

Curry recalled how he came up with his iconic sweet transvestite from transexual Transylvania. “Originally I played him as a German,” Curry revealed. “And then one day I was on a London bus and I heard a woman say, ‘Do you have a house in town?’ And I thought, ‘That’s it! He should sound like the queen!’… It changed everything.”

Meat Loaf remembered wearing a garter belt, fishnet stockings, and high-heeled shoes while weighing 315 pounds. Sarandon, meanwhile, had her own difficulties while filming. “I got pneumonia. We were in a house, they hadn’t put the roof back on. That was leaking and open, and it was December, January. It was winter.”

Despite the filming hardships and the movie’s relative failure at the box office during its initial release, the message of The Rocky Horror Picture Show lives on. “The thing that resonated for me more than anything was, ‘Don’t dream it, be it,'” Curry said. “Which was a really good slogan.” Sarandon added, “I’ve had so many people come up to me and say that film helped them through a dark time.”

Below, watch the full interview.