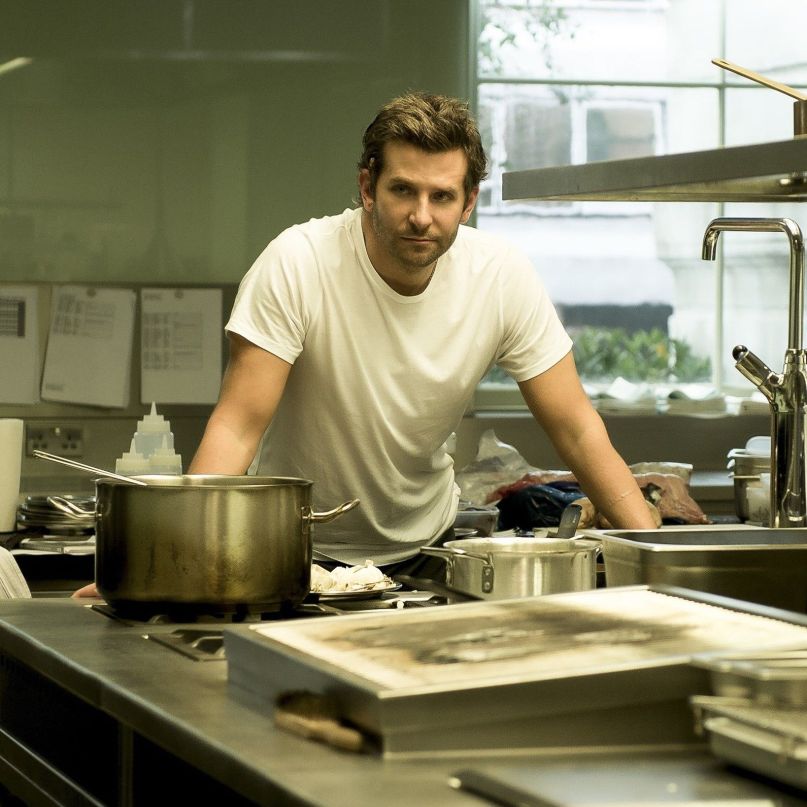 It’s telling that the most accurate and insightful moment in the haute cuisine drama Burnt takes place inside a Burger King.

Unfortunately, this one nugget of genuinely fascinating insight about the food world is abandoned for a paint-by-numbers drama courtesy of John Wells (August: Osage County) and Steven Knight (Locke), both of whom have done better.

Burnt’s plot is everything you expect from the culinary equivalent of Birdman: rockstar chef Jones (Cooper), following a shameful spiral of drugs, alcohol, and personal bridge-burning, returns to London from a self-imposed sabbatical to earn his third Michelin star at the hotel restaurant of his old friend Tony (Daniel Brühl) — a last-ditch effort to restore and secure his reputation as the best chef in the world. Battling recovery with the help of Magical Wisdom Elder Emma Thompson, Jones assembles his team of new friends, old enemies, and a struggling single mother with chef potential (Miller) in order to achieve the perfection he so craves.

The kind of food being served in a film is a telling indicator of its mood: Just as Jon Favreau’s chirpy Chef embraced the quirky invention of the culinary food truck scene, Burnt drenches us in the stuffy, high-pressure world of Michelin-star restaurants. Unlike Chef, Burnt largely wastes its opportunity to show off its culinary chops: Adriano Goldman’s omnipresent deep-focus photography and Nick Moore’s overeager editing make it so we only get fleeting glimpses of Jones’ elegant, artistic dishes, crafted by food stylist Nicole Herft (whose job was so important she gets an opening credit). What little we see looks gorgeous, but Wells is too focused on Cooper’s tantrums to let us actually eat with our eyes. Instead of a meal, we get an unfulfilling amuse-bouche of Herft’s earnestly stunning work.

(Read: Lay Off Me, I’m Starving: The Tastiest Meals in Film History)

Cooper gets by on his natural charm, but the film has a frustrating inability to tap into the deep well of tragedy that Cooper desperately wants to evoke. One of Cooper’s earliest roles was as a fictionalized version of Anthony Bourdain on a short-lived sitcom version of Bourdain’s book Kitchen Confidential in the early 2000s. Both there and here, Cooper shouts, throws dishes, and plates food with aplomb, but there’s little meat to his presentation. Jones feels like a gumbo of all the abrasive celebrity chefs we all know – your Anthony Bourdains, your Gordon Ramseys – with some surface-level OCD and drug problems to spice up the proceedings. Suffice to say, what is fleetingly entertaining on Hell’s Kitchen becomes one-note when stretched out into a feature-length prestige film.

Surrounding Cooper is a Michelin-worthy cast forced to serve up cinematic Whoppers of their own: Brühl and Miller turn in fine work, but are stifled by their roles as Cooper’s safety net. Brühl ‘s unrequited yearning for Cooper (and Cooper’s awareness of it) is a highlight, but it’s played so far in the background that it’s hard to decide whether to appreciate the restraint of its execution or resent that it barely exists. The same goes for Thompson, whose natural charm is wasted on scenes which openly state Jones’ internal conflicts. For a film about Cooper needing to learn to treat his staff like family instead of “tools,” the other chefs get short shrift: their subplots happen in the background, out of focus while Cooper mopes in his leather jacket and sunglasses. Even Uma Thurman’s snobby food critic only shows up for two scenes and disappears from the film.

Food and film go hand in hand – immensely visual and occasionally transcendent experiences, the art of cooking and the aesthetic pleasures of a really good meal are subjects tragically underserved in feature film. Usually relegated to obscure arthouse fare like Big Night, Jeanne Dielman, or Babette’s Feast, or mouth-watering documentaries like Jiro Dreams of Sushi, the culinary arts are often invisible onscreen, outside of the Food Network. While Burnt tries to offer a higher-profile, Weinstein-backed exploration of such an innately cinematic subject, its tepid drama and low stakes won’t make you stay for dessert.