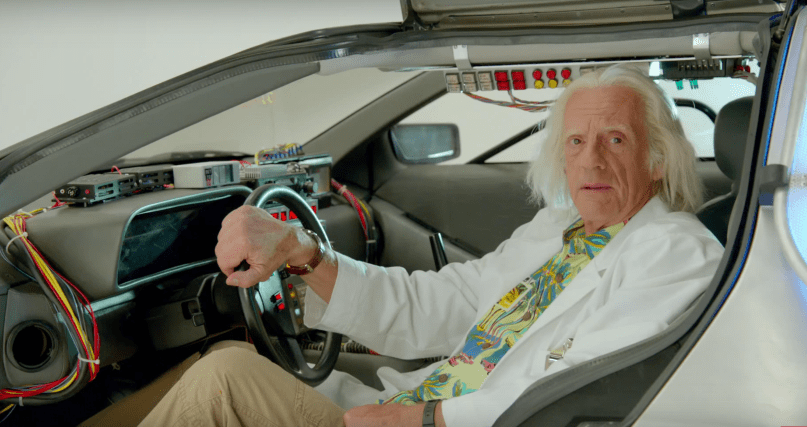 Today is the day! October 21st, 2015 is the exact day that Marty McFly arrives in the future in Back to the Future II. In a fictionally literal way, the future is now! It’s a moment istodaythedaymartymcflyarriveswhenhetravelstothefuture.com has been waiting for for years, and one they’re celebrating in a big way.

For the first time, the website reads “Yes!”, and it comes with a special message from Doc Brown himself, Christopher Lloyd. Lloyd and Michael J. Fox have already talked about what the film got right, but now Doc has some words for those who might be a bit let down by the lack of clean fuels or hoverboards. Remember, the future is yours to write!

Check out the once-in-an-eternity video below.

(Read: A Chronological History of Back to the Future’s Technology)

The countdown website’s creator, Richard Haderer, is commemorating the day by donating to charity. Like Fox, Haderer’s mother suffers from Parkinson’s disease, so every cent earned by visits to his website today will be donated to The Parkinson’s Foundation Austria. You can also donate directly by visiting the site, so head there now.

In more Back to the Future Day celebration, Lloyd, Fox, and Lea Thompson stopped by Today to discuss the film’s legacy. They reflected on their first time reading the script, the onset chemistry, and of course, the predictions. Watch the interview below.

BTTFD is big news everywhere, and that includes USA Today. As AdWeek points out, the newspaper will wrap the Thursday edition of its print newspaper in a cover pulled directly from the 1989 classic. In the film, the cover is the inciting incident that sends Marty and Doc to 2015, as the October 22nd paper depicts the arrest of Martin McFly Junior.

While the top half will be recreated directly from the movie (including headlines like “Jaws Without Bite is the review of Jaws 19″ and “Woman Asphyxiates in Self Adjusting Jacket,” with even the logo matching the film), the bottom half was never seen on screen. Therefore, Universal and writer/director Bob Gale teamed up with USA to create new articles, including one announcing the remake of George McFly’s novel A Match Made in Space, and a headline reading “Public more gullible than ever.”

Take a look at the cover below.

Even the town of Reston, Virginia is commemorating Back to the Future II. To coincide with the Washington West Film Festival, the town has temporarily changed its name to Hill Valley. The entire trilogy is screening at the town’s Bow Tie Cinemas tonight, and the name change will remain in effect until the festival’s close on October 27th. On Sunday, Llyod, Wells, and Gale will be on hand for the festival’s sold-out screening of the original Back to the Future.