together PANGEA – The Phage EP 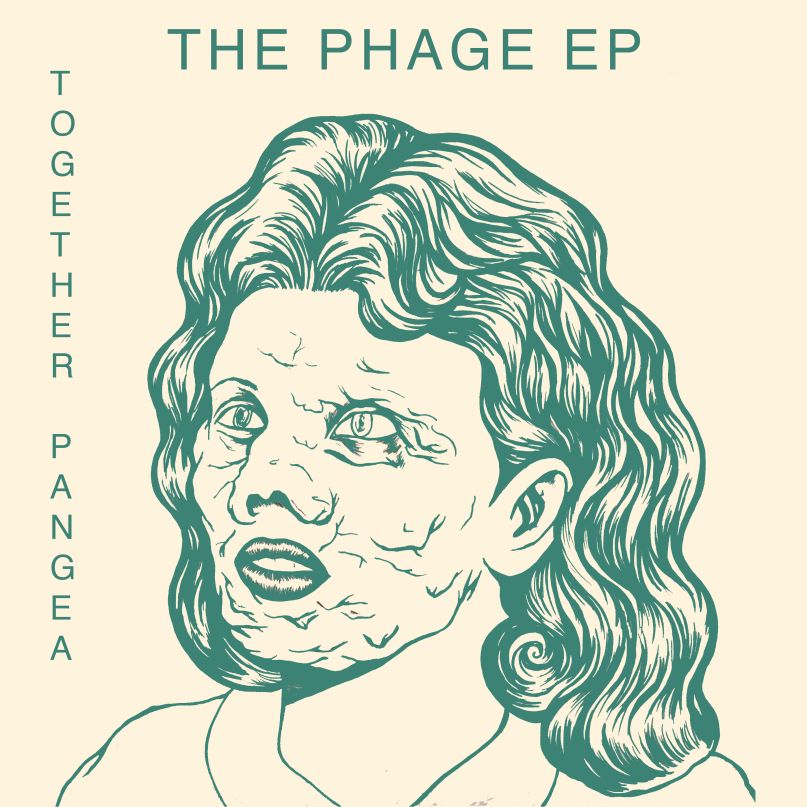 My introduction to together PANGEA came at a sweaty house show in Davis, CA, a couple of years before garage punk became de rigueur in the DIY scene and you couldn’t throw a Big Muff without hitting another Big Muff. The show was sweaty because it was summer, not because a ton of people showed up to contribute $5 and some body heat. But a living room half-filled with listless college students felt like the perfect place to get acquainted with frontman William Keegan’s angsty howl. It still does.

Listening to the band’s new six-song EP, The Phage, has made me realize that just one introduction isn’t adequate for together PANGEA. In the half-decade since that night, Keegan and co. have released three albums, added an extra word to their name, and distanced themselves from the feral, lo-fi punk of their early days in the Griznar Music Collective. Suffice it to say the band that released 2014’s Badillac felt like strangers to me.

Considering the glorious contradictions of that album, they probably felt a little strange to themselves, too. The whole spectrum of human emotion shines across various points of Badillac’s 33 minutes; there’s swagger and there’s navel-gazing, there’s giving no fucks and there’s giving so many fucks you lose track. Our own Michael Roffman described it as “one of those rare listens where you think, Okay, I get this … and I think it gets me,” but I’m more inclined to say it’s an album that doesn’t even get itself. And, like most 20-somethings I know, it’s all the better for it.

In some ways, The Phage sounds even less stable than its full-length predecessor. The band has spent the better part of the year on the road, and Keegan’s description of the word “phage” suggests that all those miles have taken a toll on their collective brain chemistry. “It’s essentially cabin fever,” he explains, “whether it be a cabin or a tour van that you’re trapped in for months.” Indeed, there is something manic about the EP, both on a song-to-song level and when taken as a whole.

“Looked in Too” kicks things off with a strutting guitar riff that would fit right in at an early ’70s beach party. Yet, there’s tension burning beneath all those layers of sunscreen, most of it emanating from the play between Keegan’s nervous delivery and the locked-in groove held down by bassist Danny Bengston. In any case, together PANGEA has never sound more musically confident than they do here. There’s nothing sloppy about this EP, though there are various, conflicting ways to interpret its neatness.

If you mean to interpret it as a sign of growth or maturity, there’s some truth to that. Keegan has previously demonstrated an aptitude for writing pop melodies, but the band is also learning how to record in ways that accentuate those melodies and push them to a more radio-friendly stratosphere. Here, they’re aided by their producer, The Replacements’ Tommy Stinson, who knows a thing or two about transitioning from house shows to the Big Time. Stinson doesn’t do anything to rub out the band’s personality, but he does add polish and clear out space for the kind of power pop flourishes that defined his own band’s latter years. The guitar solo in “If You’re Scared” is a good example of this, as is the hand-clap chorus of “My Head Is on Too Tight”, a song that cares more about being danceable than cerebral.

The EP’s four-and-a-half-minute centerpiece, “Blue Mirror”, is probably the best thing together PANGEA has recorded to date. It’s telling that the song is also the furthest the band have ever ventured from their native punk habitat, driven by a clean guitar lead that slips across the higher frets and only lets up during a brief, understated chorus. Keegan contributes some of his finest vocal work here; the hook you’ll probably remember most when you walk away from Phage isn’t necessarily a hook at all, but his delicious enunciation of “You planned it all, goddamn it.” Then again, there’s also the harmonizing oohs of “Awful”, the electric freakout at the end of “She’s a Queen”, and about a dozen other sticky moments that continue to wiggle themselves into my ear at various times throughout the day. I wouldn’t be surprised if this holds true for the rest of the year.

I suppose that’s the thing about this latest iteration of together PANGEA. They may never again be the kind of band a person stumbles upon by chance in a half-empty living room, and maybe a certain magic is lost with that. But these guys are putting together a whole different kind of magic these days, and I look forward to meeting them all over again the next time around.