This year has been kind to concertgoers, and it's only getting better

by Philip Cosores and CoS Staff 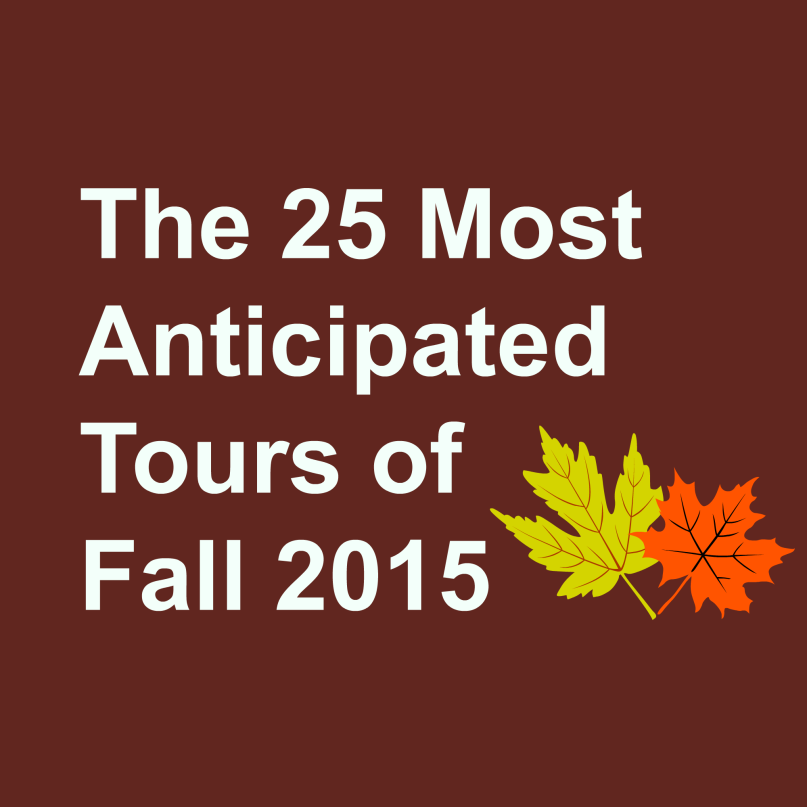 We’ve already had a stellar year for concerts. Just a few months ago, we were anticipating Lollapalooza and Bonnaroo, eagerly awaiting arena tours from Foo Fighters, The Who, and Madonna, and wondering whether Alabama Shakes and D’Angelo would continue to deliver on the live performances they had come to be known for. Yeah, we had a pretty great spring and summer for music, but the year is not over yet.

It’s important to note that all of those arena tours have yet to wrap up, and a few major festivals, like ACL, Fun Fun Fun Fest, and Treasure Island, all remain. Special appearances, like Kanye West performing 808s & Heartbreak, also highlight the docket. Plus, there are sure to be a few more late-year runs still to be announced. What’s already been revealed has us all excited to cover live music for the next few months, especially these 25 tours we put at the top of our must-see list.

Stevie Wonder played The Taste of Chicago 2008 in Grant Park as a free event for all the hot dog-hounding denizens of the city. You’d think that music would be the last thing on the minds of folks in meat comas, but sure enough, Stevie’s park showing, his presence and bodacious sound, meted out singing, dancing, and a general sense of wowed appreciation for the legend letting it out. That’s just how good Stevie still can be. So imagine how groovy he might be if you pay to see him. OK, that sounded a little cynical, but come on, his Songs in the Key of Life Tour added 20 extra North American tour dates this past August. The hot tour was a full run of his famous ’76 double LP, and it’s carrying on from September 30th to November 24th, closing out with a big show at Madison Square Garden. —Blake Goble

Ever since FIDLAR rose to prominence in their native Los Angeles, the punks have been known for their raucous live shows, which, in their early days, would often get so out of hand that the police would break them up. While they’ve certainly done some growing up since releasing their self-titled debut all the way to their recent Too (if you haven’t already, check out the CoS cover story on the band, which delves into frontman Zac Carper getting sober), that hasn’t sapped any energy out of their gigs. FIDLAR’s young fanbase shows up early and in force, and with the official release of rowdy tracks like “40oz. on Repeat”, “West Coast”, and “Sober”, expect as many mosh pits and boisterous sing-alongs as ever. —Killian Young

Questionable choice of headwear aside, the announcement last November that ‘90s shoegaze pioneers Ride would be reuniting for the first time since breaking up in 1996 left many excited on this side of the pond as well as in the band’s native UK. After playing festivals like Coachella and a few one-off shows, Ride is set to embark this fall on a full US tour, giving the whole country a chance to hear the classics again. While not every reunion is executed as well as it sounds in theory, reports from the band’s spring festival appearances were glowing, indicating that Andy Bell and co. haven’t become too rusty in almost two decades away. Contemporaries such as Besnard Lakes and DIIV, who are set to release their sophomore album this fall, will open select dates on the tour. Reunion tours like this often draw skepticism, but the chance to see one of the most influential bands of the ‘90s again should not be missed. —David Sackllah

* with DIIV
# with Besnard Lakes

Yo La Tengo has been a three-piece band for the vast majority of its existence, but on their 1986 debut LP, Ride the Tiger, they had a second guitarist by the name of Dave Schramm. Schramm has since appeared with the band on rare occasions – including on Fakebook, Yo La Tengo’s 1990 precedent to the half-original-half-covers Stuff Like That There – but their current tour behind Stuff will feature him back on lead guitar regularly for the first time since the early days, executing the extra delicate solos brought into play on the new record. See their recent CBS Sunday Morning spin on “Automatic Doom” by their fellow Hoboken band The Special Pillow for an idea of just how delicate those solos can get. —Steven Arroyo

HEALTH has long earned a reputation as a pulverizing live act, but with the LA group’s new album, Death Magic, the band has created music that is less esoteric, with bigger hooks and a softer edge. At FYF Fest, HEALTH leaped around the stage, shouted manically, and created an overall chaotic spectacle, proving that the resulting live show still manages the intensity and force of their previous output, just with some songs with pop backbones thrown in. HEALTH is more well-rounded now, providing pleasures from varying sources, and giving a good reason why they jumped to a major label for their newest album. —Philip Cosores

Next
Mystery Mask Multi-Packs Now 50% Off
Introducing the Newest CBD Flower Strains
The Legacy of 2Pac's All Eyez on Me 25 Years Later
Once a Meme, Now a Benefit T-Shirt for Music Crews