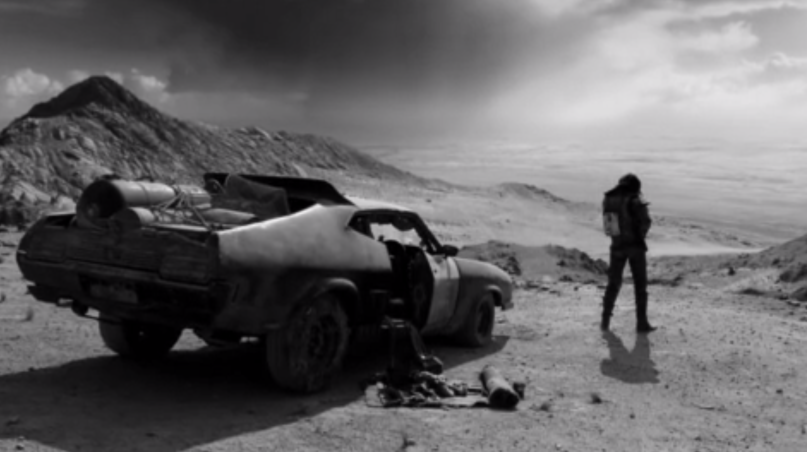 Back in May, director George Miller unleashed one of the most breathtaking action films to hit theaters in decades, if not ever according to Film Editor Justin Gerber. A full-on spectacle of practical effects, jaw-dropping stunts, brilliantly stoic performances, and prescient themes, there’s little debate that Mad Max: Fury Road is a sweeping masterpiece amongst a post-Empire wasteland of cinema.

Only what we saw was not what Miller intended. In an interview earlier this summer with Edgar Wright, the filmmaker expressed his mild disappointment that he couldn’t exactly produce the vision he worked up in his head. Here’s his full quote:

One thing I’ve noticed is that the default position for everyone is to de-saturate post-apocalyptic movies. There’s only two ways to go, make them black and white — the best version of this movie is black and white, but people reserve that for art movies now. The other version is to really go all-out on the color. The usual teal and orange thing? That’s all the colors we had to work with. The desert’s orange and the sky is teal, and we either could de-saturate it, or crank it up, to differentiate the movie. Plus, it can get really tiring watching this dull, de-saturated color, unless you go all the way out and make it black and white.

It was previously reported that Miller demanded a black and white version for the film’s accompanying Blu-Ray release and, well, that never happened. So, naturally, some good ol’ War Boy named Nux did the dirty work, nixing the color and the dialogue, and uploaded the whole thing to Vimeo. Check it out below before Warner Bros’ own Immortan Joe finds out and demands it to be slaughtered immediately.

Update: The video has been removed.