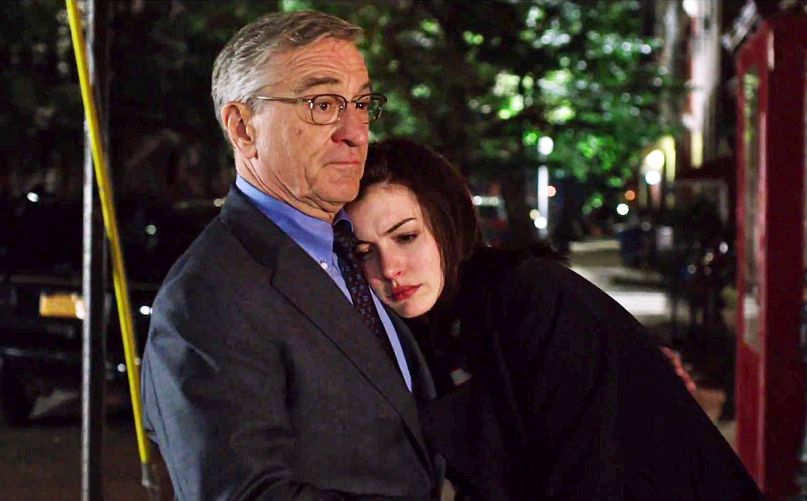 Here’s your quick-take review. Speed test: Does the thought of a wandering Robert De Niro looking in the mirror and practicing office greetings in the style of Taxi Driver make you blanch? If so, The Intern ain’t your bag. That’s fine. Move on. Read no more. This is a Nancy Meyers film, and that requires certain concessions and an acceptance of the cornball. But if De Niro’s latter-day mugging amuses you, well, check this out.

Nancy Meyers, the maven of the upper middle-age romcom, has now cruised ever so casually into senior-itis with The Intern. It’s a typical Meyers joint: breezy farce with touches of honey and commerciality. It begs to be watched on a cozy couch with custom-knit blankets. Yes, Meyers is still playing with the financially and decoratively blessed as always, but now she’s added pill boxes for each day of the week and running gags about funerals. To be clear, it’s still Meyers’ bag. Her very trendy, expensive bag endorsed by only the finest celebrities. And as always, the styles on hand could make the cover of Elle.

Robert De Niro is Ben, a 70-year-old widower in Brooklyn. He worked in phone books for years and now has nothing left but his fabulously furnished brownstone, complete with an electronic tie rack, perpetually sun-drenched natural lighting, and voluminous throw pillows (oh you, Meyers). De Niro looks like he’s in pain, and we’re not just talking about the constipation De Niro always assumes when he’s asked to tightly smile and loosen up for laughs. Riding the line between sincerity and austerity, Ben’s a shy, polite, and sort of wound-up old man. He goes to Starbucks just to feel like he’s near people.

As such, Ben begins working at a start-up e-commerce clothing company as a septuagenarian intern. Imagine, if you will, De Niro in a mannered, disciplined, and professional mode. Then think of him surrounded by shabby, hapless Millennials and constant lines of iMacs. Cute, right? The Intern’s all about the amusement of contrast, the modern and the vintage finding comically common ground.

Enter the enthusiastic Anne Hathaway as Jules, the lithe and aloof fashionista who founded the start-up company. She’s in disrepair, yet a total luminary. Jules is a working mom, struggling to have it all her way. And she’s a burdensome boss, too passionate for her work, perceived as a flake by some. Ben’s been assigned to her.

From a narrative standpoint, the odd couple premise exists to staple together a series of subplots. Events occur at random for five to 15 minutes at a time, with speedy resolutions. Jules is asked to consider stepping aside in favor of a seasoned CEO. There’s possible trouble brewing at home with Jules’ house husband, Matt (Anders Holm). Ben strikes up a fling with a corporate masseuse (Rene Russo). Ben even gets into an Ocean’s Eleven­-esque caper, complete with David Holmes’ score from that film, played to excitable effect. Everything happens in that outrageous, lavish Nancy Meyers gift bag universe, where parking is always available in Brooklyn and everybody exists to look good and quip all the time.

Meyers could’ve potentially benefited from another re-write and tightening. Intern doesn’t flow; it chops. But, herky-jerky pacing aside, scenes, for the most part, get put on with a pleasant smile. She can still get a big laugh when she wants, while dressing her characters up and down at the right times.

The Intern isn’t a defense of Baby Boomers and the wisdom of age. It isn’t really a work of empowering feminism either. Hathaway and De Niro are just working to meet in the middle. Yet, by the end of the film, once you get into the film’s goofs on age differences and its Williams & Sonoma-baiting (which is nice, even comforting side material in Meyers’ films by now), The Intern’s basic, gentle conceit emerges: friendships can exist despite expectations and circumstances. Hathaway and De Niro are funny with each other, and they respect each other as well. You will believe a white-haired ex-VP and a Gilt-like fashion whiz can hang out platonically and with reward.