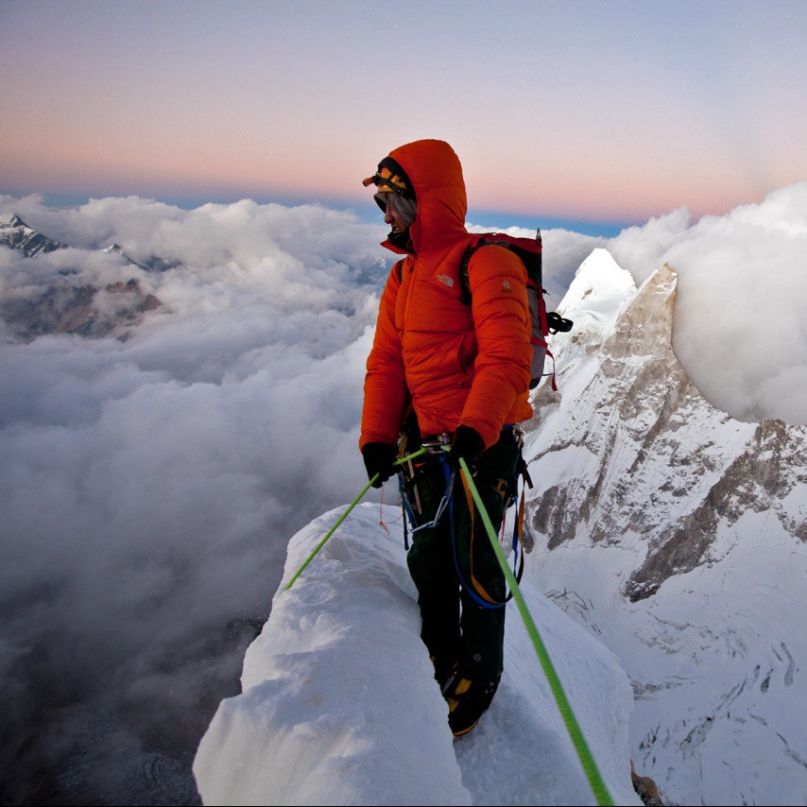 From Touching the Void to Cliffhanger to (God help me) Vertical Limit, mountain climbing has been firmly established as an eminently cinematic activity. Few genres offer such an intriguing combination of beautiful, natural imagery and death-defying danger, with impressively brave souls risking life and limb just to do what few humans dare – reaching the ceiling of the world. While we’ve heard of Everest and K2, the most challenging climb in human history to date is India’s Mount Meru, a 21,000-foot behemoth topped by a smooth, unyielding blade known colloquially as the “Shark’s Fin.” This is the setting of Meru, a documentary combining some of the most eye-popping nature photography in years with a compelling human story at its core.

Meru, directed by Jimmy Chin (along with wife Elizabeth Chai Vasarhelyi), tells the decade-long tale of three men – veteran climber Conrad Anker, Chin, and newcomer Renan Ozturk – who attempt to conquer Meru, fail, and then actually decide to go back. Meru’s structure is as meticulously constructed and disciplined as the climber’s equipment, weaving mostly effortlessly between the human-interest elements of the story (Conrad’s wife is worried! Renan has a dog!) and the sublime vistas of Meru Peak (there are no words). Weirdly enough, the film’s greatest drama comes not during the two Meru climbs that sandwich the film, but the tragedies that befall the men in between their first failed attempt and their second go-round. In the intervening years, two of the climbers suffer life-threatening accidents on other excursions, and the other loses a dear friend in an avalanche. As the film draws to their climactic return to Meru, their decision seems as much an exorcism of their demons as it is another grasp for greatness.

While the mountain is the true star of the film, Chin and Vasarhelyi use its supreme height and majesty to reflect the lives and motivations of this dynamic cast of characters. Anker, all chiseled jaw and silent reflection (looking kind of like a handsome Andy Daly), is the experienced climbing legend, a man haunted both by his obligations to his family and his instinctual pull to keep climbing. Chin is the young, motivated mentee, just practiced enough to climb smart while carrying his fair share of responsibility. Renan, the least experienced and most reckless, is the weak link of the group, but his ambition comes across as a charmingly unpracticed hubris. This dynamic gives Meru a compelling cross-section of the types of personalities that pour themselves, heart and soul, into this particularly dangerous yet highly rewarding sport. We see the trio as the kind of aw-shucks pragmatists who know what they’re doing and reckless risk-takers who (as their family opines in interview footage) really shouldn’t be risking life and limb. Meru has the intelligence to let them be both of these things in equal measure.

The everyday struggles of both weeks-long climbs helpfully fill the time in Meru in unexpected ways. With every climb, Anker and crew must constantly make the complex set of mental calculations involved in surviving and accomplishing their goals – rationing food, making calculated risks, assessing the health and mental state of other climbers. The sheer level of preparation and constant improvisation required of climbers is a major focus of Meru. On top of that is the mountain itself: Blinding snowstorms, rolling peaks, and sub-zero temperatures test the patience and health of the climbers at every turn, even as Chin’s footage takes us thousands of feet in the air right along with them.

Where Meru excels most is in the immediate, nail-biting thrills of climbing Meru Peak – called “The anti-Everest” – and the deeply felt connection these three men have to each other as fellow climbers. Granted, the human interest elements of the film can teeter dangerously toward self-aggrandizement (Into Thin Air author Jon Krakauer appearing throughout to wax philosophical about the virtue – and insanity – of climbers), and one particularly unfortunate music choice lends a Levi’s-ad feel to an otherwise-inspiring late scene. Still, Meru leavens these minor mistakes with sheer force of will and filmmaking craft, leaving you with a greater appreciation for the challenges of nature and the type of men who rise to meet them.