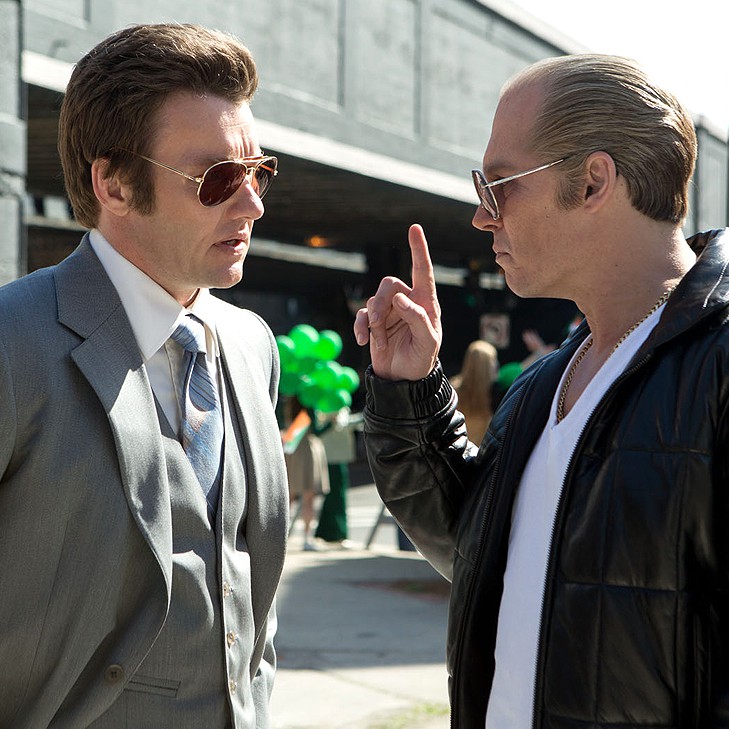 Director Scott Cooper wants Black Mass to be a lot of things: a crime thriller, a crime drama, a tragic meditation on brotherhood, a cautionary tale of deception, a searing parable on American justice, a brutal portrait of masculinity, and perhaps even a love letter to Boston. OK, maybe not that last part. Instead, what the highly anticipated true story of James “Whitey” Bulger boils down to here is what we’ve pretty much known it to be all along: a glossy stage for Johnny Depp’s big comeback.

To be fair, this is one hell of a return for Depp. After prancing from one fantastical role to another, as though he lost a crummy bet to Tim Burton sometime in the mid ’90s (or just really, really enjoyed the piles of cash Bruckheimer and Disney threw at him for Pirates), it’s a relief to see the veteran so alive, so visceral, and so overwhelming. Not since 2001’s Blow, or better yet, 1998’s Fear and Loathing in Las Vegas, has he taken a film and run away with it like this.

As Bulger, Depp rips off his good looks, slinks into tight denim, clutches his leather jacket, and rules every street, bar, household, and blood-stained vehicle he graces. The vitriol and hate behind his eerie ocean eyes reminds us why he’s responsible for close to $8 billion of worldwide box office dollars before blowing our brains out to forget. You’ve likely seen him in ads, specifically that anxious teaser from a few months ago, but to watch him roll for 122 minutes … it’s a thing.

That “thing” has haunted Hollywood for decades — Brando in The Godfather; De Niro in Raging Bull; Charlize Theron in Monster; Rooney Mara in The Girl with the Dragon Tattoo; Heath Ledger in The Dark Knight; nearly everything Tilda Swinton has ever signed on for — and yet it’s something Depp has accomplished at least three instances prior. At times, it’s what has brought us to watch the film (Edward Scissorhands), but often we’ve been surprised by it (Donnie Brasco).

With regard to Black Mass, Depp is the ticket, and sadly, that’s about it. For his third feature film to date, Cooper tackles a forgettable, exposition-laden screenplay by Jez Butterworth and Mark Mallouk. Blame it on ambition, but the two attempted to capture the unbelievable, decades-spanning story of the infamous Irish-American mobster Bulger, who reigned over South Boston while serving as an FBI informant for 30 years, taking down the Italian mob before fleeing for two more decades.

It’s the type of exhaustive story that demands Martin Scorsese’s stylistic eye and William Monahan’s economical storytelling, but those two only paid spiritual homage to Bulger when they carved out 2006’s The Departed. The problem is that Bulger’s story is far too complex and meandering to be contained in a simple two-hour film, especially one that sweats, heaves, and eventually wheezes to toss out the little details.

(Read: The 10 Most Shocking Mob Hits in Film History)

Even with multiple on-screen testimonials, which eventually dissolve into liberally used voice-overs, Butterworth and Mallouk flood the film with half-baked dialogue that splatters each scene with the transparent essentials. It’s intoxicating, but worse, it adds a septic quality to the proceedings, restricting the characters from becoming anything more than archetypes, especially the women (Dakota Johnson, Julianne Nicholson, and Juno Temple) who appear for frugal use.

Cooper, who shined with 2009’s Crazy Heart and stumbled with 2013’s Out of the Furnace, adds very little to the crime genre with an uninspiring vision that tends to crib too much from Goodfellas. His devotion to the nostalgic Boston scenery is commendable, but it doesn’t have the spark or heart that we’ve seen in, say, anything Ben Affleck has put on film in more recent memory. That’s a shame, too, given that Affleck originally intended to try his hand at Bulger’s story with Matt Damon.

Still, there’s Depp and the inventive cast he’s spun around. Joel Edgerton, in what seems like his 20th role in the last year, injects some much-needed humor as the all-too-bumbling John Connolly. Jesse Plemons walks further away from his Landry Clarke days. Rory Cochrane remains a Hollywood underdog with another nuanced supporting role. A seemingly confused Benedict Cumberbatch sighs with elegant brotherly love. And Nicholson does her best with the little she’s offered.

The rest of the cast plays out like a Who’s Who of Hollywood, with appearances by Corey Stoll, Peter Sarsgaard, Kevin Bacon, W. Earl Brown, Adam Scott, and it goes on like that. Sienna Miller, who filmed her scenes as Bulger’s fugitive companion Catherine Greig, was cut altogether (Foxcatcher, anyone?), further illustrating the narrative difficulties of this story. Nevertheless, it would be interesting to see the footage, as those scenes might actually carve a stronger image of Bulger.

Because that’s certainly not what Black Mass accomplishes. Sure, Depp goes HAM with this performance and will likely be responsible for an up-sale in Ray-Ban’s Acetate Aviators, but the film’s screenplay, even though it tries, doesn’t really allow him to go deeper than the cold-hearted killing machine we came in expecting. Midway through, Butterworth and Mallouk attempt to rationalize his hard exterior by simply pointing to his past losses — once more with an egregious slice of exposition.

These narrative shortcuts add up fast and eventually undermine every relationship Bulger supposedly has on screen, whether it’s with his senatorial yet caring brother, his longtime family friend in Connolly, the beloved son he loses, the tearful girlfriend he dismisses, the rambunctious mother who pops up maybe once, and even the most prominent members of his Winter Hill Gang. These limitations strangle Black Mass from being anything more than a lively, breezy Wikipedia entry.

Stronger films have captured the essence of Bulger — for those interested, seek out Joe Berlinger’s fantastic documentary from last year, Whitey: United States of America v. James J. Bulger — but very few films of late have been strong enough to capture the essence of Depp. For that, we should simply appreciate what Black Mass does offer: a struggling veteran refusing to punch in and roll with the punches. Surely that’s something Bulger could relate to, no?