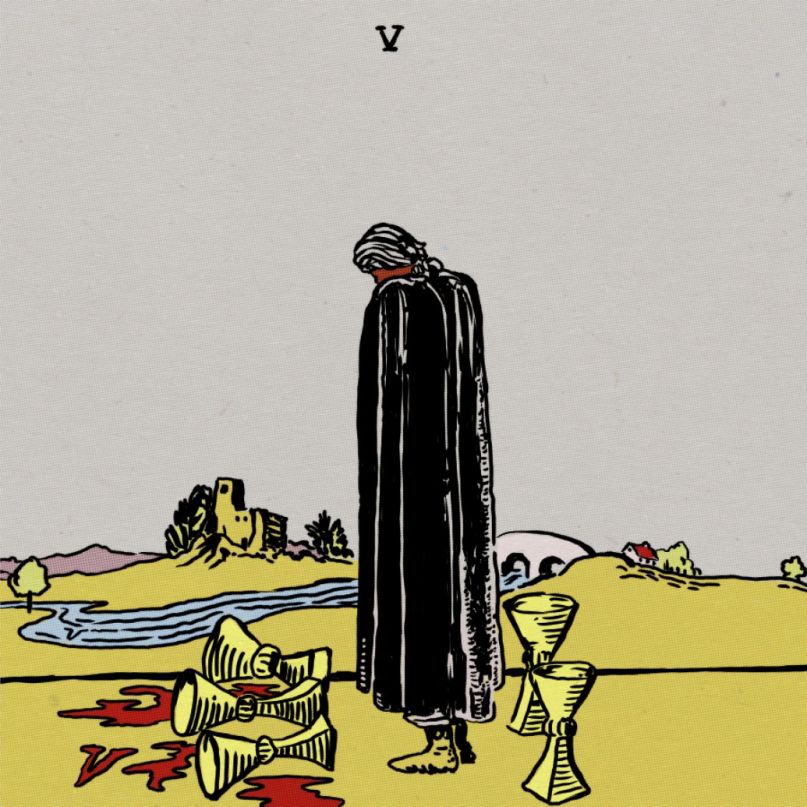 Somebody get Nathan Williams a bottle of Advil. Wavves’ wild-eyed frontman has a raging headache, and it’s all he can sing about on his band’s fifth album, V.

When we last saw Williams, he was a little less manic and a little more melancholy, though the latter probably had something to do with Cloud Nothings’ Dylan Baldi. In June, Williams and Baldi released the collaborative No Life for Me, a lean, nine-song set that sounds like a tug-of-war between Williams’ SoCal slacker punk and Baldi’s Midwest lethargy. That album was a low-key, low-stakes affair uniquely suited to those quiet summer moments when you’re sweating off a hangover on the couch or driving through hills at night with the windows down.

By contrast, this album feels visceral and downright volatile. It plays like the soundtrack to Williams losing his mind, its sunny exterior clouded by constant declarations of hopelessness and flat-out cries for help. Warner Bros., the major label that took a chance on Wavves after the band’s considerable indie success, will certainly be pleased to hear that the hooks haven’t abandoned Williams in his time of stress. If anything, his melodies are as muscular as they’ve ever been. This is a welcome reversal, as Wavves had been on a slight downward trajectory since the literal and figurative high of 2010’s King of the Beach. With V, Williams reasserts his status as one of pop punk’s preeminent songwriters, even if this version of pop punk has more in common with Black Flag on Nervous Breakdown than with Blink-182.

(Watch: We Interviewed Wavves and it was an Unmitigated Disaster)

From an evolutionary standpoint, this actually makes sense. In the ’90s and early ’00s, SoCal was recast as a bizarro punk paradise thanks to bands like Blink, with their goofball antics and lyrical details of high school relationships. Look back another decade, and you’ll find something much darker and more ambivalent — Orange County’s Adolescents describing themselves as “Kids of the Black Hole” or Bad Religion asking How Could Hell Be Any Worse?. Bands like Wavves and FIDLAR have rediscovered this tradition and aligned themselves with it, preaching the same gospel of nihilism and substance abuse, adapted to a different age.

V springs from this tradition and, as such, it’s not without its contradictions. These 11 songs are a lot of fun to listen to, even if they’re not about having fun. Williams has never been shy about his love for weed, but here he sounds like he’s on a bad trip and can’t get out of the car. “Have I lived too long? Why does my head hurt?” he asks on opener “Heavy Metal Detox”, despite the fact that he’s not yet 30 and has always presented himself as someone with his head in the clouds. The music itself is anthemic, even triumphant, but it clashes with the self-doubt implied by those two questions. Even the assertion of “we’re not alone” in the song’s bridge rings hollow, as if Williams can’t quite bring himself to believe what he’s saying. A similar moment occurs in “Pony”, a sunshiny surf punk gem that’s destined to fuel countless pool parties. “It gets better,” Williams promises in the chorus, only to betray his self-doubt in the following line: “It better.”

Can you have a blast as you’re going insane? Apparently you can — it’s the tension that propels V forward. Sometimes, as on the breezy “All the Same”, Williams playfully shrugs off his frayed nerves, while on songs like “Redlead” the band employs pounding bass lines and start-stop melodies to imply something more sinister. Every song on the album contains some mention of mental instability, whether it’s in the form of a migraine, grinding teeth, or some other cerebral affliction. The darkest tracks even dabble with a bit of David Cronenberg body horror, whether implied in the song title (“Tarantula”) or referenced directly in the chorus (the “nightmare eating out my eyes” in closer “Cry Baby”).

“Dark” is a relative term as far as Nathan Williams is concerned. The guy may have self-destructive tendencies, but like Jay Reatard and others, he’s willing to sink in a sea of bubblegum melodies. V is a self-assured record penned by a songwriter who’s anything but sure of himself, and that dynamic shines right through the curtain of fuzz.