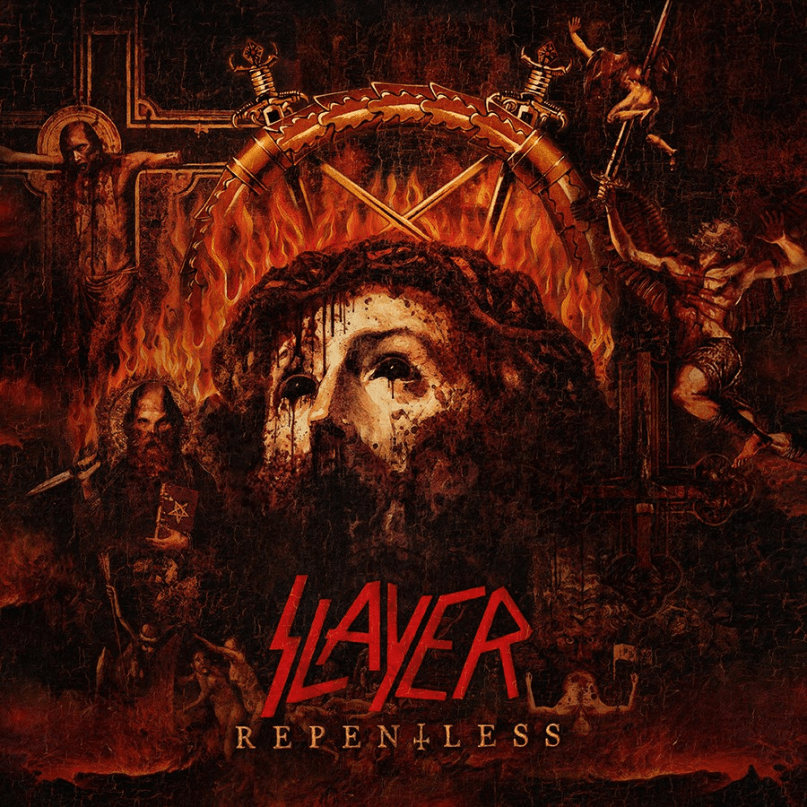 The loss of Jeff Hanneman in 2013 was devastating to the music world. The riffs he crafted with Slayer helped form an entire genre. Thrash took all the energy and rebellion of Iron Maiden and Judas Priest and channeled it into pure rage. Furious riffs and merciless double bass drums set the world ablaze, and Slayer, along with Metallica, Anthrax, and Megadeth, found themselves at the forefront. Thirty-two years into their career, they found enough rage to record 10 albums and become rock gods in the eyes of metal fans across the world. And then, in the midst of writing their 11th album, Hanneman died of liver failure. The band would continue, but it wouldn’t be the same. “After 30 years, it would literally be like starting over,” said vocalist/bassist Tom Araya in an interview with Blabbermouth. “To move forward without Jeff just wouldn’t be the same, and I’m not sure the fans would be so accepting of that drastic a change.” Willing to accept it or not, fans and curious listeners alike are about to be on the receiving end of one hell of an assault.

Not wanting to lose momentum, they brought on Gary Holt, the guitarist for Exodus and one of Hanneman’s longtime friends, to play opposite Kerry King. They also welcomed the return of drummer Paul Bostaph for the third time after Dave Lombardo’s firing in 2013. Along with producer Terry Date, the band went into the studio in January of 2014, ready with two fully recorded tracks and one partially written song left behind by Hanneman, and just let loose all the fury and frustration against the circumstances that nearly ended Slayer as we know it. The result, Repentless, is an album with a title that’s “made up, but everyone understands,” according to Araya, and a cover so blasphemous it could only have come from Slayer.

King and Holt’s riffs are fierce and unforgiving throughout, and their steel-clad partnership carries the entire album. “Take Control” begins blisteringly fast, and the song is kept precisely on track with each and every tempo shift by their masterful guitar work. “You Against You” features a pair of wildfire solos that set the album alight. Bostaph’s 12-year absence is easily forgotten as he helms the drums with a stunning level of skill. His shining moment arrives early in the album on “Cast the First Stone”, which finds him seamlessly shifting between a dominant barrage of double bass and hi-hats to marching along with every step of King and Holt’s riffs. Araya’s vocals, while having gained some gruff with age, still underline the unbridled misanthropic rage that has fueled the band all these years.

The incendiary wrath on display here, so unapologetic and infectious, makes this album undoubtedly Slayer’s. “Vices” celebrates violence as humanity’s greatest release; “A little violence is the ultimate drug/ Let’s get high,” Araya notes. Lines like these are the reason Slayer is beloved. Frustration with a world rife with injustice can become so overwhelming (especially if we lose a friend too soon, as the band laments on the poignant “Chasing Death”) that sometimes expressing our innate aggression is the only way to find release. We find our inner beasts in the riffs and the drums and the primal screams and the thrash itself, even if it’s just for 40 minutes at a time. Here, we can let loose with little intention to apologize.