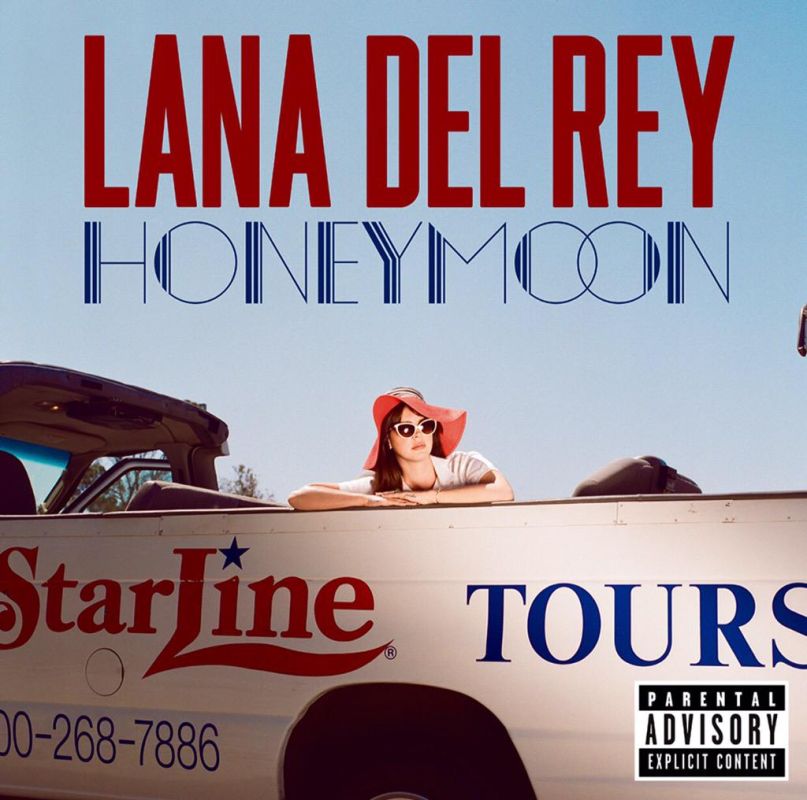 Lana Del Rey has moved through enough phases to complete her own full moon cycle. In 2011, she was the underground hit. In 2012, she was the SNL meme. In 2013, she was the forced fame starlet turned self-aware joke. In 2014, she was the darling about to break. Now, at last, she’s back to herself, whoever that self really is. What strings these all together isn’t necessarily that she’s changed, but rather that our projections onto her have. Honeymoon is the retreat Del Rey deserves, as press begins to wane ever so slightly. She’s still right in our faces as a model-like icon — the cover sees her looking down at presumably massive crowds through oversized sunglasses, her skin flawless and lips pouting with despondency. But she’s committed to an artful style, reveling in overblown ballads that vocally and musically sound more akin to what she was aiming for all along when “Video Games” first dropped.

Lana Del Rey’s first words on the album smirk ever so slightly: “We both know that it’s not fashionable to love me.” The title track is the ballad version of Taylor Swift’s “Shake It Off”: Both women beat critics to the punch, strolling ahead with armor already built to deflect the weapons thrown their way. There’s no guilt or embarrassment here. Del Rey is comfortable with the role she’s chosen to represent, no matter how melodramatic or cliched it may come across at this point in her career. She’s the sad girl who can’t be cheered up, no matter how glamorous her life may be.

“Honeymoon” is the first of many overblown numbers on the album — and that’s not a bad thing. Del Rey strolls into a dim light to croon with emotion so pure that it’s hard not to relate. Her voice engenders empathy and honesty as the chorus descends into eerie minor keys. More importantly, the song’s orchestration recalls the live scores for classic Hollywood films. While logically that should isolate modern listeners, it has a comfortable nostalgia for a simpler time most of her listeners never actually experienced. Sonically, “Salvatore” follows suit. The two-step crawls by like a number straight out of a resort hotel ballroom. Jazz drums cushion her words, the song’s production clean and rich without getting too gaudy.

Ultraviolence suggested that Del Rey sat in a world more shadowed than we, the listener, knew. Honeymoon takes that a step further by rolling in the lyrical drama and turning down the overall tempo. “God Knows I Tried” rocks with a country blues pace, “Art Deco” employs a lazy trap beat, and “Freak” clings to stuttering cymbals.

Honeymoon clocks in at over an hour; for a full-length of cinematic, defeated, slow songs, that length allows attention spans to drift off, possibly to somewhere happier — or even somewhere darker. Del Rey doesn’t seem to care. This is an endeavor for herself.

For all that solemnity, Del Rey still supports her penchant for twisted pop. “High By the Beach” fits right in with her “Diet Mtn Dew” days, stuffing a hook into your ears until you willingly hum it later that evening. “Music to Watch Boys to”, with its “‘Cause I like you a lot” refrain, could be a Born to Die B-side, but her recline into slower speeds takes the confidence that Born to Die faked.

Honeymoons are supposed to be the worry-free escape from reality, time to indulge in the comfort of love and luxury, but the specific terms vary widely based on whatever definitions the happy couple might have. For Lana Del Rey, that means embracing the beauty of longing, no matter how painful it gets. In her world, love can’t exist without loneliness. “I lost myself when I lost you/ But I still got jazz when I’ve got those blues,” she sings on “Terrence Loves You”. The song opens with isolated guitar notes plucked and dropped into the depth of a well, sinking into the distance as piano chords appear gently, then violins, and, at last, her wandering vocals. The chorus — a beautiful, operatic delivery about strength in the face of abandonment — manages to hold its own with self-confident volume. Even the brief saxophone sections inserted into the chorus and David Bowie references (“Ground control to Major Tom/ Can you hear me all night long?”) don’t cheapen her sentiment. Frankly, she sounds more at home stylistically on this album than on any of her previous releases.

It seems the world in which Lana Del Rey was meant to live in is that of the short-lived escape: romanticized strings, ballroom ballads, and that single, solitary tear drop when she stands up to soldier on with a broken heart, again, with hopes of one day taking a honeymoon for two.