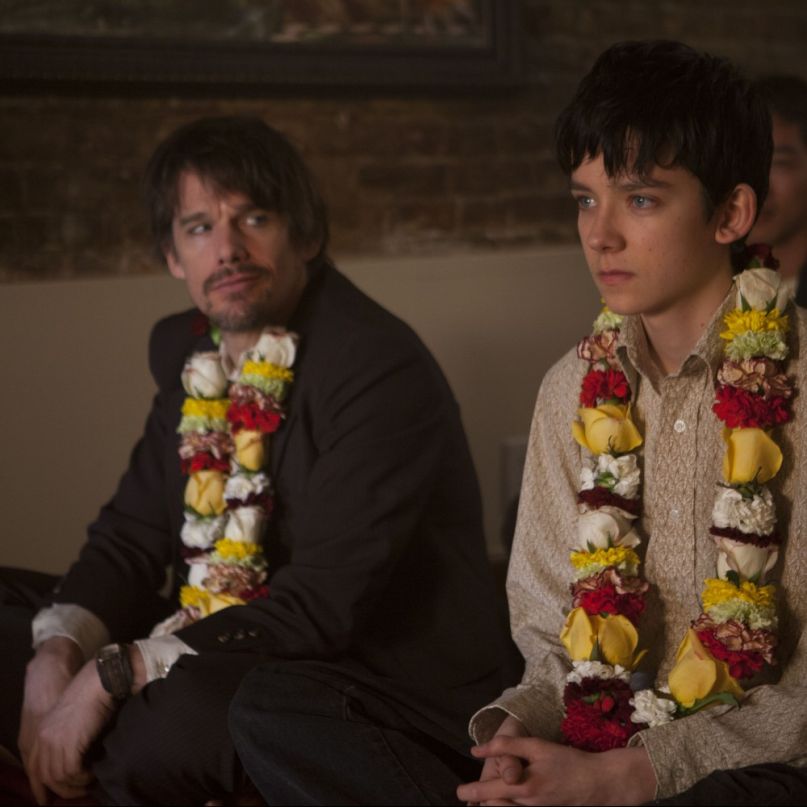 New York City wasn’t always a playground. Long before Disney took over Times Square and the yuppies invaded the East Side, the sprawling metropolis was once a seedy underbelly that embraced all walks of life. Artists, musicians, and writers shared the space with squatters, drug dealers, and thieves — there was a romantic sense of danger that informed much of the creative output at the time. You could die. Today, you’ll likely overpay for a cup of Joe.

In her 2011 novel, Ten Thousand Saints, author Eleanor Henderson pushed millions of readers out into those same city streets to experience the last gasp of a dying culture. Now, New York filmmakers Shari Springer Berman and Robert Pulcini (American Splendor) have brought the pages to life with a moving portrait of a time that doesn’t feel too far removed from today.

Set in 1987, the story follows teenager Jude Keffy-Horn (Asa Butterfield), a Vermont transplant who is whisked away to the East Village by his adoptive father Les (Ethan Hawke) following the death of his best friend, Teddy (Avan Jogia). Soon enough, he finds proper footing after making amends with the daughter of his father’s girlfriend (Hailee Steinfeld) and embracing the rising straight-edge hardcore scene alongside Teddy’s half-brother, Johnny (Emile Hirsch).

The true power of this film is seeing the city through the eyes of Jude. Springer Berman and Pulcini meticulously retrofitted the iconic neighborhood to bring back to life now-defunct establishments like Yafa Cafe, St. Mark’s Hotel, and CBGB’s. Not once do any of the settings feel hokey or superficial; these are lived-in, re-appropriated sets that insist upon realism. Which, to say, is quite essential considering the film takes place during the turbulent gentrification that peaked with the Tompkins Square Park riots of 1988.

These changing-of-the-times parallel the disparity between the children and their parents. Despite being a liberal pot dealer who listens to Traffic and owns a bong named Gertrude, Hawke’s Les balks at much of the underground youth scene, specifically the principles of straight-edge culture and various up-and-coming beliefs like veganism. The various exchanges on these topics provide a number of laughs, but they’re more or less enlightening to witness nearly 30 years removed.

It also helps that the film’s powered by a time-appropriate soundtrack. Select cuts from The Replacements, R.E.M., The Feelies, Black Flag, and many more are married to the historic visuals, and it’s all pretty emotional. An early scene follows Jude and Teddy skateboarding around Vermont, eventually sniffing paint thinner through a pair of panties they found under the bleachers, and it’s all set to the tune of The Replacements’ “Sixteen Blue”. It’s gorgeous stuff.

Nostalgia aside, the film excels from an allotment of strong performances: Asa Butterfield isn’t experiencing any growing pains post-Hugo; Steinfeld proves she’s here for decades to come with a shockingly adult performance; Hirsch as always rises above an underwritten part; Emily Mortimer is still British; and Hawke thrives once more as the ideal slacker dad with the script’s best lines. Everyone brings their A game.

Looking back, the script could have used a little tightening. The last third of the film stumbles over its few threads, leaning heavily on exposition and montages. There’s a revelation involving Hirsch’s character that’s tacked in clumsily, while the climactic passion between Butterfield and Steinfeld doesn’t register as it should. It’s a shame because the majority of the script is pretty sharp with nary a moment to wince over.

So, unless DeLorean Motor Company has plans for an upcoming revival of its line, complete with a working flux capacitor, it’s highly unlikely we’ll ever see the New York of yesteryear. In the meantime, Ten Thousand Saints works as an acceptable vessel to the remarkable past with an honest meditation on what a family represents in today’s day and age. It’ll tug at your heart and send you straight to your vinyl collection — that’s a good thing.